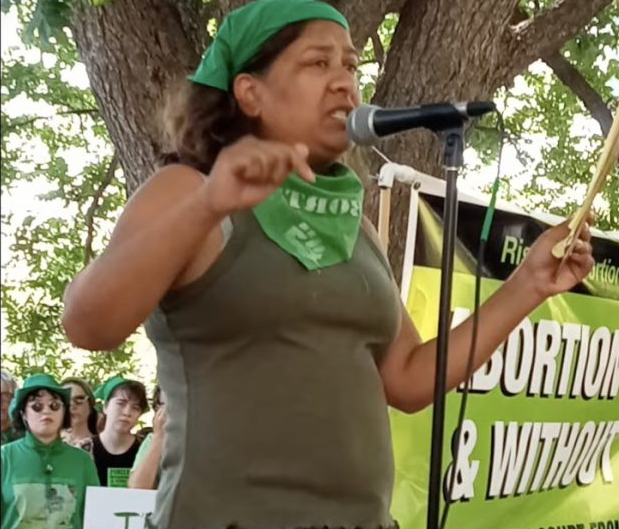 By Coco Das (REPRINTED FROM INDEPENDENT) |

A 5-4 majority on the Supreme Court has overturned Roe v Wade, the landmark ruling that guaranteed American women a constitutional right to abortion. The message this sends to women and girls not only in the US but all over the world is clear. You are not free. Your bodies are not your own. Your destinies will be shaped by the state, by the church, by men.

When Samuel Alito’s draft opinion was leaked on May 2, thousands of people poured into the streets to express their outrage. Rise Up 4 Abortion Rights, a movement that launched in January on the 49th anniversary of Roe v Wade, fought hard to prevent this draft from becoming the law. We called mass rallies across the country; staged bold, non-violent direct action; and for the past weeks have been a continual presence in front of the Supreme Court, with multiple activists chaining themselves to the Supreme Court fence and getting arrested. This is the kind of conviction and courage needed to stop a grave assault on the half of humanity that is female.

Since March I have been organizing protests to save Roe in Texas, where a near-total abortion ban outlaws all abortions after six weeks into pregnancy, long before most women even know they are pregnant. This law makes no exception for rape or incest and is enforced by anti-abortion vigilante bounty-hunters. With Roe overturned, a trigger law set to go into effect in thirty days will ban all abortions in Texas and make performing an abortion a felony, threatening abortion doctors with life in prison.

Our protests in Texas have brought out the rage of young women terrified of becoming pregnant under these conditions. Women have shared their stories of being raped and needing life-saving abortions. They’ve shared stories of getting heartbreaking news that their wanted pregnancies were not viable and facing the mortal danger of sepsis or bleeding out because they could not have the fetus removed. We’ve also heard from women who were forced to give birth against their will. They’ve spoken of the violence of forced childbirth, of feeling like surrogates or property, of their despair and thoughts of suicide. The young people who have stepped into this movement in the last few months are fighting for their lives. They have overcome their fear — some of it well-founded by the violent history of the anti-abortion movement and online threats against us — because remaining silent is not a choice.

In the 21st century, forced motherhood, based on theocratic notions of the role of women in society as breeders of children, is barbaric. The anti-abortion movement emerged out of a backlash against the gains of the civil rights movement and the social progress of the last fifty years. They could not stand a world where women were not confined to the home, where Black people were not subordinate to white people, and where LGBTQ people were out of the closet. This Christian fundamentalist, fascist, movement, which has now cohered behind the lawless ex-president Donald Trump, is further emboldened to go after all of our “unenumerated rights” with vicious vengeance.

Yet with all this at stake, the leaders of the Democratic Party have continually sought compromise with this fascist movement, ceding the moral high ground and barely saying the word “abortion.” They have stated that abortion should be “rare,” run their own anti-abortion candidates, supported the Hyde Amendment, and are loath to call their base into the streets to protest for this fundamental right. Relying on voting alone or the Democratic Party to wage this fight for us is a mistake.

Here is a hard truth. The millions of people who supported Roe v Wade but waited passively for it to be overturned sat on their real power. If more pro-choice organizations had mobilized their base into the streets like the Green Wave did in Latin America, if more celebrities had taken public stands, if more large-scale disruptive action had stopped business as usual, and if no sphere of life in this country had been untouched by this struggle, we could have changed this outcome.

Over the past few months, we saw glimpses of the fury, courage, and creativity among the people, and a real potential for millions to rise up for abortion rights. We must step up the fight and demand that the federal government reverse this unjust, illegitimate ruling. It is up to us, now, to overturn a post-Roe world in the only way any social justice has been won in this country, with collective, non-violent resistance that refuses to back down. Those behind this assault are counting on our obedience. We must not give it to them.