Everyone who opposes the Illegitimate, Fascist Trump-Pence Regime

Take to the Streets: Leave work, Leave school
Stand Up and Join In

STOP
THE TRUMP-PENCE REGIME
BEFORE IT STARTS

BRING DC TO A HALT!

What you can do today to PREVENT Trump-Pence From Ruling… 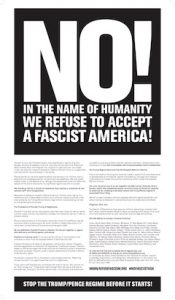 This ad with the Refuse Fascism Call appeared in the New York Times and the Washington Post.

Protesting in D.C. in the days before the installation of Trump & Pence

Emergency Meeting Calling for a Month of Resistance

In the streets:
Sight, sounds, views of people moving to STOP Trump & Pence

On May 22, a beautiful day, members of the Maya Defense Committee gathered at a cafe near the UChicago campus with an actor and member of the Maya Defense Committee who designed Maya face masks for several participants to hold in front of their faces. They also shrouded their bodies with mylar blankets, like the ones issued to incarcerated children held in cages on the border. Maya could organize with us at this cafe but not participate in the event that followed because she is banned from UChicago campus. .

When confronting a fascist regime, protest “outside the lines” is necessary and must be defended! – Defend Refuse Fascism protesters in LA and Chicago – learn more

For those unfamiliar with Diya “Maya” Cruz, Maya was arrested at UChicago and faces 7 years in prison for participating in a Silent Protest on March 1st, 2018. She and others held up signs asking that students lunching at a dinning hall on campus remain silent for 11 minutes to represent the 11 million immigrants that Trump was threatening to deport after his election win. University of Chicago Police Department aggressively threatened the peaceful protestors as they were leaving the cafeteria, grabbed Maya, physically abused her and then charged Maya with battery. Maya was the only one injured requiring a hospital visit.

The participants led by the artist moved silently through the quadrangle stopping, turning while engaging students through surprise and shock. One of the supporters passed flyers and engaged students and visiting parents.  As we walked slowly toward and around the central quad of the campus, students came up requesting flyers. Some of the students wanted more information about Maya and the charges she faces; others were already aware of the case. Quite a few students and parents expressed shocked at how Maya’s rights of free speech were violated at a renowned campus like UChicago.

In conversation with students we described Maya as a member of the Revolution Club Chicago whose members are dedicated to the creation of a better world. We asked students: “Is this is a crime?” All answered with an emphatic “No!”  Students were challenged to put the demand to university President Zimmer and the UChicago to drop the charges. Many of the students in the quad were sun bathing on a rare warm spring day and would not bother themselves to learn about why we were dressed in Maya Masks—we had the feeling that it might be finals overload or just conditioned aloofness to the important events in their world.

When we had finished the walk around the quad we regrouped in the cafe to review our experiences. All felt that it was very worthwhile and we had distributed flyers to many and peaked the interest of more students and support for Maya. We reminded all to pack the courtroom for the next Court Hearing on June 25th.

The Trump/Pence Regime Is Illegitimate.

Trump lost the popular vote by almost 3 million. He won in the electoral college –founded to reinforce slavery, used since to embed inequality in voting. Trump has no “mandate”. More fundamental: Trump promises to inflict repression and suffering in this country, to deport millions, to increase violence up to the use of nuclear weapons internationally, and to inflict catastrophes upon the planet itself. He has assembled a cabinet of Christian fundamentalists, war mongers, racists, science deniers, and woman haters. His entire regime is illegitimate, and must not be allowed to rule. We REFUSE to accept a Fascist America!

John Lewis declared “I don’t see Trump as a legitimate president” because he said Russia interfered in the US election. Trump repeatedly attacked Lewis on twitter saying he should focus on fixing his district, and “burning and crime-infested inner cities”. Evoking stock-in-trade white supremacist imagery, Trump’s attacks on Lewis, a veteran of the historic 1965 Selma march for voting rights, is outrageous.

John Lewis is right: Trump IS illegitimate. But NOT because of Russian meddling in the election but because of the fascist character of the Trump/Pence regime and what they are planning to do. See the Call to Action for more on this. No election, whether fair or fraudulent, should legitimize this.

Fascism on the March

Trump refuses to allow CNN to pose question, calls them “fake news” for reporting the existence of a compromising dosier on him. Muzzling of any opposition, including critical reporting from the press, is a hallmark of fascism. A Trump-Pence regime must not be allowed to rule.

NO! Stop this fascist regime before it starts.

From the streets: sights and sounds of people moving to STOP Trump & Pence.

Rev. John Beaty:Why I believe that both Trump and Pence are not fit to be President and Vice President

This is why I believe that both Trump and Pence are not fit to be President and Vice President of the United States of America:

They have lied to the American people. They claim to be for the American worker, but have done everything they can to withhold fair wages, and not to honor our right to protect ourselves by collectively bargaining with our employers. They have claimed to represent the forgotten citizen, when they have tried to take away our right to healthcare, our right to breathe clean air, to drink clean water, to eat food that is not poisoned with pesticides and cancer producing additives, to know what they are doing in collusion with megabillionaires, mega corporations, megabanks, and mega polluters.

They have promised to make America Great Again, but they are destroying the America that is struggling to be a beacon of freedom, prosperity, inclusiveness, kindness, fairness, and equal justice for all.

They prey upon people’s fear, anxieties, and prejudices to divide us from one another and to provoke us to violent conflict.

They are utterly corrupt with secret deals with shady foreign and domestic influences that enrich the favored few at the expense of the unfortunate many.

They seem hellbent on destroying our climate, our environment, our wildlife, our national parks and monuments.

They are enhancing a system of taking from the many poor and giving to the richest few of our citizens.

They are criminalizing and incarcerating blacks, Hispanics, Muslims, the poor.

They are encouraging the most zenophobic, racist, misogynistic, homophobic elements of our society.

They are taking money from needed programs and spending it on unnecessary walls, prisons, weapons.

They are threatening the Constitution of the United States in a lust for power, privilege, and partisanship.

This Nightmare Must End! The Trump/Pence Regime MUST GO!

This is my belief!

Refuse Fascism Faith Task Force: Time for our religious communities to join together to stop the atrocities of the Trump/Pence regime

From an interview with Rev Frank Wulf

“What’s going on here is that faith has played a major role in the politics of the United States. It’s done this for years, and as often as not, faith has been used to justify absolutely appalling policies. One of the most recent of those, of course, is the separation of children from their parents, and then subsequently the incarceration of families together, and there’s a whole mess around the ‘no tolerance’ policy of the Trump administration. Faith has been used as a tool to justify these kinds of abhorent policies over the years, and we are feeling a really important need. For those of us who are part of the faith community, who do not believe in these kinds of policies, and who believe in justice, and who believe in the kind of world where everyone can live safely and fairly and justly together, that we need to start speaking up. We can’t just simply remain silent and allow the kinds of policies that we’re seeing done in the name of faith to continue to be done…”

Listen to / read the entire interview with Rev. Frank Wulf and Ramona Toliver of the Faith Task Force of Refuse Fascism on the Michael Slate show on KPFK, Pacifica Radio, Los Angeles here.

Watch / share this event presented by the Faith Task Force of Refuse Fascism:

“I Am My Brother’s Keeper – The Trump/Pence Regime Must Go.
We must do this for the future of humanity and the planet”

NO U.S. BOMBING OF SYRIA!

Trump Doesn’t Give a Damn About Children and Babies

Fascist Attack on the Rule of Law

The rule of law is under serious attack—and this is part and parcel of a fascist restructuring of society.

Trump and his cabal are packing high-level courts with fascists and fascist-enablers, all the way up to the Supreme Court. And they are discrediting, bullying, and whipping up their base against, and threatening to simply ignore, court orders that get in the way of their aims.

Trump’s assault on the rule of law is overt. After courts issued temporary injunctions against his ban on Muslim immigrants and refugees, his henchmen issued threats like “[O]ur opponents, the media and the whole world will soon see, as we begin to take further actions, that the powers of the president to protect our country are very substantial and will not be questioned.” This is Hitler talk.

END_OF_DOCUMENT_TOKEN_TO_BE_REPLACED

Why We Need A March For Science

A Q&A with March for Science co-chair Valorie Aquino

On Earth Day (April 22), the March for Science will take place in Washington, D.C. Following the presidential election in November, many people started raising concerns on social media about federal budget cuts and other policies that could threaten scientific research. Hashtags like #StandUpForScience gained popularity and galvanized local rallies, like this one held in Boston in February. In the middle of this growing movement, an international coalition of scientists and advocates came together to make a national march to draw attention to these concerns. Valorie Aquino, co-chair for the march and current Ph.D. candidate in anthropology at the University of New Mexico, offered MTV News some insight into why this march is necessary, the importance of scientific contributions to society, and how science is connected to social justice movements.

MTV News: People are familiar with calls to action for causes like gender equality, LGBTQ rights, or racial justice, but what does it mean to protest for science?

Valorie Aquino: We’re protesting government policies that misrepresent, silence, or outright reject scientific evidence. Scientists also have a long history of speaking out about their work and actively engaging in civic debates: Einstein made efforts [to advocate for] peace and civil rights and researchers came to the aid of Flint, Michigan residents by testing their drinking water. Standing up for science includes standing up for how science is applied in society. END_OF_DOCUMENT_TOKEN_TO_BE_REPLACED

Jussie Smollett of his powerful, timely new video, “This song is for the oppressed. That’s why I feel like people will connect with it because it is very broad, because oppression is so broad”.