Could It Happen Here?

Is It Happening Here?

What Is the Danger that the Trump/Pence Government Poses? 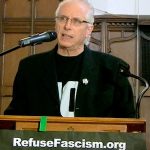 “The essence of fascism as a form of rule of a capitalist society is blatant dictatorship, that when it is fully imposed will mean the virtual elimination of basic democratic rights, including the right to dissent. And such change is most definitely now afoot…” Video and transcript 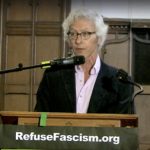 “There is a window in which it’s possible to act. But once that comes down, you’re in a whole other reality and there’s no way out… I hope that all of us do everything in our power to seize this hour… ” Video and transcript

“No, it’s not the next election—it might not be any election. I worked at the election, actually, and I woke up and I had, maybe, five minutes or so, to get upset, and then it was time to get back to work…people have, for too long been in their comfort zones…we have to make a pledge to ourselves now, every single day to step out of that normal comfort zone… ” Video and transcript 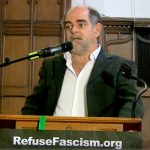 “You’ve got to go to war with science if you’re a fascist, because if you have absolute authority you get to say what’s true… And we’ve seen with Trump just an extraordinary war on science… ” Video and transcript

Humanity faces an extreme emergency with Trump’s rise to power. On April 27, this nationally live-streamed Teach-In deeply explored, from different perspectives, the essential nature of the Trump/Pence Government, the relevance of the history of fascism, the threat it poses to humanity and the planet itself, and the dangers of normalization.

What you can do now! A challenge from a new organizer.