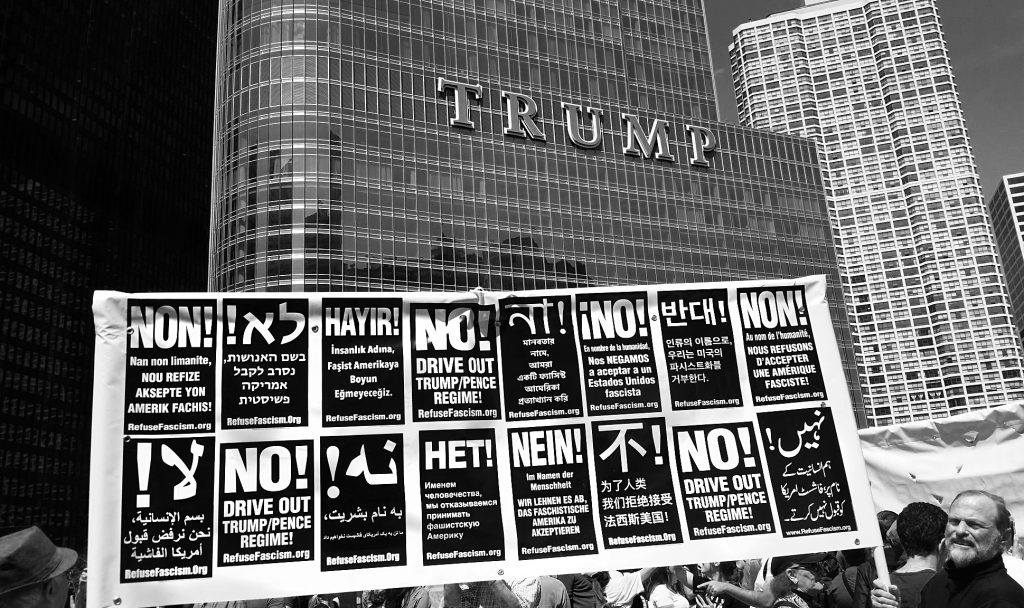 May 1st: Come out on May 1st! Stand with Immigrants Under Attack!

Carry a sign that says, “NO! In the Name of Humanity – We REFUSE to Accept a Fascist America,” in one of several languages – English, Spanish, Arabic, Farsi, French and more – showing the whole world that people here are standing with them against the attacks of the Trump/Pence Regime.

Carry one of these NO! signs and/or organize a NO! Contingent that carries this NO! in a multitude of languages. Stand with people from all over the world as immigrants are being demonized, terrorized, dragged from their homes, or living in fear that the government will jail or deport them and everyone else is being told to stand aside and turn their backs.

By carrying this NO!, show your opposition to Donald Trump’s hideous “America First” ideology and program.  Say NO! to Trump’s Nazi-like Declaration proclaiming that May 1stshould be “Loyalty Day” – when it is clear he means “Loyalty” to “Making America White Again” and threatening people of the whole world with his war moves. 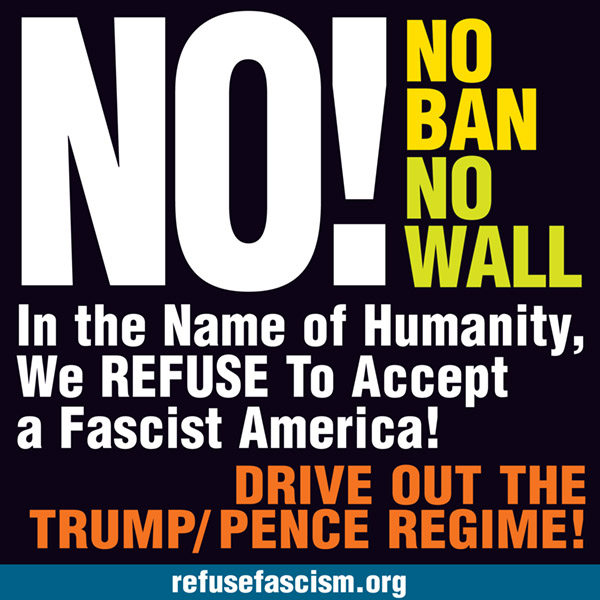 Join with others all across the country to say:

No Ban! No Wall! No Deportations!  No Fascist USA!

Drive Out the Trump/Pence Regime!

In the Name of Humanity, We Refuse to Accept a Fascist America!

**Wherever you are, click here to print NO! Signs in English, Spanish, Arabic, Farsi and many other languages.

**Volunteer to carry and help distribute these Multilingual NO! signs in your city.

**Print and distribute copies of the Refuse Fascism Call to Action in English here and in Spanish here.

**Want some good chants to chant while marching?  Try these: Chant Sheet

**Print and distribute stickers that say NO!

Be sure to take pictures of yourself and others with these signs and email us at: [email protected] or Tweet them and tag us at @RefuseFascism

Join a Refuse Fascism Contingent in These Cities

New York: 1:00 pm Meet up with the Refuse Fascism contingent at the Arch at Washington Square Park. (map) NYU students are walking out at 1:30 pm as part of NYU Sanctuary.  The Immigrant Worker Justice Tour leaves at 2:00 pm to go through Lower Manhattan.

4:00 pm Meet up with the NY Refuse Fascism contingent at the south end of City Hall Park, Broadway and Barclay. (map) Our contingent will march to the MAY DAY! Rise Up, NY! For Immigrant and Worker Rights! Foley Square, 111 Worth Street at Lafayette which begins at 5:00 pm (map)

Boston: 5:00 p.m., Boston Common, downtown Boston – Refuse Fascism contingent will gather at Parkman Bandstand in Boston Common, (map) and march to Copley Place in the May 1st #BostonMAYDAY Resist Deportations! march.  – Look for our banner – “NO! In the Name of Humanity, We REFUSE to Accept a Fascist America, Drive Out the Trump/Pence Regime”

Chicago: 11:30 a.m., the Refuse Fascism contingent will meet in Union Park, near the intersection of Washington and Ogden (map), then join in the May Day Chicago city-wide actions to stop criminalization and defend immigrant rights – Chicago Fights Back / Chicago No Se Deja. Join us starting at 11:30am to distribute NO! signs and May 1st pluggers, invite gathering protesters to join our contingent. Rally at 1pm in Union Park; 2pm march, 4pm rally in Daley Plaza. Contact [email protected] or @RefuseFascismChicago on Facebook.

Cleveland: 4:00 p.m., the Refuse Fascism contingent in the Cleveland May Day Coalition will Assemble at the Free Stamp, 1182 E. 9th Street, Cleveland. March to Public Square for May Day rally. (map)

Oakland: 3:00 p.m., Hook up with Refuse Fascism at Fruitvale Plaza (near Fruitvale BART, map) for Oakland May Day: A Day Without Immigrants. Look for the NO! banner. Gathering together where the march starts and then marching to end up for rally from 5:30-7:00 p.m. at San Antonio Park on Foothill between 17th and 18th Ave. (map)

San Jose: 3:00 p.m., Join the Refuse Fascism contingent at the May 1, 2017, Build Bridges Not Walls! March, Mexican Heritage Plaza, 1700 Alum Rock Avenue, San Jose (map). Look for the Refuse Fascism contingent NO! banner to join the march from the plaza in Silicon Valley May Day: Shut it Down! General Strike, to “tear down the walls of bigotry, economic inequality, patriarchy and alternative facts.”

Seattle: 11:00 a.m., Refuse Fascism Contingent meets outside The Moonlight Cafe at 1919 S Jackson St. (map) then joins the 18th Annual May Day rally March for Workers and Immigrant Rights at Judkins Park, 2150 S. Norman St (map). The march to downtown Seattle begins at 1:00pm and by 3:30-4:00pm will end at Fisher Green, Seattle Center,(305 Harrison Street) (map) , south of the International Fountain with a cultural event.

Tucson: March and Rally, El Casino Ballroom 437 E 26th, St, Tucson (map). Look for Refuse Fascism table at the beginning and end of the rally, meet us there Facebook

Don’t see your city? Click here for help organizing your own contingent, and feel free to call our national office for help.