Impeachment protests took place in cities across the country on July 2. Below are reports and pictures from some of those cities.

Refuse Fascism brought a much different message: In the Name of Humanity We Refuse a Fascist America and protest July 15th – the Trump/Pence Regime Must Go!

From the very beginning dozens of organized fascists tried to disrupt the protest.  At the rally, Refuse Fascism and others blocked the fascists with signs and isolated them.  During the march, the fascists positioned themselves at every corner on Congress and attempted to provoke confrontations, as the protestors chanted No Trump, No KKK No Fascist USA or Hey, hey, ho ho, fascist Trump has got to go.  At city hall, the march became disorganized and the fascists were able to surround and split up the march.  At least half of the protestors left after that and the rally at the State Capitol became very contentious with the fascists attempting to take the stage.  The protest ended with no arrests.

Los Angeles  Several thousand people took to the streets in downtown Los Angeles on Sunday in the Impeach March. The march was lively as protestors chanted, “No Trump, No KKK, No Fascist USA,” and Hey, Hey, Ho, Ho, Donald Trump has got to go.” Refuse Fascism had a militant contingent that chanted, “No Ban, No Wall, the Trump Regime must fall,” and “Danger, Danger, Fascist in the White House. It’s up to us to drive them out.”

The contingent passed out tons of “NO” signs that became the main sign carried by people in the march. The contingent also announced the demonstration to Drive out the Trump/Pence Regime that will take place in Hollywood on July 15th . The march was made up with mainly middle class people, and it seems that a few more of them are bringing their signs to these marches in opposing Trump as a fascist. 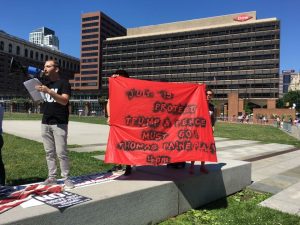 organized by two people without organizational affiliation, one who had never protested before. 100-200 people had gathered the initial rally, including a few who brought their own NO! Signs. Refuse Fascism was able to read the July 15th Call to the crowd before the march kicked off. One of our organizers urged people to see that there  there is no official mechanism for what must be done. Driving out a regime is only something that the people can rise up and do. People jumped in to hold “NO!” signs and banners for the march. Marchers chanted “NO Trump, NO KKK, NO Fascist USA!,” “No Ban/No Wall/The Trump Regime Must Fall” and “Impeach Trump.”

At the speakout at the end of the rally, people spoke out about the dangers posed by this regime and the necessity to act now. A Refuse Fascism organizer spoke about her Japanese family’s internment and a Jewish woman whose parents escaped Nazi Germany spoke of how that can happen here and how it is happening here. A man from the Jersey shore spoke about how he is outnumbered there but that that cannot remain the case and how our anger is good and so is our love and we must do both and that you cannot be a spectator in life. Two young women spoke about how they cannot stand by and, and how black people’s lives need to start mattering to everyone, that Black people need support and love and how horrible it is that in their early 20’s they are already tired of racism and everything they have to put up with. Each of these people committed from the mic to show up on July 15th and called on the crowd to do the same. Many people left excited to come to the organizing meeting for July 15th.