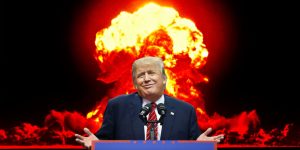 The Trump/Pence fascist regime has escalated the threat of war against North Korea. This, in response to missile tests by the North Korean regime. Any U.S. military action against North Korea—according to all commentators and experts across the spectrum—will have devastating consequences in destruction and loss of life, especially in the whole Korean peninsula. And military action could possibly escalate to nuclear war.

Trump himself is dictated by an “America First” worldview and policy, with little restraint or doubt on “first use” of nuclear weapons. The Bulletin of the Atomic Scientists has moved the doomsday clock on the danger to humanity—stemming from use of nuclear weapons—to 2.5 minutes to midnight, the greatest threat since the Cold War era of the 1950s.

In the Name of Humanity—from the standpoint of the people of the world—this is unacceptable, and cannot go on. The world cannot be held hostage to this fascist regime’s threats of war. Drive Out this Regime, at the soonest possible time. Protest and demonstrate this July 15 with the demand that the Trump/Pence Regime MUST GO!

People may find solace in the thought that civilized norms and warnings and fears of unchecked destruction will restrain Trump, force him to other options like “diplomacy.” That the “adults” in influential positions—the experts and the U.S. military itself—will restrain him and carry the day.

NO! Trump has shown repeatedly—over and over again, from the very first day of his campaign—that he does not give a damn about humanity, or about norms, in pursuit of his worldview and goals. When will people learn?

People may find solace in the thought that “the international community,” the UN, and efforts from China and Russia, will restrain Trump.

NO! The war threats against North Korea are about “America First”—and Trump is NOT going to be “checked” by other powers, who are reactionary gangsters themselves, but intends to steamroll over them if he can’t bend them to his will and intent. China has its own strategic interests in the region, as does Russia—Trump knows this and is not going to abide by their moves and plans unless it serves American imperialist interests.

What this means for the people of the Korean peninsula and the world is a dangerous game of nuclear brinksmanship, Mafia style, with potentially horrific consequences for humanity. When will people learn?

What Trump and the U.S. Have Done to the World

In response to the missile launch, Trump tweeted, “Does this guy [Kim Jong-un, the leader of North Korea] have anything better to do with his life?”

Imagine if you turned that around to Trump. Doesn’t Trump have “anything better to do” with his life than to terrorize and deport immigrants… bomb people in Syria, Afghanistan and Yemen… deny people health care and LET THEM DIE… ban people based on religion… threaten other countries at will and whim… deny women basic rights of equality… threaten Black youth in Chicago on a periodic basis… and the list goes on and on.

Pulling the lens back on history, didn’t the U.S. rulers have “anything better to do” than to drop nuclear weapons on Hiroshima and Nagasaki… carpet-bomb and napalm-bomb Vietnam and Cambodia… repeatedly invade Latin American and Caribbean countries in the 1900s… depose democratically elected rulers who don’t do their bidding—in Iran, Guatemala, Indonesia, Chile and more…?

Remember How the U.S. Has Justified Wars and Mass Murder

People may think, as the media and other voices trumpet, “But doesn’t Kim Jong-un have to be stopped—isn’t he a madman? There isn’t any choice but to support U.S. military action if it comes to that, is there?”

Remember, this is the same playbook of demonization the U.S. has run against anyone they seek to depose or overthrow or go to war against. Remember Qaddafi, Saddam Hussein, Manuel Noriega—weren’t we told that “they have to be stopped”? And remember how the lies about “stopping weapons of mass destruction,” “saving lives,” and so on were used to justify the invasions, bombings, and occupations in many areas of the world that have led to the violent murder of hundreds of thousands of people and tens of millions being forced out of their homes?

The development of these capabilities by the North Korean regime is changing the “balance of power” in this whole region—potentially constraining the ability of the U.S. imperialists to dominate and wield influence in this region. This is deemed unacceptable by the powers that be on “both sides of the aisle”—from the Trump/Pence regime to the Democrats and Obama, to the military and the national security establishment. The interests of these rulers are sharply and profoundly opposed to those of the great majority of people here and around the world.

This is about U.S. domination and great-power rivalry, now escalated in doctrine to Trump’s America First. For those who say, “There are no good options,” please consider: whose voice and viewpoint are you reflecting, even parroting? From whose standpoint are there “no good options”?

From the standpoint of humanity, or from “America First”?

Stop thinking like an American. Start thinking about humanity.

July 15 Protest and Demand: THE TRUMP/PENCE REGIME MUST GO!
Find the protest near you. Facebook.