Take To The Streets And Public Squares in cities and towns across the country continuing day after day and night after night—not stopping—until our DEMAND is met:

This Nightmare Must End:
The Trump/Pence Regime Must Go!

In the Name of Humanity,
We REFUSE to Accept a Fascist America! 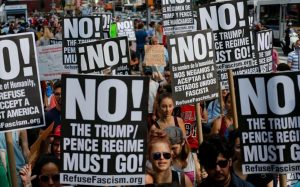 On August 19th, 450 people gathered in five regional conferences held around the country by Refuse Fascism to get organized to make November 4 the launch of a massive national mobilization that continues and grows day after day and night after night until their demands are met: This Nightmare Must End: The Trump/Pence Regime Must Go!

Coming in the wake of Trump’s defense of white supremacists and Nazis after they carried out brutality and murder in Charlottesville and Trump’s recent bellicose threats to unleash “Fire and Fury” against North Korea, the gatherings had an air of seriousness and determination. For many in attendance, this kind of organizing was new but they felt strongly that protest-as-usual, while necessary, will no longer suffice. They were drawn to the slogan, “This Nightmare Must End: The Trump/Pence Regime Must Go!” and they were looking for a way to invest their time and energy that really stood a chance of stopping the Trump/Pence nightmare that grows uglier by the day.

Video of Heather Heyer’s mother, Susan Bro, challenging everyone to live like Heather by stepping up against injustice was played to open the conference. Next, people listened intently and then wrestled together with speeches which laid out a vision of what November 4th and the days and weeks that follow must look like to succeed in creating the kind of political crisis in this country that forces every faction of those in power to respond to our demand that the Trump/Pence Regime Must Go! and why the fascist character of the regime makes this possible and makes anything less completely inadequate.

Read: WHY the Fascist Character of this Regime Makes it Possible and Necessary to Mobilize Millions to Drive it From Power

In a second plenary and then in smaller planning break-out groups, plans were made to begin bringing forward many thousands to launch the November 4th movement – the need for medics and lawyers, the role of students and faith communities and leaders, the role of professional associations and community groups. Plans were also made for social media and fundraising, for both organizational and street level outreach, and for reaching out to and involving students and campuses – with particular attention put on really kicking out the jams to raise funds. At the East Coast regional conference a plan was made to do the kind of widespread and attention-grabbing promotion so that by soon after Labor Day, September 5, everywhere you go, people will know that on November 4th It begins and that there is a powerful Call and a plan that is circulating in the minds of millions throughout this country. 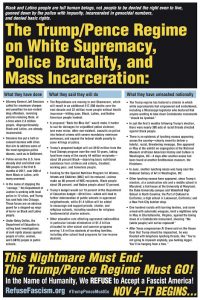 Special focus was given to the extremely powerful indictment panels that have been developed by Refuse Fascism which detail the many crimes that the Trump/Pence Regime has already unleashed against Muslims; against immigrants; women and LGBTQ people; against civil liberties; against the people of the world; against the environment: and around white supremacy, police brutality and mass incarceration. These posters – which can function as very large panels set up in public spaces and protests, as well as infographs online or a series of regular sized flyers, and in other creative forms – have three critical roles: first, they educate people about the full scope, scale and depth of fascism this regime is imposing; second, they can be used as a form of political action and protest (for example, confronting members of the Regime with these panels or protesting with them outside media that is refusing to cover these crimes); third, they are a means through which people can get organized (they can be printed and discussed in house-gatherings, folks can take them out on the street, they can be used in teach-ins and in many other ways that enable people to get organized and get out together spreading the word).

These conferences represented an important leap in the level of seriousness and organization towards November 4th, but – not surprisingly – there remains much work to be done to reach out to and involve other forces, to boldly and creatively project the November 4th vision to millions of people, to raise serious funds, and much more. Further fleshing out the plans and seizing on new openings that emerge will be critical, but at the same time it is necessary that the plans that were forged be fought through on and that not a single day be wasted.

As the New York City Regional Conference drew to a close, the emcee asked everyone to think about the immigrant families who are aching already from having been torn apart, the people throughout the Korean Peninsula living in terror because of Trump’s nuclear threats, and the many others targeted and horrified by the Trump/Pence fascist Regime. “These people don’t know that we met here, today,” she told people, “But they are counting on us. Millions and millions just like them are counting on us. We must make a commitment to follow through on this, to work together, to go out and fight for everyone else, to persevere in the face of risk and even sacrifice, to solve problems and keep thinking big and working to make it real.” With that, everyone put their fists in the air and joined in repeating a promise to seal their commitment: “In the Name of Humanity, We REFUSE to Accept a Fascist America! This Nightmare Must End: The Trump/Pence Regime Must Go! Don’t Accommodate. Don’t Conciliate. Don’t Normalize. Don’t Collaborate. Drive Them Out! November 4th – It Begins!”

We encourage everyone to join in immediately:

Stay tuned for more at refusefascism.org.