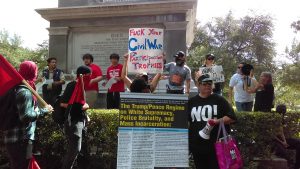 September 24   On Saturday in Austin about 300 people from different groups held a unity march against white supremacy. Initially this was planned as a counter-protest to the fascist “dixie freedom rally” that the fascists ended up cancelling. Refuse Fascism joined with people from organizations with varied viewpoints including Democratic Socialists, International Socialists, Antifa, the Brown Berets, oh shit what now, and Fight for 15. As we formed up, people took up Refuse Fascism’s indictment pamphlets, calls for November 4, and the statement on antifa.

We marched to the State Capitol, and exposed the history of several confederate statues, chanting, “take them down”. A speaker from Refuse Fascism energized and focused people to come together in the streets of on November 4 to demand the Trump/Pence Regime must go. As we were winding down, a fascist provocateur seized the mic and several confrontations erupted, instigated by the police. Two people were arrested. 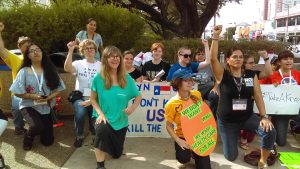 On Sunday, we joined with other progressive groups in Austin, including Indivisible, Children’s Defense Fund-Texas, ADAPT, Coalition of Texans with Disabilities, United We Dream, and others to protest a speech by senators Ted Cruz and John Cornyn on the Graham-Cassidy healthcare bill. 200 people protested in front of UT Austin and later marched to the hall where the hearings we held. Several people testified about what the loss of healthcare would mean for them and their families. A mother talked about how without healthcare, her son with diabetes would be dead in 3 days.

Several people took stacks of materials to take back to their groups to take up November 4. One woman carried a sign she made and said as she started listing the people being targeted by the Trump/Pence Regime, that it was eye opening, and she couldn’t believe how many there are.