By Coco Das (with contributions from Sarah Roark) 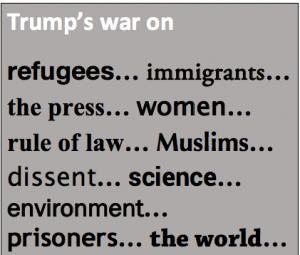 The “wars” of the Trump/Pence regime dominate the headlines. Google “Trump’s War on…,” then pick a topic that you care about, and you will find out what the agenda of the fascist Trump/Pence regime is, cruel America first chauvinism, white supremacy, a return to oppressive patriarchal control of women, a culture against diversity, truth, and critical thinking. Trump is Quietly Winning His War Against Refugees, How Trump Can Win – and We Can Lose – the Media War, Trump Escalates the War on Women, President Trump’s War on Science, Trump’s War on Immigrants, Immigration Arrests of Noncriminals Double Under Trump

In each of these, to varying degrees, there has been resistance. People have been protesting in courageous, determined, and creative ways, especially most recently to defend immigrants from the all-out vicious assaults by this regime and its enforcers. This is vitally important. We must not allow this regime to get away with its crimes, and each outrage must be met with greater and greater resistance. The resistance must go broader and deeper, bringing in more people from every part of society to stand up and say no.

How big is the leap from the protest people are doing now to actually driving out the regime that is initiating and escalating these wars? If we have greater occurrences of protests, with bigger numbers, will that help create a sustained movement and a political crisis that can drive out the regime, even without a specific demand that Trump and Pence must go?

To answer this, we have to deal with the full picture of what this regime is doing, not what we hope is true. There is a key statement in Refuse Fascism’s founding call that is worth going back to:

We must recognize that the character of fascism is that it can absorb separate acts of resistance while continually throwing the opposition off balance by rapidly moving its agenda forward.

This crucial understanding of how fascism consolidates leads to the conclusion that we must mobilize millions to drive out the whole fascist regime. So, why do we say that fascism can absorb separate acts of resistance? And how does that contribute to the analysis of what fascism is, what it means for humanity, and what we must do to stop it?

Fascism can absorb separate acts of resistance because it wages battles on many fronts, with the aim of entirely remaking society and government. These attacks are fast and furious and shocking, trying to wear down our opposition and build up our tolerance. And while fascists cannot implement their whole program at once, these attacks do happen on many fronts simultaneously and are carried out by different parts of the regime and their collaborators. If it encounters a setback on one front, it can go forward on another aspect of its program while it regroups and comes up with another strategy. Look at the different iterations of the Muslim Ban. The first one was met with fierce opposition, but the last one, even while encountering some challenges in the courts, has effectively banned travel from several Muslim majority countries and controls the number of Muslims coming into the country, especially refugees fleeing desperate violence. In the meantime, the regime marched on with its war on immigrants, on science, on the environment, on women, and the reality is that they are not losing any of these wars.

Fascism can absorb separate acts of resistance because it is not beholden to the rules and constantly changes the rules. Trump was chosen to lead the fascist Republican party, and was elected through the electoral college, based on a promise to tear up the norms of politics. Even mild opposition at the top levels of government are thrown off balance by the chaos, instability, and seeming lunacy of this presidency. There is a madness to it, but there is a method to the madness, allowing the regime to go forward with its violent reassertion of white and male supremacy and tyrannical threats to the rest of the world. And from the top to the leadership to the street-level vigilante thugs, nothing is really out of the question, not violence, terror, or even nuclear weapons. When we listen to accounts from people who have been targeted by the regime, (as in this interview with immigrants rights activist Ravi Ragbir), we hear again and again that basic principles that were once barriers to detention and deportation are no longer honored, lines that were once not crossed are erased, and rules that were once adhered to no longer matter. In the end, what most strategically becomes the new norm is a pervasive culture of cruelty and a tolerance for genocide. Along the way, resistance is not only absorbed but crushed.

In some of my conversations in the past few months, people have brought up the point that there is resistance, that people have been protesting. Depending on the context of our conversations, they might bring this up for different reasons. With further probing, some version of the following comes out:

People have been protesting. Other people are already doing what you’re calling for.

People have been protesting. We should join up with them until they’re ready to drive out the regime.

People have been protesting, especially people who are most under attack. We should listen to those organizers on the ground fighting for their communities and be good allies.

There does not need to be a separation between these protests and a movement of millions to drive out the regime. We must keep protesting each outrage, and we must see how each of these attacks fit into the overall consolidation of fascism. But behind this point – people are already protesting – are more questions that don’t always get voiced. Isn’t what we’re doing enough? Can’t we win this way? Shouldn’t the communities under attack lead their own movements? Is driving out the regime really necessary, really possible, and is it really our responsibility? There is only one answer to this. If we do not drive out this regime, we will be crushed, and millions, perhaps even billions of lives will be destroyed. What are we giving up in our solitary fights, and what prevents us from uniting?

Imagine if at every protest, for immigrants, for women’s reproductive rights, for impeachment, for Black lives, there was a resounding call for an end to these attacks and an end to the regime that is escalating them? What if all of the social justice groups called their supporters out for two weeks of strategic, sustained protest against all of the wars this regime is waging, finding ways for thousands and tens of thousands more to join up in the struggle? There are many ways this leap, from separate acts of resistance to a mass movement and political crisis to drive out the whole regime can happen. It isn’t that big of a leap, because there are millions of us who care about humanity and don’t want a nightmare, fascist future. We don’t know how long we will have this opening, but for now, we have the means and the knowledge to create a leap in the resistance and win a victory the whole world will celebrate.