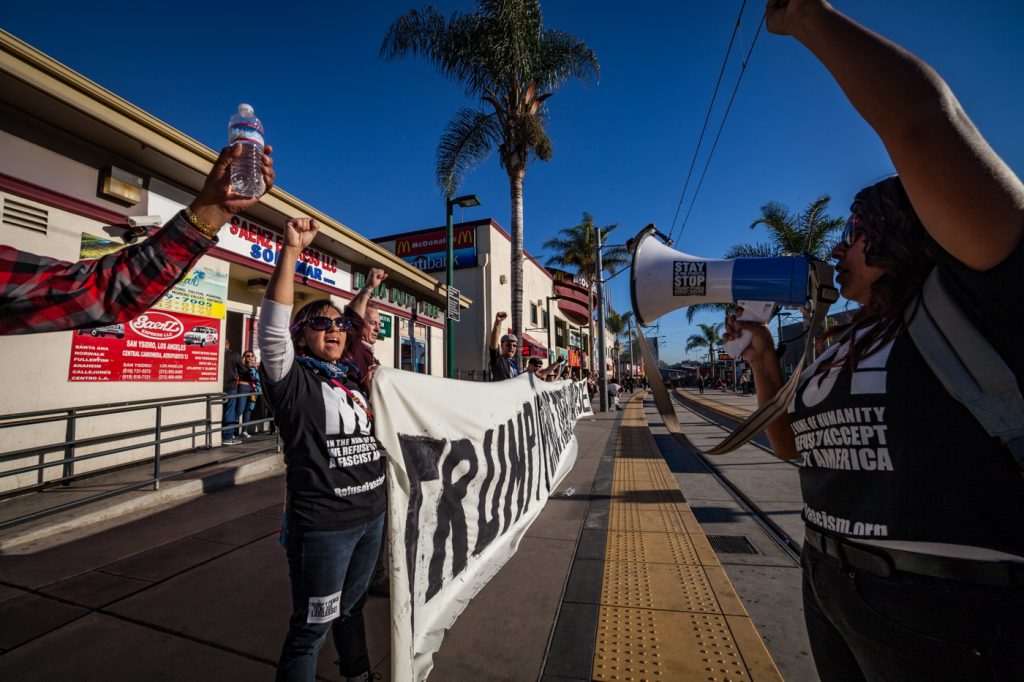 On Saturday December 8, RefuseFascism.org mobilized people from Los Angeles County, San Diego County, Orange County, and Riverside County to unfurl a 100 foot banner at the U.S./Mexico border in San Ysidro, CA that read “Trump/Pence Regime Must Go / Trump y Pence Tiene Que Largarse.” This action was made possible by support from across the country, including people who contributed funds to make the 100 foot banner, for transportation and for the printing of Refuse Fascism’s Call to Action in Spanish (which was distributed to people in San Ysidro during the event). A range of news media reported on and documented the action. And you can catch this powerful intervention on video.

In the midst of an escalation in the military occupation and repression of the border and the humanitarian crisis associated with the Migrant Caravan from Central America, the action pierced the suffocating, repressive atmosphere prevailing in the border region. Some of the people who participated in the action had recently spent time in Tijuana assisting the Migrant Caravan. They shared heartwarming stories about why they went to TJ to help and of the attitudes and conditions of the migrants, and how this action was timely and urgently needed.

Hundreds of Mexican people who’d just crossed the border were jolted by the boldness of this action, especially because it called for the removal of the fascist Trump/Pence regime. It was eye-opening to people that such an action could even happen in the area, especially given the militarization over these past several weeks, and it provoked discussion over whether such an objective (driving out the Trump/Pence regime) was possible.

At the San Ysidro Transit Center (the southern terminus of San Diego’s Metro system), there was an attempt to stop the event by different law enforcement organizations. The San Diego Police and SD Transit Police threatened to cite the entire group as California Highway Patrol and Department of Homeland Security circled around the action. But people who participated were firm and undeterred, with the action commencing with a startling protest right in front of the U.S. Customs and Border Protection Building at the the San Ysidro Port of Entry. The California Highway Patrol shut down the vehicular traffic at the last freeway off-ramp leading into Mexico on the U.S. side when the event marched on and over the the vehicular bridge on the U.S. side. The huge banner was then taken to the border crossing station and then the southern most fence at the U.S./Mexico border crossing.

Refuse Fascism built for the event with this framework: “The same regime that fired tear gas on children in Mexico and puts children in concentration camps here, just gave their backing to the brutal murder and dismemberment of Saudi dissident journalist Jamal Khashoggi, and dismissed their own government’s latest report on the escalating global emergency of climate change. This regime is a danger to all of humanity which is why we are saying, In the Name of Humanity, the Trump/Pence Regime Must Go!… The LA chapter of Refuse Fascism is traveling to the U.S./Mexico border, the epicenter of the Trump/Pence fascist regime’s white supremacist assault on immigrants and migrants, which is a linchpin and battering ram of their larger fascist remaking of America…. We are organizing a movement to drive out the Trump/Pence regime and this planned afternoon in San Ysidro is part of this movement.”Refuse Fascism is planning a new border action on International Migrant Day, Tuesday December 18. We need support from people throughout the country who yearn to see the Trump/Pence regime removed from power by the people in their thousands and millions. The following comments from people who participated in this action illuminate why they participated and the impact it had on the people and on the movement to drive out the Trump/Pence regime. 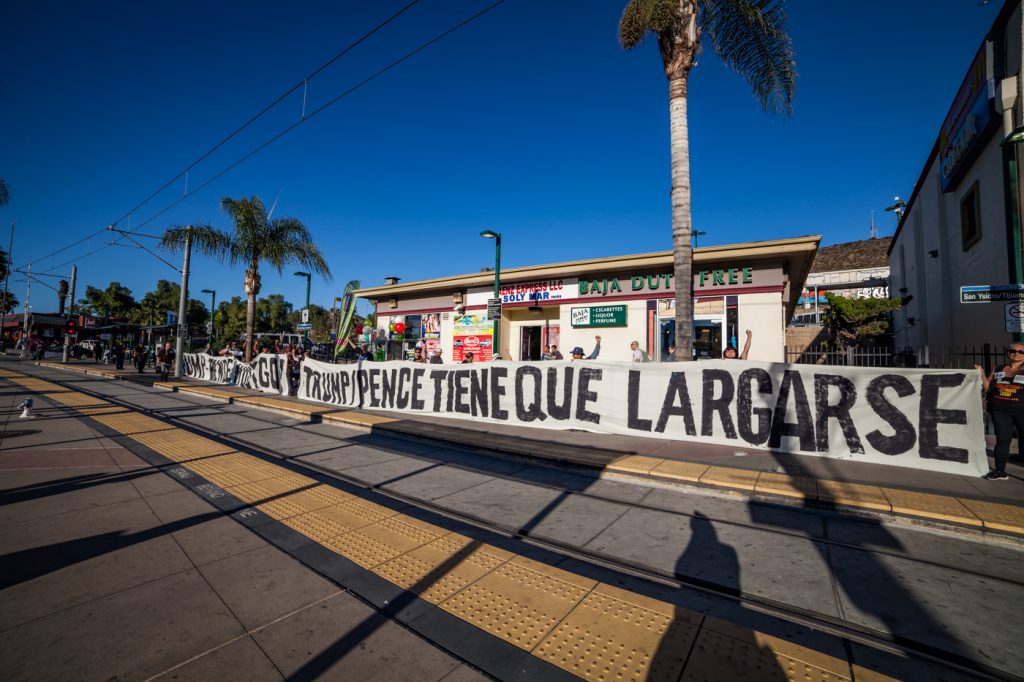 Thoughts from partipants in the action:

“I came to the border because more people need to know we have a fascist regime that is separating families and killing people. Not allowing people to even apply for asylum – people need to know this! I also wanted to take pictures at the action. I want to take pictures for the same reason. Pictures are truth, they are a way to spread the truth, and people relate to the images….I thought the action was good and I particularly liked the time at the trolley station with all those people from Mexico there. Many stopped to take pictures, to see and read the banner. The banner was amazing! For one reason: it was 100 feet long; and reason two: it was to the point of our mission. And, I liked it was in English and Spanish. Thank you to the people who funded it! We need more people like you to donate even more to drive out this regime. We need a lot of people and funds to keep this going, to help it grow, to get people across the country to get involved – figuratively a banner that stretches across the country. We need to get the word out and a spectacular banner can do that.”

“I went to send a message that fascism isn’t tolerated in the U.S. or California. We need to keep spreading that message. It’s as simple as that. We have to keep the motivation out there. I think we got a lot of attention and accomplished there are people protesting against fascism. People feel that they don’t have a voice. This was a voice for a lot of people that might be intimidated by the system. It just seemed like intimidation down at the border. You could feel people’s stress. Its in the air and obvious. The action gave people a voice; we were speaking for them. It was a strange thing to see people like that… intimidated, like if they show approval they’d be targeted. People did not reject us, there was support, but there was fear of doing so very openly. Actually many families were surprised and excited… but there was a lot of fear, even though it was clear the sentiment was ‘we don’t agree with Trump.’ To do something like this in the middle of the caravan crisis… its very significant that this message was out there.”

“This area is ground zero for immigrants. The more we do here at the border, the better, and we have to unite everybody across the country. Our goal is to remove Trump/Pence from office. Everyone matters, every contribution helps, everybody has their part to contribute. The 100 foot banner was cool, in your face, it got a lot of attention and it created a real visual impact. Thanks to people who supported it from across the country. We put their names on the banner… they were there with us. At the action I felt there was a lot of fear in the air. People scurrying real fast to where they need to go and not feeling they can speak freely. There is a sense of repression and political intimidation and the militarization of the border. People not able to hang out and speak. Its like ‘this is government property’ and the way it’s policed is with the threat of force. So its very significant this message impacted in the midst of this repressive situation by the U.S military and Homeland Security, and the support from around the country really matters.”

“The people that showed up were much appreciated… we need more people! The banner and action had a lot of impact on the people on the border. I’m an ethnographer. So, I pay attention to people’s reactions. I was noticing their reactions. This was a good place to to do this action. I’ve seen people at events elsewhere and people pass by – but this had a greater impact at the border. People at border go by the rules, so to see people fight. Well, I saw shock and people photo-graphing and video-graphing. People took pictures for a reason. They aren’t going to a video for nothing. They’ll do something with it on social media. There were at least a 100 people who took videos. It was really impactful, where this type of action doesn’t happen often. And it was a good day to do it, people shopping. It was a shock to them, real big impact. People are restrained at borders. It brings an abstract idea into reality even in a physical sense. Just the idea of the physical border itself. This was a place where the action had one of the greatest impacts I’ve seen. This was really good place to do it! You have to be in the right place at the right time. You got to go to the right place, especially because of what happened with the CS gas fired on the people in Mexico. We should organize with others to coordinate a nationwide action at the borders, simultaneous. Even if people can’t come to the action, people can contribute by giving funds.”

“‘Immigrants are welcome!’ That’s a personal message we need to send. And we sent it at the border… but we did more. Because people are going after symptoms but not the cause. There are other movements, like the women’s march, or climate change, and people come out to protest and then disappear and things get worse for women and the environment. Look at the lunatics on the Supreme Court that Trump rammed through, how that impacts women! So, whether immigrants, women, the environment or other issues, it’s ‘Trump/Pence Must Go!’ because Trump has a strategy and he’s ready to strike. We got to get people understanding that they need to be driven out by the people. We need to get people on the separate issues to see it’s bigger than that one issue, as important as those issues are, that the entire regime must go.”