The Founding Call to Action of Refuse Fascism began with the following assertion: The Trump/Pence Regime is a Fascist Regime. Not insult or exaggeration, this is what it is. For the future of humanity and the planet, we, the people, must drive this regime out. 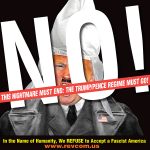 by Coco Das and Sarah Roark

Why should we unite in a mass protest movement to drive out the Trump/Pence regime, when the values they represent have always been a part of American society? – read more

Whether or not we understand the fascist aims of the Trump/Pence regime matters. It matters because it’s the truth, and without confronting the truth, we cannot confront the real stakes and what must be done to stop a catastrophe for humanity.

It is therefore very important that Jason Stanley’s book, How Fascism Works: The Politics of Us and Them, boldly implicates Donald Trump as part of a global rise in what he calls “fascist politics.” While Stanley makes a distinction between fascist politics and a fascist state and does not deal with the fascist state in this book, he makes clear the dangers of fascist politics.

The dangers of fascist politics come from the particular way in which it dehumanizes segments of the population. By excluding these groups, it limits the capacity for empathy among other citizens, leading to the justification of inhumane treatment, from repression of freedom, mass imprisonment, and expulsion to, in extreme cases, mass extermination. Genocides and campaigns of ethnic cleansing are regularly preceded by the kinds of political tactics described in this book.

Stanley has some crucial insights to offer anyone who is seriously trying to make sense of what the Trump/Pence regime represents. Here, I want to highlight three of his points.

1) The rise of the Trump/Pence regime parallels in many ways the rise of previous fascist regimes. Each chapter in Stanley’s book explores a different strategy that has been used to rising fascist movements, including calls to a mythic past, societal hierarchy, anti-intellectualism, unreality, patriarchy and sexual anxiety, and a sense of victimhood, among others. Stanley gives concrete examples of how Trump’s rhetoric and actions conform to these features. For example, Trump’s slogan “Make America Great Again” attempts to elevate a mythical narrative of past national glory:

If Trump recalled Lindbergh specifically with “America First,” the rest of his campaign also longed for some vague point in history—to “Make America Great Again.” But when, exactly, was America great, in the eyes of the Trump campaign? During the nineteenth century, when the United States enslaved its black population? During Jim Crow, when black Americans in the South were prevented from voting? A hint about the decade that was most salient to the Trump campaign emerges from a November 18, 2016, Hollywood Reporter interview with Steve Bannon, the then president-elect’s chief strategist, in which he remarks about the era to come that “it will be as exciting as the 1930s.” In short, the era when the United States had its most sympathy for fascism.

2) Fascist politics are rooted in the history of the United States, but they have risen to new heights in this era of declining empire. As opposed to the dominant obsession with Russian interference in the mainstream media, Stanley rightly argues that the basis for Trump’s ascension has been ever-present throughout U.S. history. All of these tactics have been previously used in the genocide of Native Americans, the enslavement and segregation of Black Americans for most of American history, the subjugation of women, and the exclusion of immigrants and refugees. Racial, sexual, and class hierarchies have always been enforced with brutality, and American laws have even inspired some of Nazi Germany’s laws stripping Jewish citizens of their rights.

Stanley goes on to make the important point that declining empires are particularly susceptible to a re-emergence and re-imagining of fascist politics. As the old unifying comforts of empire fall away, the society’s divisions and inequalities become starker and create a dangerous nostalgia among the dominant group(s) for lost power.

Empires in decline are particularly susceptible to fascist politics because of this sense of loss. It is in the very nature of empire to create a hierarchy; empires legitimize their colonial enterprises by a myth of their own exceptionalism. In the course of decline, the population is easily led to a sense of national humiliation that can be mobilized in fascist politics.

Stanley doesn’t clearly state this, but readers should confront what it means for the world that fascists have come to power in this empire, declining or not. With Trump, we have an American-style Hitler with Nukes, embracing rule by open terror and violence IN ORDER to maintain American empire at any cost, even at the cost of all humanity.

3) Fascist politics are on the rise throughout the world, most often through the normal electoral channels. Stanley discusses fascism in a global context, with examples from Russia, India, Hungary, Turkey, Poland, France, and other countries where fascists have either risen into the highest office of the land or have made substantial gains in the past few years. In all of these countries, fascists have gained legitimacy and risen to power through the normal electoral channels. This is a perennial feature of fascism:

Historically, fascist leaders have often come to power through democratic elections. But the commitment to freedom, such as the freedom inherent in the right to vote, tends to end with that victory.

This is important for people to confront and is one reason, among others, why reliance on the 2020 elections to somehow stop the fascism of the Trump/Pence Regime is a dangerous folly. Once in power, aided by the perceived legitimacy of elections, fascist leaders continue to use fascist politics to consolidate their hold over government and society. Consider the statement Michael Cohen made in his recent testimony: “Given my experience working for President Trump, I fear that if he loses the election in 2020 that there will never be a peaceful transition of power.”

While I have some differences with Stanley’s analysis, overall it is an important contribution to our understanding of what the world is facing at this historical moment. For a further understanding of the fascism of the Trump/Pence regime, its roots in the history of this country and why it has come to the fore at this time, there is an unparalleled resource in this talk by Bob Avakian, The Trump/Pence Regime Must Go! In the Name of Humanity, We Refuse to Accept a Fascist America: A Better World is Possible.

The gaping hole in How Fascism Works is that after sounding the alarm on the rise of fascist politics in the most powerful country in the world, Stanley does not follow through on the full implications of this or give us a meaningful way to act. It is left to us to ask ourselves: what are the stakes for humanity when the Trump/Pence regime, using all the tactics explained in this book, controls the government of the United States, and what should we do with the knowledge we have and the reality we are facing?

As we deepen our understanding, we must act together. Observation is not enough. Outrage is not enough. Without meaningful action, we show the world that we accept the fascism this regime is wielding like a giant hammer on immigrants, Black and Brown people, women, LGBT people, the people of Venezuela right now…group after group that is demonized, locked up, threatened, and killed.

If this is not what you want to show the world, then come to RefuseFascism.org and find out about the plan and strategy that can actually stop this fascist trajectory. Seriously engage with our Call to Action, which outlines the reasons we must act and challenges us to follow through, by mobilizing into a force of millions in “massive, sustained nonviolent protests in the streets of cities and towns across the country – protests that continue to day after day and don’t stop, creating the kind of political situation in which the demand that the Trump/Pence regime be removed from power is met.” Around the world, dangerous regimes have been forced out of power in this way. This would be difficult, but it is entirely possible as more and more people gain the knowledge and determination to rise to another level of resistance.

Join our discussions at protests and organizing meetings and on social media. Evaluate the ongoing analysis we have been putting out for more than two years. And if you are finding it harder and harder to make peace with the path the Trump/Pence regime is leading you on, help us break others out of their silence, normalization, and conciliation with a fascist nightmare.

To Jason Stanley and everyone who is seeking answers to the most important questions of our time, Refuse Fascism is here, actively organizing to unite millions in an unrelenting mass struggle that demands far and wide, “In the name of humanity, Trump and Pence must go!”  Let’s raise our sights together for a better world.