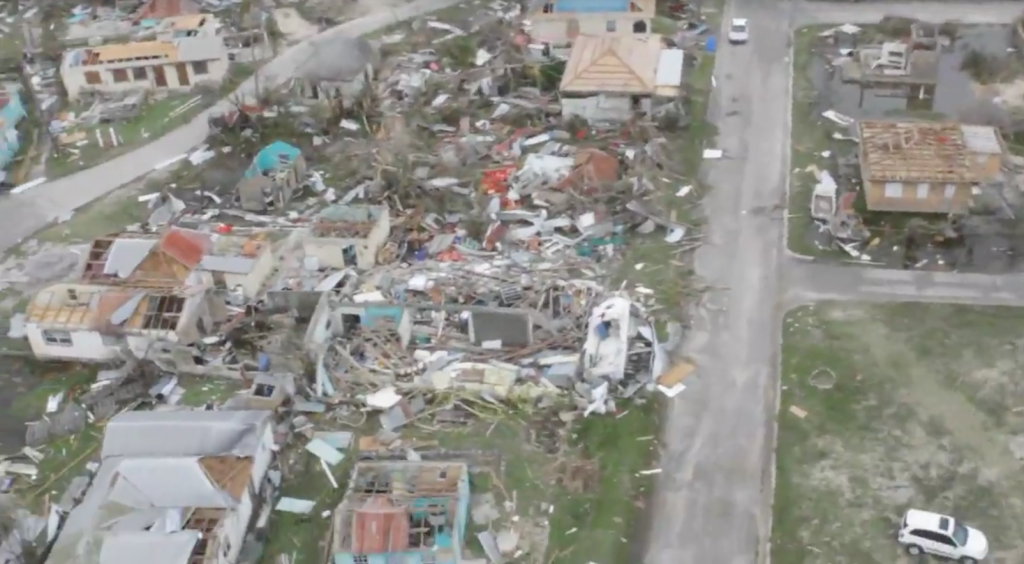 Look at pictures of the Bahamas after Hurricane Dorian and you see a landscape of utter devastation. Buildings smashed. Roads and fields flooded. People searching for missing family members. The official death toll stands at around 45, but as we saw with Puerto Rico after Hurricane Maria, the actual death toll and full scale of the destruction is not yet known. 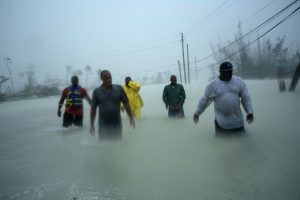 Dorian was the strongest hurricane on record to hit the Northern Bahamas, a Category 5 with wind speeds up to 220 miles per hour. While people in this country laughed at Trump saying he’d never heard of a Category 5 and changing the trajectory of the storm with a sharpie marker, people in the Bahama islands were fighting for their lives.

Without food, water, or power, hundreds of refugees sought passage to Florida. They were told they could travel with just a  passport and a copy of a police record, the normal documentation for passages out of Freeport based on a bilateral agreement on the books, but on one ship, more than 100 refugees without a U.S. visa were forced to disembark, reportedly because of a last-minute rule change from Customs and Border Patrol. Later,a CBP spokesman said, “They were not ordered off the boat by any U.S. government entity.”

Whatever led to the decision to kick desperate people off the ship, imagine the psychological torture of coming so close to escaping a place that has been made uninhabitable, and then having that possibility ripped out from under you.

Dorian will not be the last catastrophic hurricane. Exacerbated by climate change, these storms are getting stronger and more destructive, and they will create more climate refugees. This is an inevitability that the fascist regime in the White House is preparing for. In the same week that Dorian hit, the Trump regime proposed a policy to reduce refugee admissions to zero next year. You read that right. Zero.

Everywhere you look, the ruling parties are making calculations on their own behalf. $155M diverted from FEMA to build a border wall. $4.6 billion handed over by the Democrats to help the Trump/Pence regime carry out its ethnic cleansing of immigrants. Endless polls about the 2020 elections. Infinite debate on climate change while millions of people suffer.

It’s long past time to make our own calculations on behalf of humanity. Time to put 2 and 2 together and get 4; if we connect the dots the Trump/Pence fascist regime and its collaborators are laying out for us, we should be able to see what their equations lead to – a planet where millions of people are no longer able to survive – and understand that no one is coming to save us. Their calculations won’t allow it.

It’s up to us to calculate the relationship between what we do now and the future we are handing to the children of the world. Are we going to wait and gamble on the 2020 elections, or are we going to flood the streets and demand that the Trump/Pence regime on a collision course with humanity must go?

This should be an easy decision. Isn’t stopping a fascist America worth more than “the rules” that brought someone like Trump to power? His regime is hammering into place a 21st century fascist program of Manifest Destiny – “America First” – wrapped in the flag and Mike Pence’s Bible taken literally, with a program of white supremacy, misogyny, and xenophobia. We have more than two years of evidence for this, yet people who are not “doing the math” are still in denial about it.

On September 21st, Refuse Fascism contingents will join We the People marches in DC and satellite cities to raise the demand “Trump and Pence must go!” We support the Global Climate Strike from September 20-27th and the September 23rd calls for mass civil disobedience to #shutdownDC, because people do need to act like “our house is on fire.”

At the same time, we have to confront the truth of what Sarah Roark argued in her letter to Time Magazine and Robert Redford, that removing the Trump/Pence regime is a necessary step toward saving our planet. Everywhere people need to be discussing and preparing for the only way to stop this regime from cementing into place irreversible damage while putting up walls against people driven from their homes as a consequence. We must be gathering forces and getting ready to launch sustained, non-violent protests demanding Trump and Pence must go at the soonest possible time, learning from the people of Puerto Rico and Hong Kong on how to create the kind of political crisis this regime has not yet faced and won’t face without all of us acting outside of the normal channels. Refuse Fascism is in the process of calling meetings and inviting everyone with a heart to collaborate and strategize with us. This will not happen without you. Read and spread refusefascism.org, write to us, meet with us, join us, and be counted as one of many who can and must change the course of history.

RefuseFascism.org is a movement of people coming from diverse perspectives, united in our recognition that the Trump/Pence Regime poses a catastrophic danger to humanity and the planet, and that it is our responsibility to drive them from power through non-violent protests that grow every day until our demand is met. This Nightmare Must End: The Trump/Pence Regime Must Go!