In the third of five weeks of protests to launch the #OUTNOW Movement, determined cores of people took to the streets in protests across the country to raise the demand: The Trump/Pence Regime Must Go – NOW! From the howling rain and cold of Detroit streets to spirited marches that intersected with Dia De Los Muertos celebrations in Los Angeles and San Francisco, from a determined duo who protested outside Trump Hotel in DC to more than 100 boisterous protesters outside Trump’s appearance at Madison Square Garden in NYC, this movement has grown in its broad impact and deepened the understanding and commitment of those who have stepped forward. In Atlanta, two people drove up from southern Georgia to take part after seeing Cornel West speak about the movement on Don Lemon’s CNN show.

Everywhere, the response from people on the sidelines was overwhelmingly positive. Yet, we have not yet begun to set off the kind of chain reaction of growth which we are going to need to achieve to succeed. This is something we are all going to have to work on together, how to reach more of the people who are hungry for a way to act now – and how to move many more into seeing the need to join us in taking to the streets to demand: Trump/Pence #OUTNOW!

In piece that highlighted Trump’s visit to the UFC Mixed Martial Arts Fight in New York City, Spectrum News and NY1 ran beautiful pictures of the #OUTNOW protests while commenting: “RefuseFascism.org organized the protest as part of what they call their #OUTNOW campaign which is all about getting President Trump out of office now. Before coming to Madison Square Garden they travelled to Trump Tower, kicking things off at Union Square. They say that Americans need to act now, not to wait for the next election of the impeachment inquiry to move forward. They say Americans need to take a page out of the playbook from other nations who have fought to get unwanted elected officials out of power.” Video tweeted out by AP News Service have been seen over 160,000 times, other videos circulated very widely on social media, and coverage Trump’s appearance at the UFC Fight included mentions and pictures of RefuseFascism.org in CNN, NY Daily News, NY Post, and many more places. Tens of thousands watched livestreams of this protest on ACT.TV.

In many places, the protests were marked by the further forging and tempering of new members of the #OUTNOW Movement. People who have come back in Los Angeles every week since the first protest when it was attacked viciously by fascists. Several students from different colleges in NYC who have returned three weeks in a row succeeded in bringing a few more from their campuses this week for the first time.

A group of “Mamas” brought their kids to the protest and held together a sign that read, “ALL kids are OUR kids.” Several of them spoke to why they were there, emphasizing that they feel as responsible for the children who have been separated from parents at the border and locked in cages as they do for their own children. Speakers from Chile and Brazil connected the mass struggles in their countries to the fight they hope to see grow massively in the United States to drive out the Trump/Pence regime. And this week, Yusef Salaam, of the Exonerated 5 (formerly the Central Park 5), posted a powerful video (seen over 16K times) of himself in conversation with Carl Dix, calling for people to join in taking to the streets with the #OUTNOW Movement.

All this points to the real potential that exists for the #OUTNOW Movement and single unifying demand – The Trump/Pence Regime Must Go – NOW! – to unite people very broadly and bring forward the kind of society-wide resistance necessary to drive the regime from power.

Chicago talks to trump today! Proud to be part of #TrumpPenceOutNOW protest and march down Michigan. Next week we need more peeps so we can shut down the street like we did Monday! Thanks to the good folks at ⁦@RefuseFascismCH⁩ for hosting. ⁦ pic.twitter.com/3J547JZB4E

Yet, there are big challenges to confront. Thus far, the broad support these protests continue to inspire is far too passive – it matters that people cheer, honk, and gives a thumbs up when the protests march by or when they see footage on social media, but it is not even close to good enough. Trump and his regime is hammering ahead in implementing his fascist program – this past week, to give just one example, Trump announced plans for a military-style police “surge” against the inner cities in this country and green-lighted the release of $600 million worth of military surplus equipment to police departments around the country. All too many still feel that they can wait for 2020 or that somehow the impeachment process on its own will be enough to stop the nightmare being imposed by the Trump/Pence regime. It is imperative that this #OUTNOW Movement which holds such potential make significant leaps in the coming weeks — in further growing and tempering the forces of RefuseFascism.org that are at the core of initiating this #OUTNOW Movement and in setting off a dynamic through which many other forces from their own perspectives take up the #OUTNOW demand for the removal of the Trump/Pence regime as their own and in their own ways. As is spoken to in the piece, Join the #OUTNOW! Movement: “Achieving any demand for justice – for immigrants, women, LGBTQ, environment, against white supremacy, against unjust wars – requires driving out the regime.” Working for this movement to make these kinds of leaps is something everyone involved in this movement and everyone concerned about the future needs to work together to solve.

Off the sidewalks into the streets drive out the Trump regime! #OutNow
➡️ Join is to plan for next week #OutNow protest 2pm TOMORROW Customs House Coffee pic.twitter.com/f5JPwVsDSQ

We urge everyone to continue to take this movement out far and wide, spreading this Call for the launch of the #OUTNOW protests and to write in with their ideas and questions about how we make the next big advance in size and impact. We also urge everyone to tune in for this week’s #OUTNOW Wednesday Webinar – and to invite others very broadly to do the same – where we will dig into the Christian fascist elements of the Trump/Pence fascist program and wrestle together with how to make the next big advance. 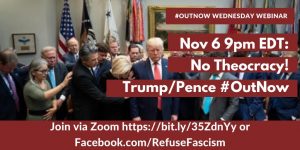 Write to [email protected] with your ideas, experiences, questions about how we make the next big advance in size and impact.