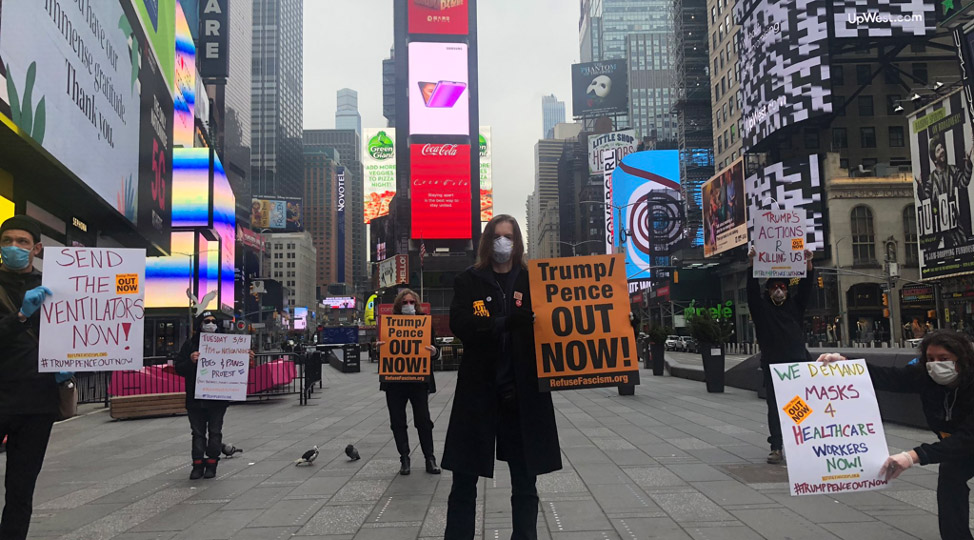 If you don’t know, now you know: the Trump administration poses an imminent threat to human life. That’s why RefuseFascism NYC activists today carried out a “striking visual demonstration” across Broadway and 7th Avenue in Times Square, as part of what they describe as an emergency social distancing protest dedicated to opposing this grave threat against humanity.

The RefuseFascism collective, a group of activists from across the country, has been working for years to fight against the looming threat of what they describe as a “regime that imperils humanity and the earth itself.” Even before the current pandemic outbreak, the group recognized the gravity and urgency of this threat. Their previous mission statement reads, in part:

For over three years, the Trump/Pence regime has brought an unrelenting barrage of insult, injury, and atrocity, with catastrophic consequences for all humanity. […] If we do not intervene now, we cannot ask how the German people accepted the horrors of the Nazi regime.

They knew of this threat early on, and knew what would happen if we did not act to stop it. That’s why RefuseFascism has been engaging in protests, mass mobilizations and other forms of direct action — to shed light on the Trump administration’s ongoing abuse of power, as well as encourage American citizens to stand up against it.

But now, in a time of global pandemic, the threat to human life posed by this administration has peaked. Corpses pile up at morgues in NYC, pushing their capacity so much that local authorities park refrigerated trucks outside in anticipation of an imminent overflow. In Iran,  funeral processions are held en masse as mourners gather to lament the loss not just of their friends and family, but of entire communities. And in China, cremated human remains are stacked end-to-end on pallets and shipped to funeral homes for distribution to the families of those who succumbed to the virus.