Only hours after it was announced that Homeland Security was deploying 150 federal agents to Chicago to restore fascist “law and order,” and 3 days after the CPD viciously attacked protesters with an Indigenous and Black Solidarity rally protesting at the Christopher Columbus statue, Refuse Fascism called for an emergency “Stand with Portland – No Fascist Police State” protest. The protest was co-sponsored by Revolution Club, Freedom First International, and Friends Who March and our demands included: Stop Police Violence Against Protesters in Chicago, Portland, and Everywhere! Trump Gestapo in Portland must be met with mass protest in the streets! Justice for Miracle Boyd! No Fascist Police State! NO ICE training programs for vigilantes! (this refers to a new “ICE Academy” in Chicago to train anti-immigrant vigilantes. We chanted, “No Trump-No Feds-No KKK! NO Fascist USA! Trump Pence Out NOW!”

The protest started with over 100 people rallying at the Federal Building and grew to close to 200 in the course of the march and rally. The urgent need to drive out the Trump Pence regime came out loud and clear and got significant media coverage. People coming to protest were met by a heavy and intimidating police presence. Before the rally began, DHS agents with a dog went through the plaza and later on unmarked cars with DHS agents were spotted on the street.

Speakers at the rally spoke about the rapid escalation of fascist thuggery and repression from the state in Portland and how this was an ominous dress rehearsal for Trump “retaking the cities.”  A crew of young Black who had organized a march a couple days earlier in honor of Elijah McClain, the young violinist from Colorado who was brutally killed by police came to the front of the rally. One said, “I read the news, I’m seeing federal agents, thugs, fascists, abducting and torturing American citizens violating their 1st and 4th Amendment rights. Fascism and racism are very intertwined. To attack this system that is the foundation of our country, we have to attack racism, fascism, and capitalism. It is our duty as a person who believes in freedom to speak out against these fascist pigs.”

Refuse Fascism speakers said, “When Trump talks about sending in the feds, we can see what he means by law and order – to defend white supremacy, Confederate generals… The invasion is coming… They are gearing up for martial law. We have to get out there in growing numbers… We have to draw on our courage and stand up to this federal police state …” Pointing to the courage of Portland protesters and the regime’s many crimes, RF said, “This nightmare must end, we have to be the catalyst, must drive out this regime. Don’t say if Trump won’t leave office in November THEN I’ll go to the streets. That’s Bullshit, the time is now. We can’t wait.”

Bishop Gregg Greer of Freedom First International said condemned the “Nazi Gestapo tactics against the people” … and said, “We will continue to stay in the streets and rise up against you… Everybody who is watching, don’t let it end today. NO JUSTICE, NO PEACE!” Speaker Mark Clemons is a victim of torture by the infamous CPD Commander John Burge when he was only 16-years old and spent decades in jail. He said, “What the police did Friday night at the Columbus statue sickened me. Watching Miracle Boyd get smashed in the mouth by police. NO MORE! Knowing prisoners died at Cook County Jail from Coronavirus, I say NO MORE! I say, Donald Trump NO MORE!” Later during the march Cassandra, wife of Nicholas Lee, spoke about the cruel death of her husband from COVID in Cook County Jail. “He was a human being. He deserves justice. I’m out here fighting everyday so this will never happen to another family.”

As the rally ended and the march tried to take the streets, Chicago police set up a barricade of bicycles and forced marchers onto the sidewalk. For two months police have allowed marches to take the streets, but not this one. Each time someone stepped off the curb, cops brutally pushed them back. One young Black woman was literally thrown back onto the sidewalk. But this crew of young women looked for any break in the police cordon and surged into Michigan Avenue, pulling the whole march with them. From then on, the streets belonged to the protesters. “Whose Streets? Our Streets!” and “Fuck 12! Fuck Trump! Basta Ya! Enough is Enough!” Later when the march got near Trump Tower, the authorities a bridge over the Chicago River denying access to the front of the despised building.

Other chants on the march included, “We Know Who You Serve and Protect, Get Your Knee Up Off Our Necks!” and “November is Too LATE! They’re Building Up a Police STATE! Trump/Pence Out NOW!”

At several points the march was organized into a huge single-file rectangle, with speakers and the 20-foot Trump/Pence #OutNow banner in the center. On a bridge crossing the Chicago River, with Trump Tower visible a block away, cheers went up when the protesters could see each other’s faces and signs. 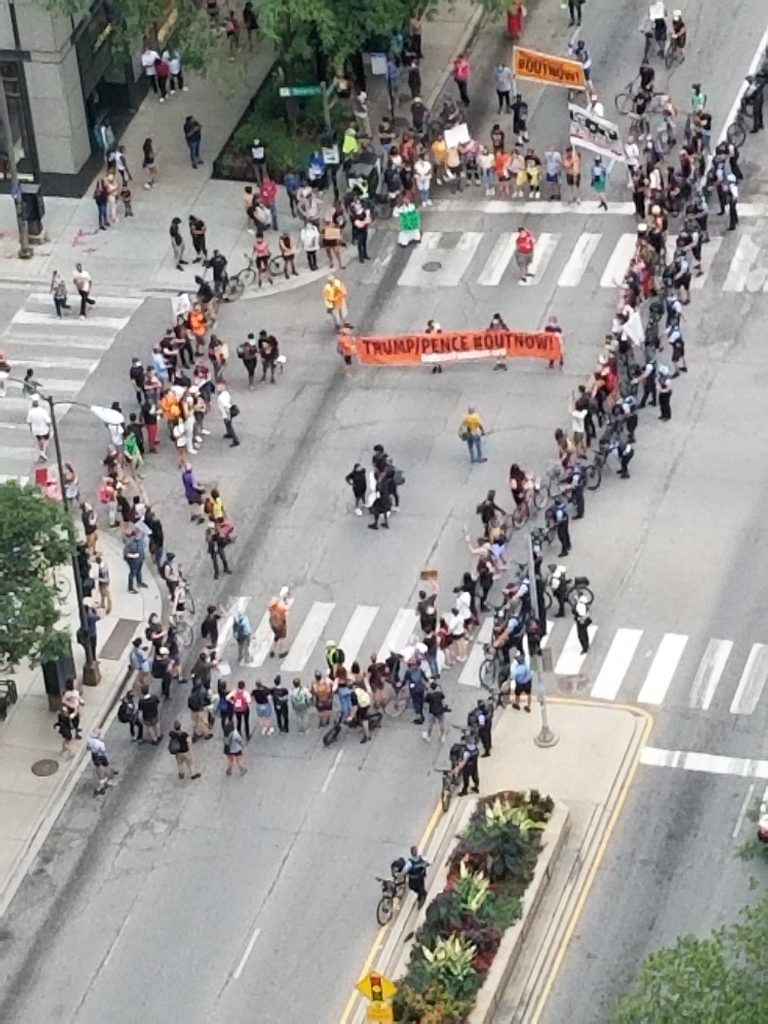