Find or host an action

NOVEMBER 4: 100s in Cities Across the U.S. Demand “Count Every Vote,” Refuse Fascism in the mix with OUT NOW!

The resistance as Trump moves to steal the election needs to go to a whole other level, but in cities across the country there were protests demanding count every vote, and Refuse Fascism was in the streets, in the mix and reaching out beyond the activists with the message TRUMP/PENCE OUT NOW because this is a FASCIST REGIME.

We have the power in the streets to change the conversation, to shake society awake, and actually DRIVE OUT this fascist Trump/Pence regime.

Washington, DC—About 50 activists with Extinction Rebellion DC, ShutDownDC, and Sunrise Movement DC marched in the streets the day after the election, chanting “Trump lies, democracy dies” and demanding that all the votes be counted. The protesters marched to Fox News and then the headquarters of the Republican National Committee (RNC).

Refuse Fascism was in the mix at protests and reached out into the community.

Trump is stealing the election.
The coup is underway.
So get out in these streets.
No Fascist U.S.A.#TrumpPenceOutNow #CountEveryVote @RefuseFascism pic.twitter.com/pX5JVPjakR

The streets of DC were waaaayyyy too quiet tonite, given that a fascist coup is currently unfolding.

But those who came out had heart. Listen to these three.

Protesters demand that “every vote be counted” at Independence Mall in Philadelphia, Nov. 4. 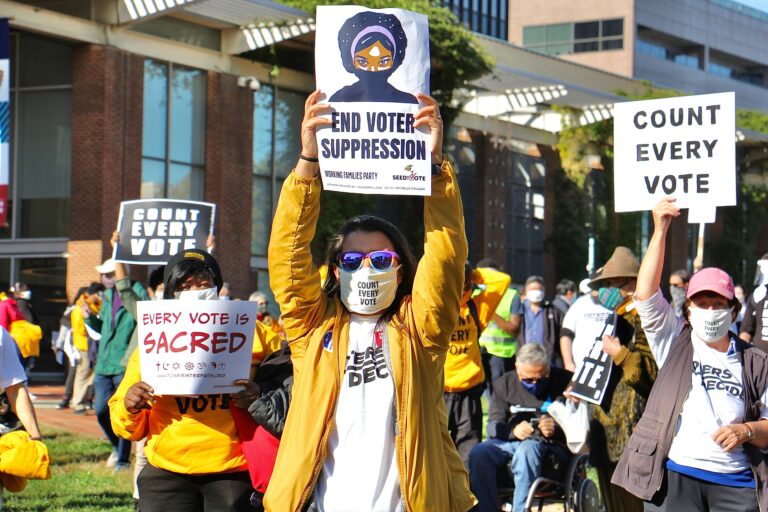 That’s right! Koyuki Yip with @RefuseFascism “We are here with the message: Trump/Pence Out Now! Fascism is NEVER legitimate
pic.twitter.com/dqd52wHGfc

Chicago
Hundreds of people marched through the downtown Loop area, chanting slogans like “Hey, hey, ho, ho—Donald Trump has got to go!” 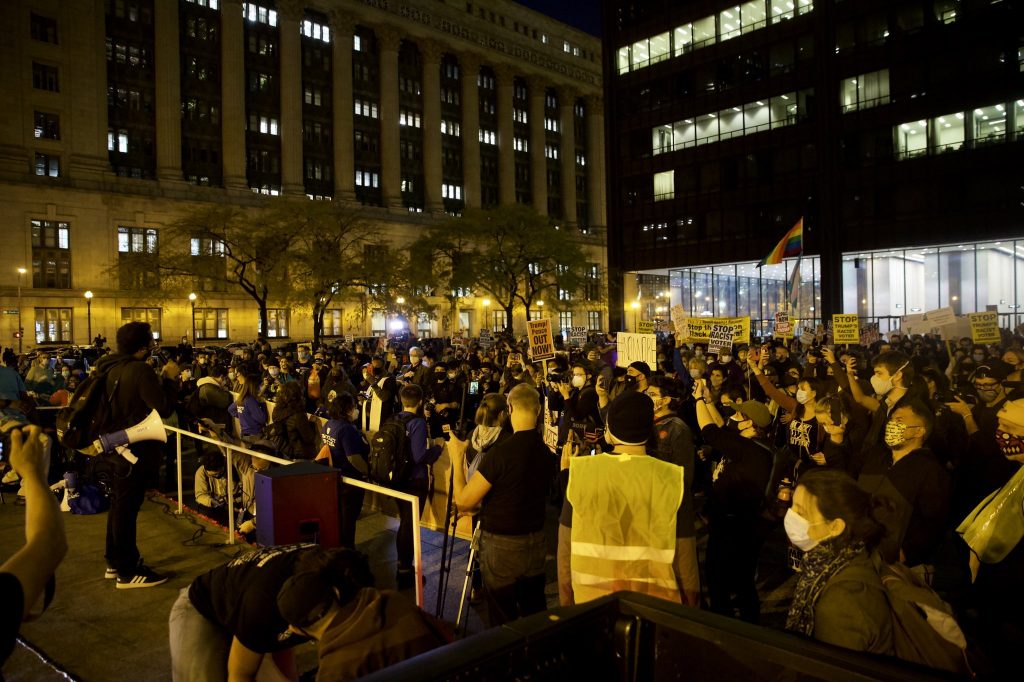 About 125 people came out to a rally called by the HTX Election Defenders coalition with the demand #CountEveryVote. It was organized by many of the progressive groups in Houston, youth, environmentalists, Democrats, RF, Womens March, and other activists. United by the demand to protect the election, different viewpoints were expressed, ranging from young people calling out the fascism of Trump, to the need to stay in the streets until Trump/Pence are gone by RF, to some people speaking to their confidence in the electoral process. Along with “Count Every Vote” and periodic “Trump/Pence Out Now” chants, one chant that set the tone was “the people are peaceful we know what to do, we’re rising together to stop this coup.”

Minneapolis–Hundreds of people marched through the streets, at one point shutting down traffic on the interstate I-94. They called for all votes in the presidential election to be counted, and also demanded end to murder by police and end to homelessness.

NOVEMBER 3: In the Streets protesting on Election Night – Refuse Fascism brings the demand: OUT NOW!

Sunsara Taylor leads people to Pledge to Resist at Black Lives Plaza in DC: “We refuse to accept a fascist America!”

Carl Dix at Independence Hall in Philadelpha:
Who is going to stop Trump? US in our Millions

In the Streets of LA

We are determined to continue to call people into the streets. White Supremacy, Theocracy, & Fascism is ALWAYS ILLEGITIMATE

Do not be deterred by theats of violence or low numbers in the streets- not acting in this moment will lead to far greater horrors.#TrumpPenceOutNow pic.twitter.com/ZkTHZ2SqVj

NYC is taking a pledge to overcome fear and uncertainty and struggle with everything to get ppl in the streets demanding Trump/Pence #OUTNOW !!! #Elections2020 #Election2020 #refusefascism pic.twitter.com/191mWhhjFS

NYC: Currently marching down 14th street! Now is a time to be in the streets – get with us! Union sq all night. #Election2020 #Elections2020 #refusefascism #fucktrump pic.twitter.com/BZOFXuuGcd

Watching the Election Night Livestream from Refuse Fascism in Chicago

In the Castro District, San Francisco 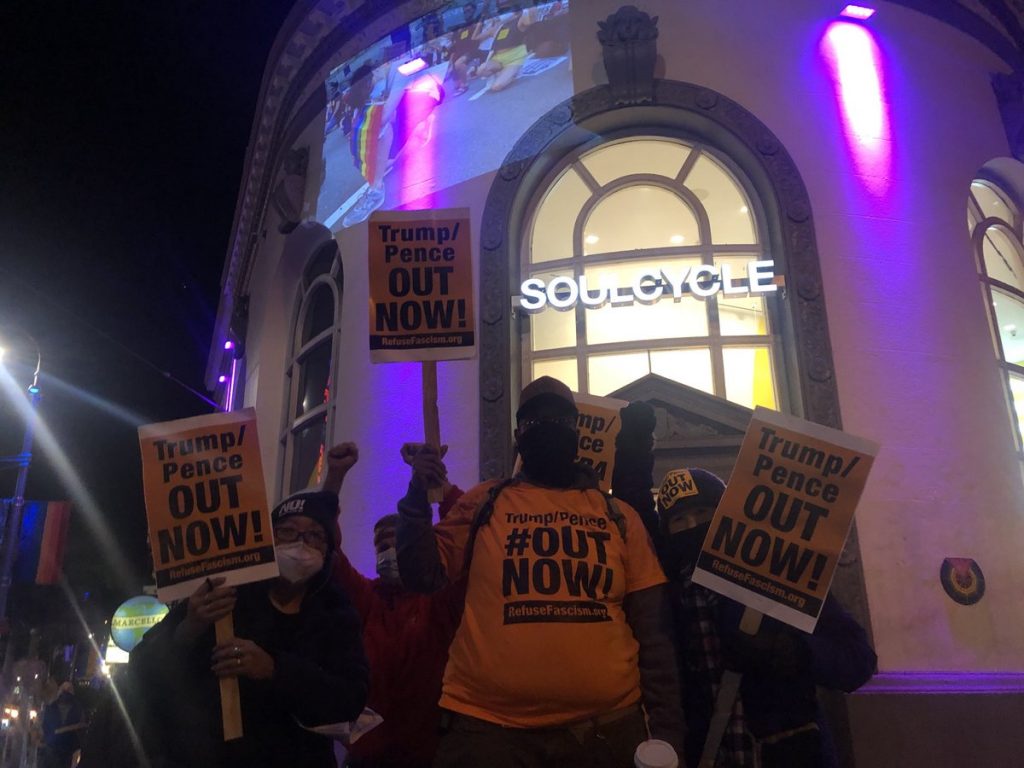 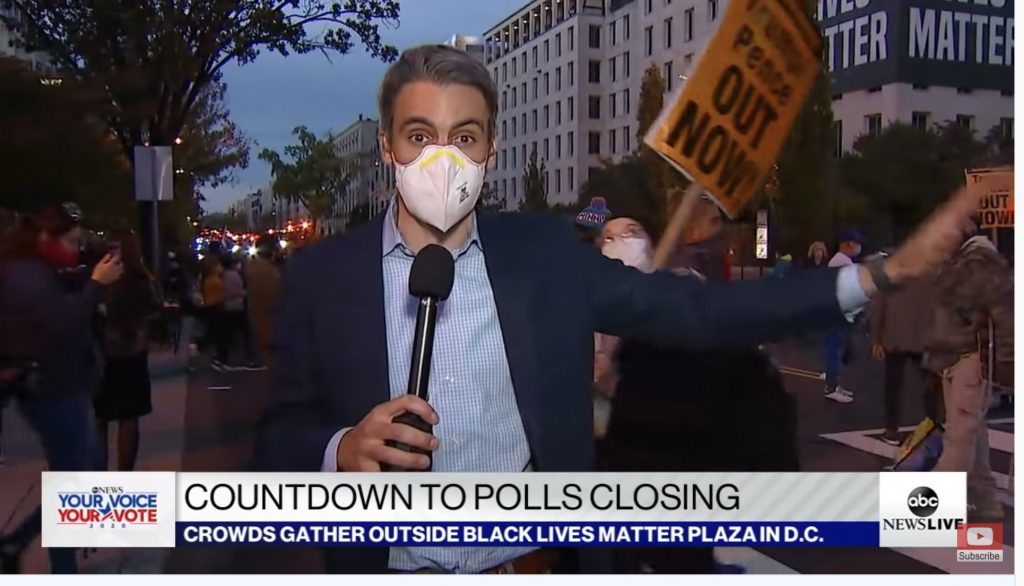 The OUT NOW! movement welcomes everyone who sees the great danger in allowing the Trump/Pence regime to remain in power.

See the RefuseFascism.org Call and Pledge for this movement.

Refuse Fascism co-initiator Carl Dix in Phllly calling for justice for Walter Wallace. “This has to stop …. it’s up to us to stop it…lets be clear votes by themselves will not be enough”. We must get out into the streets and drive Trump/Pence Out Now!
;

When YOU get in the streets with the message that Trump and Pence must go NOW, the message reverberates 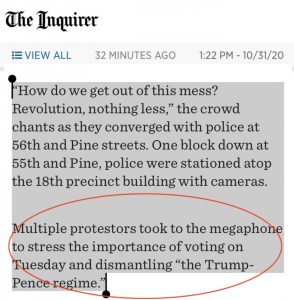 As this Spooky Halloween Parade to Stop a Spooky Future, made its way through NYCs East Village, Trick-or-Treaters joined & cheered chants of “Fuck Donald Trump”

The streets must fill w/ 10s of thousands chanting this & demanding the removal of this fascist regime! #Halloween pic.twitter.com/7plWldz450

Jamming out w @woodywoodstraw & folks against fascism at Pershing square in Los Angeles! YOUVE GOT TO MOVE! You’ve got to get up- and show out! #Refusefascism #Halloween join us tomorrow for Fuck Fascism Fest! & go to https://t.co/dVraDJtKe2 to organize to throw Trump out pic.twitter.com/Lxq553thB7 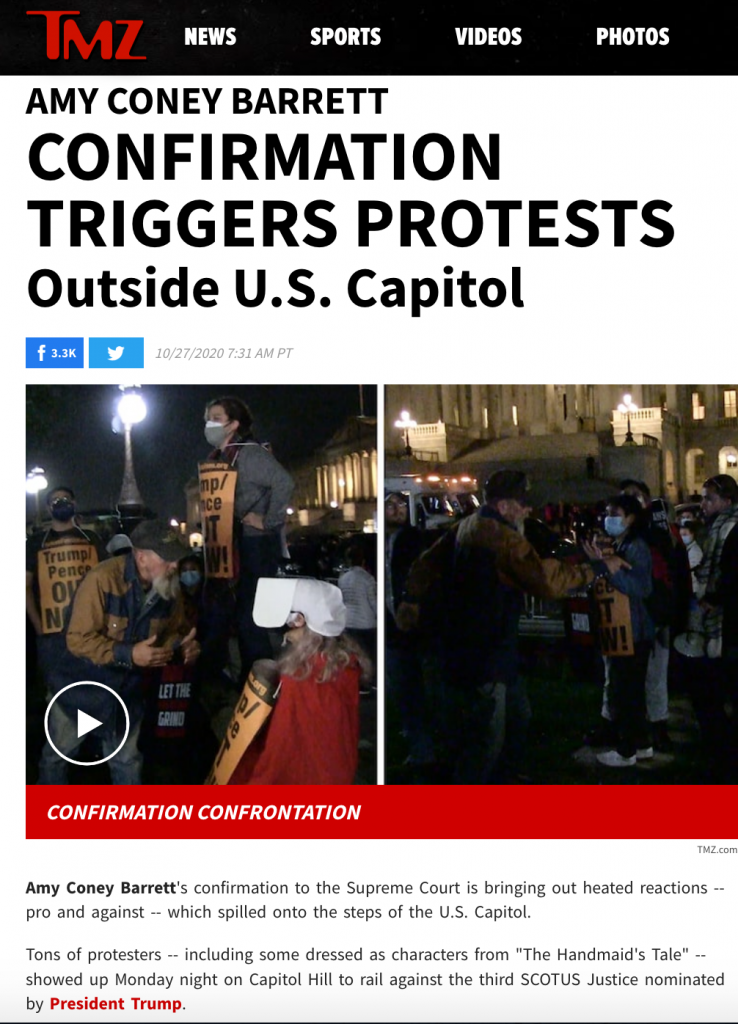 It is urgent that you come down to the Supreme Court right now.

Oppose the confirmation of Amy Coney Barrett, part of Trump’s election theft & give this the stamp of illegitimacy it deserves.

Outside now in front of #SCOTUS, hear from Handmaids:
“Trump is stealing the election, people aren’t paying attention. This is why we need to be in the streets.” #AmyConeyBarrett pic.twitter.com/M9NahssVgL

Humanity need you! Handmaids gathered outside of the new federal courthouse today in opposition of #ACB confirmation being pushed though by this fascist regime. Come out with refusefascism here in LA & all over the country to declare fascist theocracy illegitimate! # pic.twitter.com/NuDGzzlVpc

We must not normalize the shock after shock of inhumane atrocity this regime commits. We will be in the streets everyday until this regime is removed from power. Join us. The future of humanity depends on what you do right now #AmyCoatHangerBarrett pic.twitter.com/X9bpOV3RMb 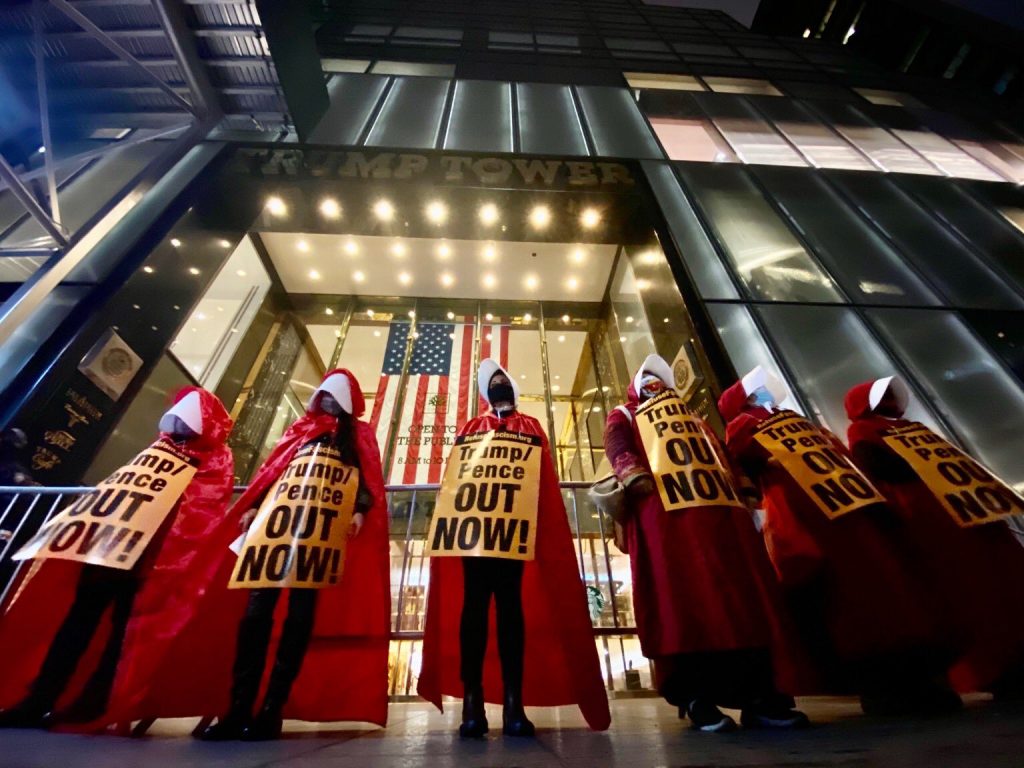 Refuse Fascism Chicago gets to Lake Shore Drive with the #Handmaids to to call out this #ScotusSham and demand Trump/Pence #OutNow ! #ChicagoProtest #abortionishealthcare #ClimateChange #ElectionInterference #BlackLivesMatter pic.twitter.com/dfrL32CulQ 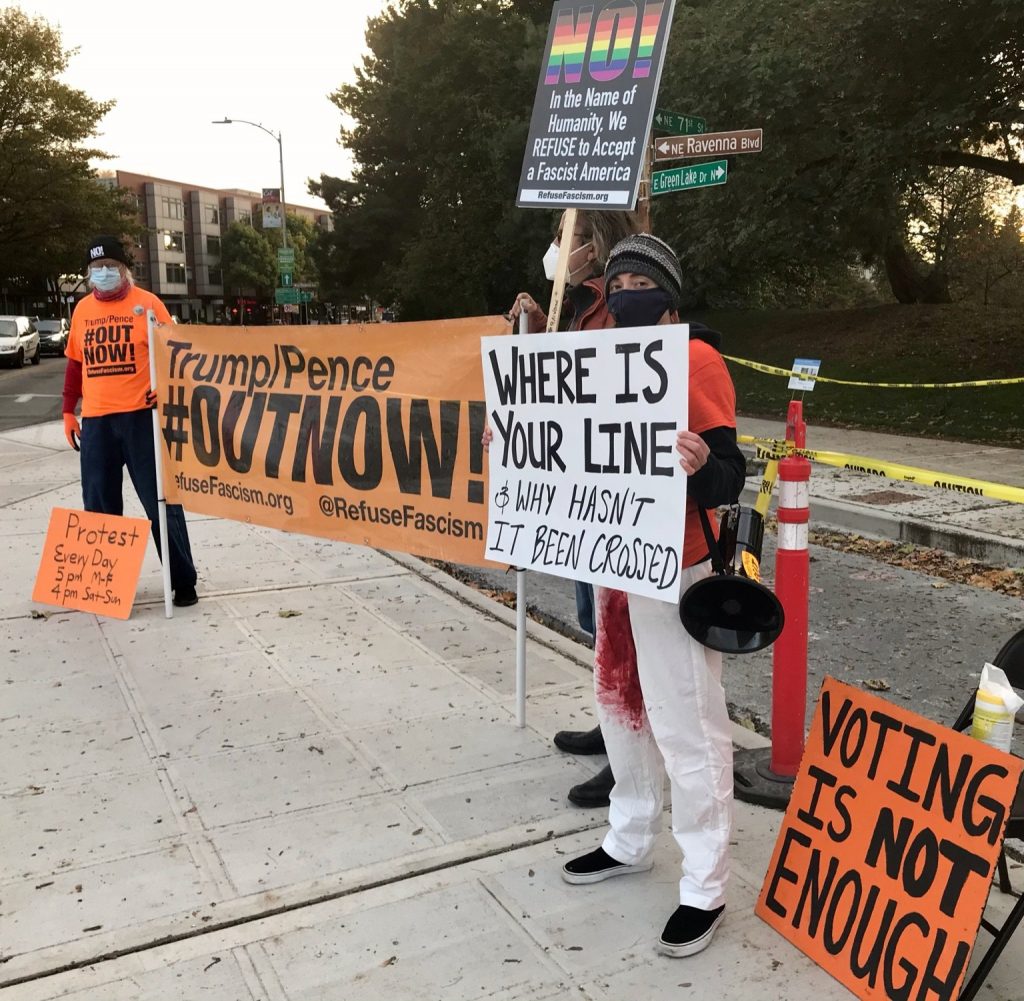 Trump Is Already Stealing the Election. TRUMP WILL NOT BE STOPPED JUST BY VOTING!

Transcript of his speech

They ran up on our protest in Black Lives Matter Plaza in DC. One was already wearing a “Take Down Trump” shirt. Another is a bug fan of Handmaid’s Tale, got chills when she saw us, and spoke movingly about her fear of Amy Coney Barrett on the Supreme Court. @RefuseFascism pic.twitter.com/sBLNG5LRJS

DC: Calling People to Join us Monday in front of the Supreme Court

The masses I’m #chicago dance to the sounds of Trump/Pence #outnow ! #trumpvirus

Laure Reichek, 90 year old survivor of the Nazi occupation of France during WW II, speaks to the “monster” now devouring the US.

545 Children Still Torn from their Parents by a Cold-Blooded Regime! 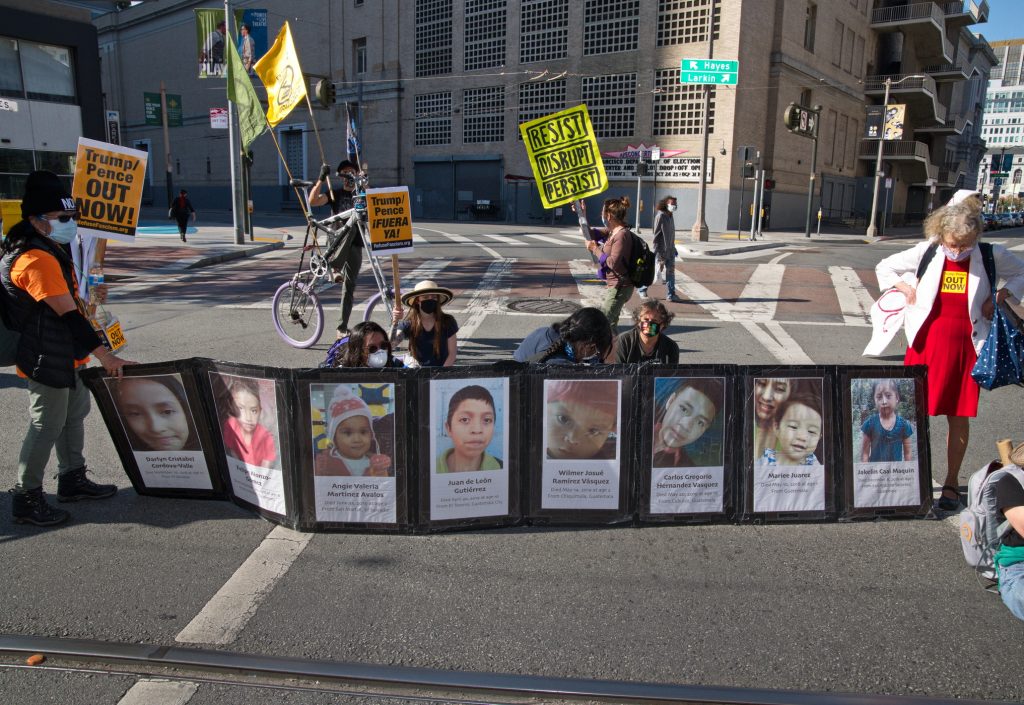 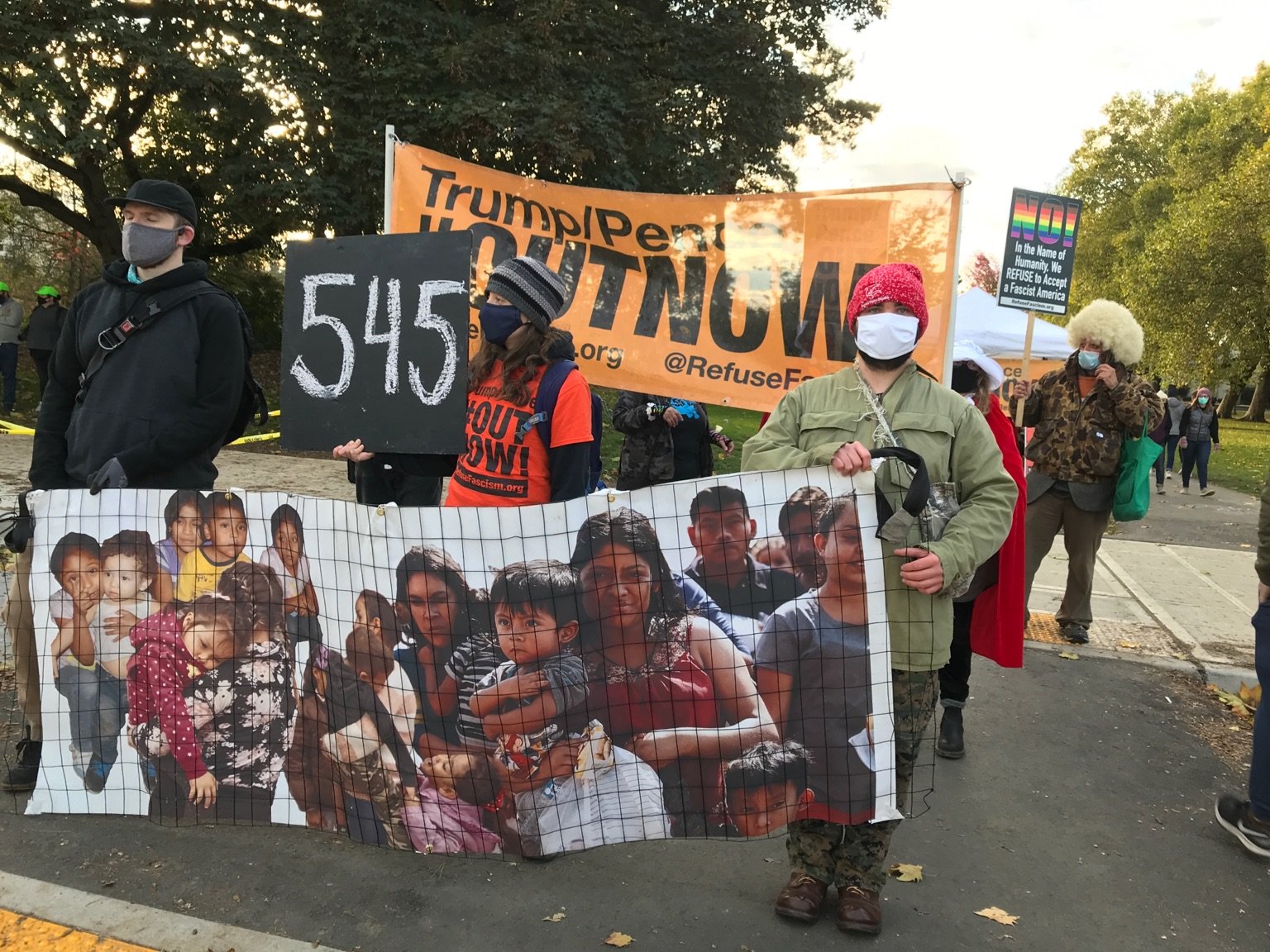 People join in to draw 545 figures in Cleveland – honoring 545 immigrant children, stolen from their parents by militarized agents at the US border, likely never to be able to find them again! Trump Is Already Stealing the Election.

545! 545! 545! 545 reasons alone this regime must go NOW! @SamanthaGoldm19 on the boundless cruelty of the Trump/Pence Regime. We cannot allow this genocidal racist Donald Trump a 2nd Term. Get in the streets! #TrumpPenceOutNow pic.twitter.com/nWxPP4jW9N

“We have the power….There have been more laws to go against police violence in the past several months than in the past generations because of you.” @RepRabb at the Trump/Pence OUT NOW Public Assembly on the power of people in the streets. #TrumpPenceOutNow #VoteEarlyDay pic.twitter.com/WAORi0CuH1

Lakota Song for the Movement

A Lakota person came up to the Refuse Fascism Chicago corner in #Pilsen to sing a song of good luck to the movement to drive out the fascist Trump/Pence regime! #ChicagoProtest #OutNow #IndigenousLivesMatter #lakota

Rittenhouse Square, Public Assembly to plan, organize, & protest to demand #TrumpPenceOutNow.
Song by .@ddlovato should be sung coast to coast as an anthem of resistance to the fascist Trump/Pence regime. We must not stop till they’re gone. pic.twitter.com/RCyqRu3oM2

Drummers setting the beat before the assembly in Chicago

‘Women are not property! Trump/Pence out now!’ — Women dressed up as handmaids protested Amy Coney Barrett’s nomination to the Supreme Court pic.twitter.com/dPKStH8cJn

This illegitimate confirmation is part of Trump’s election theft & imposing a fascist theocracy.

This is part of Trump’s fascist coup

In the name of humanity, we REFUSE to accept a fascist America! TRUMP/PENCE OUT NOW!
Trump is already stealing the election! We must vote. But Trump will not be stopped by our voting alone. Into the streets! https://t.co/l2I8h96H6y

In the Name of Humanity,
We Refuse To Accept A Fascist America.

Washington, DC looked like a dystopian world when protesters dressed in “Handmaid’s Tale” costumes gathered to demonstrate against the nomination of Judge Amy Coney Barrett to the Supreme Court. pic.twitter.com/soeTeBZu2e

“We refuse to accept a fascist America” — The Handmaids#WomensMarch2020 DC pic.twitter.com/24UhXhBPf3

NYC: Yes vote, but that is NOT enough. WE are the ones we have been waiting for. We have to be in the streets EVERY DAY, organize for mass rallies in the public square everywhere October 24

DC:Each of us needs to become organizers to get the millions back into the streets – JOIN US!

NYC: Pledging to stay in the streets until Trump/Pence are gone

Taking the pledge in DC

I’m here at Freedom Plaza in Washington DC where @womensmarch is holding their #CountOnUs march against Trump and #AmyConeyBarrett.@RefuseFascism leads claps and chants of “Trump / Pence out now!” dressed in Handmaid’s Tail costumes. pic.twitter.com/LnjyJJL9Bz

Hundreds in Los Angeles declare: I refuse to accept a fascist America! #TrumpPenceOutNow #WomensMarch meet us in Pershing square everyday! We must drive this regime from power! pic.twitter.com/AF3p96aBCU

Philly: What can you do when you take to the streets

Hundreds at #WomensMarch pledged to act on their conscience & use their power of nonviolent protests to oust Trump/Pence. @SamanthaGoldm19 @RefuseFascism pic.twitter.com/5Rny7z4FpV

Faces of the handmaids in DC

REACHING MILLIONS THRU THE MEDIA

Los Angeles: We will. not go back – Help plan and organize mass protests NOW

Hundreds in Los Angeles declare: I refuse to accept a fascist America! #TrumpPenceOutNow #WomensMarch meet us in Pershing square everyday! We must drive this regime from power! pic.twitter.com/AF3p96aBCU

SAY THIS W US: “Women are not incubators, Trump/Pence #OUTNOW ! “ #WomensMarch2020 #DC pic.twitter.com/fNDSaB8Far

Signs and voices of outrage at the March in DC

The Women’s March in Philly brought the #TrumpPenceOutNow banner to the front. As the fascists steamroll forward with their coup, this demand must and can unite millions before it’s too late.

Seattle: November is too late

No Fascist Police State
November is Too Late #TrumpPenceOutNow! pic.twitter.com/x2JECZPKt4 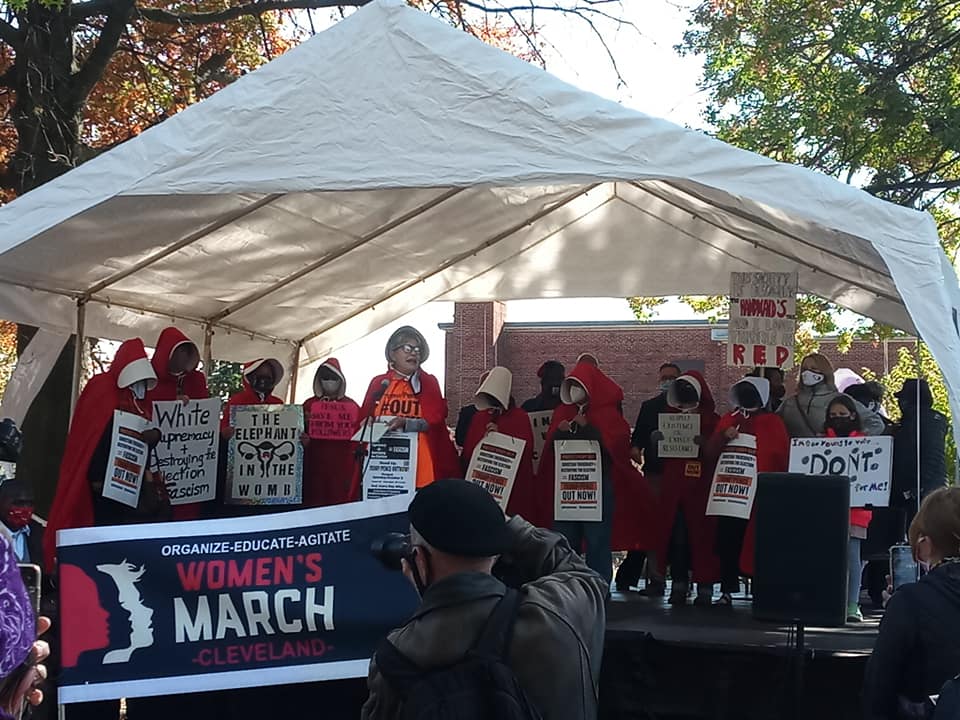 The Pledge, and inviting people to RefuseFascism.org to get involved

Honolulu News: “The message came through loud and clear: Trump-Pence out now”