In the early morning of March 8, a hacking attack caused the website of Refuse Fascism, refusefascism.org, to crash. For several hours, people were blocked from learning about, donating to, joining, and spreading the message: This Nightmare Must End! The Trump/Pence Regime Must Go! In the Name of Humanity, We REFUSE to Accept a Fascist America.

We are still investigating the source and nature of the attack on RefuseFascism.org but this much is known: at the same time the site was down, the Twitter feed of @Dark3liteSquad – which purports to be a hacker site – displayed a screenshot of the Refuse Fascism site down with the message “Candy from a Communist Baby” along with a threat to the Antifa movement.* The same account directly tweeted the RefuseFasicsm.org Twitter account (@RefuseFascism) a few minutes after the site went down with a message: “how’s your website doing?” And this Twitter account posted a screenshot of the Refuse Fascism website down with the message: “Don’t worry Mr.President D3S has your back !!!!!” 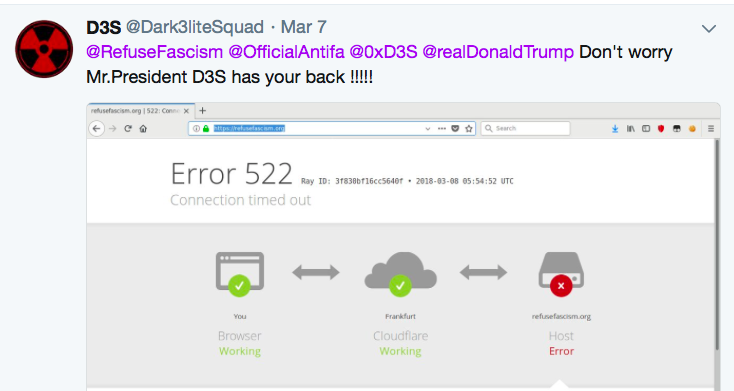 That these Trump-supporting trolls are taking “credit” for, or at least celebrating, the attack on our website, reveals them for the backwards intellectual cowards and bigoted bullies they are.  Just like the fascist Liar-In-Chief they support, they have no answer for the facts and argumentation on RefuseFascism.org’s website which exposes the horrendous crimes this regime is carrying out: Making America WHITE Again… moving to impose a real-life Handmaid’s Tale on women and LGBTQ people… devastating the environment while denying basic science and evidence-based thinking… America Uber Alles with the finger of Trump, a demented bully, on the nuclear button. So, instead of answering any of this with substance, they cowardly resort to hacking attacks to shut down, bully, suppress, and then taunt those who call out their crimes and are determined to act to stop them.

They should, however, be given some credit for their recognition that the message and mission of RefuseFascism.org – the message This Nightmare Must End! The Trump/Pence Regime Must Go! In the Name of Humanity, We REFUSE to Accept a Fascist America – is something that the retrograde MAGA crowd should politically fear.  RefuseFascism.org’s mission speaks to the reality, as well as the deep disgust and contempt people have for the genocidal ignoramus in the White House and his Dark Ages worshipping co-pilot, Mike Pence. Refuse Fascism is the organization confronting the full horrors of this regime and bringing to people a plan to really end this nightmare by driving out the whole fascist regime through sustained, mass nonviolent political protest. This is precisely what the fascist forces do not want people to know, precisely because it has the potential – and RefuseFascism.org has demonstrated the determination to persevere in realizing this potential – to transform the deep-seated hatred millions feel for this regime into a political force that can drive it from power.

So, let us take a lesson from these gutless grandstanding ghouls: there is a message of great import on RefuseFascism.org.  Everyone who hates the crimes being imposed on the people of this country and all around the world – and the even greater crimes being prepared by this regime if it is not stopped – needs to visit RefuseFascism.org and become part of this movement.  Not only that, people should donate generously to RefuseFascism.org – not only because it takes significant resources (time and financial) to thwart these attacks and restore the website, but because these attacks should inspire and compel us to amplify and project the voice of RefuseFascism.org to a far, far greater audience – through ads and other promotional efforts.

This isn’t the first time RefuseFascism.org has been singled out and targeted by self-proclaimed upholders of the Trump/Pence regime and all its crimes and horrors.

Last year, InfoWars and other fascist websites launched a massive campaign of lies, distortion, and intimidation to shut down nationwide protests on November 4. A mob frenzy was whipped up, and in that atmosphere, Refuse Fascism’s website was attacked several times and online only intermittently for several days.

Also, this latest attack on our website comes on the heels of other acts of repression by various forces aligned with the Trump/Pence regime including outrageous arrests of Refuse Fascism activists in LA, Chicago, and Washington, DC.

What’s even more important to understand is this: RefuseFascism.org has – at every point – refused to back down and has consistently responded to these attacks by not only restoring our website and politically and legally defending those wrongly targeted for state repression, but reaching out even more broadly to involve even more people in spreading and taking up this message and mission.  And we intend to do the exact same thing now.

If you oppose fascist bullying and suppression, you have a role to play…

* Fascist “news” media have a history of intentionally conflating Refuse Fascism’s call for non-violent but determined massive protest in the streets to drive out the Trump/Pence Regime in the interests of humanity, with the Antifa movement and with crude lies and distortions about the role of communists in Refuse Fascism. These lies and distortions have been propagated in parallel with serious threats of physical violence, including by armed fascists, along with the attacks on the RefuseFascism.org website. To set the record straight, see the Refuse Fascism statement on the Lies and Distortions by Fascist Web Sites & Trolls and the article quoting Refuse Fascism co-initiator Andy Zee in the Washington Post.