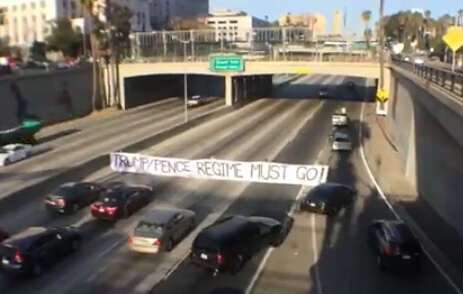 On trial for sounding the alarm against fascism

The Freeway9 and UCLA5 are members of Refuse Fascism and the Revolution Club facing criminal charges for protesting the fascist Trump/Pence regime, calling for massive, nonviolent, sustained protest to drive this regime from power.

The charges stem from:

– Two actions in the Fall of 2017 on the 101 Freeway in downtown Los Angeles unfurling banners facing oncoming traffic – demanding that the Trump/Pence Regime Must Go!  The footage from these actions can be seen here and here.

– A range of protest actions at UCLA, including a public challenge to Treasury Secretary Steve Mnuchin in the Spring of 2018.  Videos of this were viewed over 1.5 millions times, and the stories ran on CNN, Rolling Stone, the NY Times and more.  Watch them here and here.

* The freeway actions were responding to the Call from Refuse Fascism for national protests to begin on November 4, 2017: “We will gather in the streets and public squares of cities and towns across this country, at first many thousands declaring that this whole regime is illegitimate and that we will not stop until our single demand is met: This Nightmare Must End: the Trump/Pence Regime Must Go!  Our protest must grow day after day and night after night—thousands becoming hundreds of thousands, and then millions—determined to act to put a stop to the grave danger that the Trump/Pence Regime poses to the world by demanding that this whole regime be removed from power.”

With all the nightmares that the Trump/Pence regime have steamrolled ahead with since then, we would be in a much different – and potentially much more favorable – situation today if people had responded to this call the ways they needed to have.

* Continuing to sound the alarm about the extreme dangers in this regime, Refuse Fascism worked to call people in the streets to act commensurate with what we are facing.  Just days after the public challenge to Steve Mnuchin, members of the Revolution Club, including a UCLA student, were arrested waiting in line to get into a UCLA event with Chelsea Manning and charges were later brought for attending an on-campus national protest, 11 minutes of silence for 11 million undocumented, in which they along with over 50 students linked arms and they blocked UCLA’s Bruin Walk. They were charged for defying a 7 day ban from campus: an unconstitutional ban that was only given verbally, with no way to appeal.

* After almost a year after the freeway protests, in August 2018, City Attorney and Democratic Party politician Mike Feuer brought 57 misdemeanor charges against 11 defendants.

* Through the pre-trial discovery phase, it was learned that the Anti-Terrorist Division of the LAPD’s Major Crimes Division sent in a spy to infiltrate and record private conversations and meetings of Refuse Fascism at the Echo Park United Methodist Church.  The recordings and police reports based on all this involved distortions of what was actually happening, and included reporting on fundraising, outreach and campus organizing.  In addition, the Revolution Club at UCLA was being followed by UCPD who was stalking them and recording their constitutionally protected political activities – talking to students and distributing materials on campus with an hour by hour record.

* The first set of charges included conspiracy charges against two known leaders of Refuse Fascism in relation to the freeway protest, including one who wasn’t even on the freeway.  Conspiracy charges have historically been used to specifically target political leadership.  When the court ruled that the LAPD had to turn over more information about the infiltrator and their spying operation, these charges were dropped.

* One of the trials of the Freeway defendants has already taken place, ending in a hung jury with 9 calling for acquittal, recognizing that sounding the alarm against fascism is not a crime.  After a mistrial was declared, the prosecutor immediately announced he would re-try these defendants.  These misdemeanor charges, and ongoing political trials are a form of political persecution and prosecution of those who stepped outside the confines of ineffectual politics-as-usual, who called for a massive movement of millions from below.

In the trial itself, the prosecutor asked one of the defendants, Miguel “Alex” Antonio, why he did not just take part in things like the women’s march or voting.  He answered that he did take part in the women’s march and it was beautiful, but then everyone went home.  Fast forward to now, how many more horrors have been committed by this regime?  How much closer are we to the all-out consolidation of fascism.  What’s needed is a different kind of protest: one that relies on the people, in our millions, in the streets.

Through this trial, despite the clearly political nature of these charges, the prosecution worked overtime to argue these were just criminal proceedings, trying to prevent the politics from entering inside or outside the courtroom and working to ban any mention of the LAPD’s political surveillance.  But the whole way the investigation and trials have taken place shows how Refuse Fascism have been singled out because of their politics.

* Two weeks ago, in attempting to justify this unconstitutional spying, the LAPD Chief Moore went on the attack, engaging in lies, distortion and slander about Refuse Fascism.  He said that “members that identified themselves as being within this group had traveled to other parts of the country, and that in other parts of the country, there had been criminal acts including vandalism, assault with a deadly weapon or arson.”  In addition to the utter outrageousness of these claims, Moore’s comments intimate there may be a much bigger spying operation that began much earlier than stated in police reports that have been released thus far.

* This spying, surveillance and political harassment of Refuse Fascism is being targetted against the organization that has been singular in its recognition of the extreme dangers represented by the advancing consolidation of a fascist regime, and has been the only organization to put out a Call to Action that is commensurate with what is required to stop this: millions in the streets in sustained, non-violent, determined mass protest with one demand, “This Nightmare Must End! The Trump/Pence Regime Must Go!”