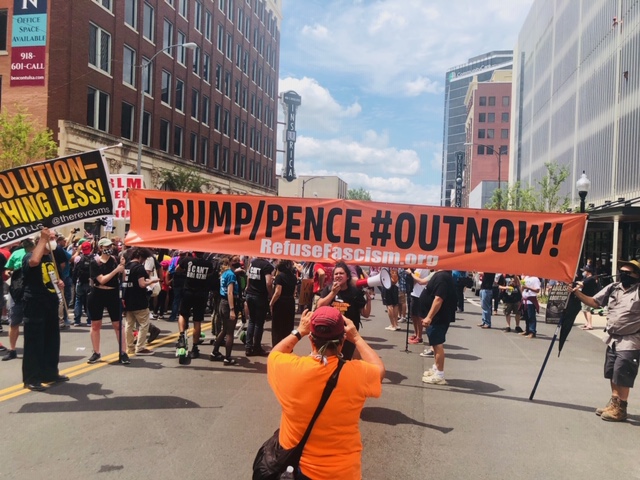 Juneteenth Weekend Refuse Fascism went  up to the gates of Trump’s fascist rally in Tulsa to say:

In the name of humanity, we refuse to accept a fascist America.

Ugly Trump Rally Met by A Beautiful Day in Tulsa: The Crossroads America Faces – The Trump/Pence Regime Must Go, NOW! 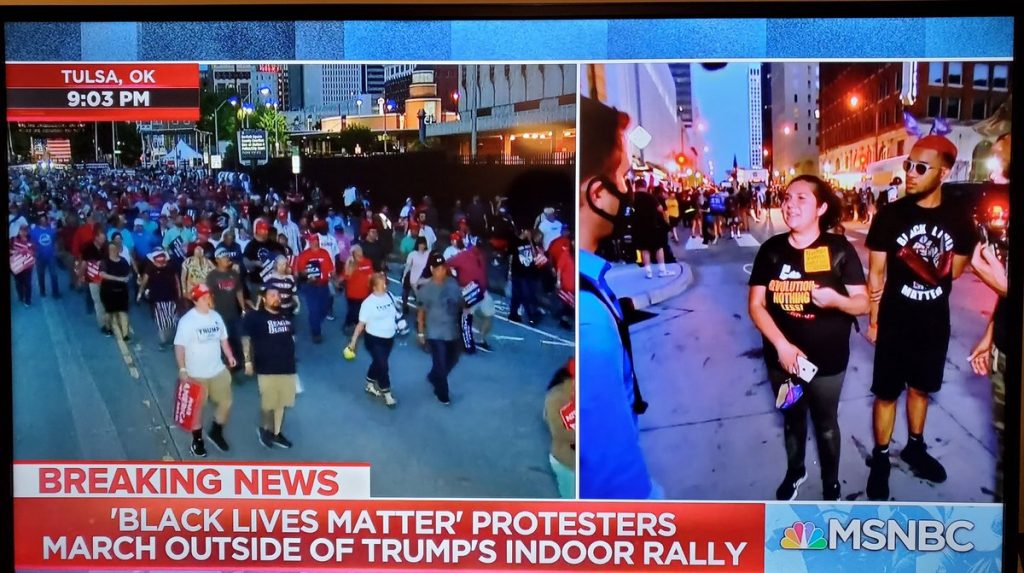 Yesterday in Tulsa was a beautiful day! People from all walks of life and different backgrounds, came into the streets to repudiate Trump’s white supremacist fascist America and his attempts to threaten protests & Black people.  Hope and an atmosphere of liberation filled the air, in stark contrast to the hundreds of racists camping out in Tulsa the night before. – Read more

“Trump is scared & his supporters are scared of the power of the people” says Emma of https://t.co/cVmiL2ZaE9 at #TrumpRally in Tulsa.
Goddamn Trump & his fascist regime! #TrumpPenceOutNow

In the wake of yesterday’s defiant anti-Trump protests in Tulsa and nationwide and Trump’s escalation of fascist, white supremacist threats at his Tulsa rally, RefuseFascism.org co-initiator and national spokesperson Andy Zee issued the following statement:

“We are at a serious crossroads. Trump is not just speaking the language of fascism, but in threatening in a tweet all those protesting his white supremacist rally in Tulsa on Juneteenth and in calling out the military in DC and threatening to do so nationally 10 days ago, he took an ominous step towards consolidating an American fascism – white supremacy, xenophobia and patriarchy wrapped in the Bible and the American flag. Should we fail to struggle now to demand the removal of the Trump/Pence regime, it could become too late. Waiting for Nov 3rd is folly and dangerous.”

This nightmare must end. The Trump/Pence regime must go! In the name of humanity, we refuse to accept a fascist America.

FROM NEWS COVERAGE OF TULSA

.@emmancipator with @RefuseFascism interviewed Live in Tulsa on @MSNBC tonight:
“We are calling for mass sustained non-violent protests to drive the Trump/Pence regime out of power.” #TrumpRallyFail
Support this movement https://t.co/cVmiL2ZaE9 pic.twitter.com/bSBj1EQXPE

The red MAGA hat is the modern day white hood of the KKK. In Tulsa thousands of white people burned Black Wall St to the ground. –@SunsaraTaylor

NYC marching from Union Square to Trump Tower to demand TRUMP/PENCE OUT NOW!

We oppose today’s KKKampaign Rally in Tulsa, OK and we are in these streets today to let the whole country know we aren’t stopping! #TulsaTrumpRally #TrumpPenceOutNow pic.twitter.com/UBhf4vEeLA

The monuments they cherish are monuments to slavery, oppression, genocide.That’s what this regime stands for & what they want to re-institute to “dominate the streets.” #TulsaRally

IN NYC & many other cities we pledged today refuse to accept a fascist America. #TrumpPenceOutNow pic.twitter.com/4CCQWI12cB

That smooth transition from
“No Trump, No KKK, No Fascist USA” to
“Hey Hey, Ho Ho, Donald Trump Has Got To Go”

NYC taking the streets to Trump Tower today to demand

No Murder of Black People By The Police

#LosAngeles Demand Trump/Pence #OutNow and Protest his KKKampaign rally in #Tulsa with @refusefascismLA at Hollywood & Vine- Get there! Rally starts at 3 march at 3:20 to get to Trumps star at 4! #TulsaTrumpRally #TrumpOut2020 #TrumpPenceOutNow pic.twitter.com/r5THL77x3o

A president who starts his campaign at the site of one of the a massacre of Black people and threatens violence against those who protest. Who calls out the military on peaceful protesters. A VP who can’t even say “Black Lives matter. Enough is enough! #TrumpPenceOutNow pic.twitter.com/Uwh87VUwNg