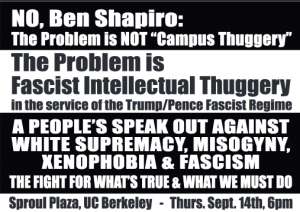 A PEOPLE’S SPEAK OUT AGAINST

THE FIGHT FOR WHAT’S TRUE &
WHAT WE MUST DO
Sproul Plaza, UC Berkeley Thursday Sept. 14th, 6pm

Watch Video from the Speak Out

Scenes from the People’s Speakout

The Call for the People’s Speakout:

Sproul Plaza is where students, faculty, and all concerned people should be on September 14 when Ben Shapiro speaks at 7pm on so-called “Campus Thuggery.” Shapiro is coming to campus to spread ugly fascist views dressed up in slick-talking “intellectual” garb. Beneath his “reasonable” tone lies Shapiro’s real thuggery: Shapiro mocked Trayvon Martin on what would have been his 21st birthday, insists that being transgender is a “mental illness,” compares abortion to the Holocaust and thinks women should be forced to bear children against their will, argues that racial discrimination is not a “continuing factor in American life” and that poverty among Black people is not a result of racism but of Black culture, believes in a “clash of civilizations” and calls Islamic civilization “the polar opposite of the West,” wrote that “Arabs like to bomb crap and live in open sewage,” and more. This is harmful! He, along with fascists of many stripes, have targeted Berkeley because reversing Berkeley’s radical history would be a major advance for the consolidation of fascism on campuses everywhere and throughout society.

Read “The Issue is Not Free Speech – the Issue is Fascism”, by Sunsara Taylor

Fascists must NOT have an audience. DON’T GO. Or if you do go, WALK OUT when Shapiro starts to speak, and come to the Speak Out.

No, Chancellor Christ, speech by fascists and those who intellectually defend them is not what humanity needs and will not contribute to campuses acting as centers of critical thought and debate. Fascism already has a platform – the biggest and most powerful platform in the world: the White House! Not only do Trump, Pence, Sessions, Kelly, and the rest of the Regime constantly put forward fascist ideas about Muslims, immigrants, women, LGBTQ, Black people, people around the world, and more… they are using the power of the state – and unleashing the extra-legal mob – to destroy countless lives and threaten humanity as a whole. 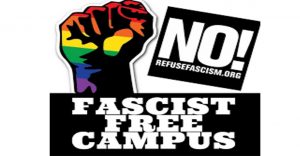 What this moment in history requires is resistance to fascism, including discussion and debate over what fascism is, its roots, where it can lead, and what needs to be done to stop it. And, people – especially students – joining in the fight to drive the fascist Trump/Pence Regime from power! Stand up on Sept 14 and start getting organized for November 4th, when many thousands will take to the streets in cities and towns across the country, day after day and night after night, growing to millions and refusing to leave until our demand is met: This Nightmare Must End: The Trump/Pence Regime Must Go!

Contact Refuse Fascism to endorse, to speak or perform, or bring your class or organization to participate. EVERYONE, from a diversity of perspectives, who refuses to accept a fascist America is invited!

Sunsara Taylor at Berkeley City Council, September 13, 2017
@SunsaraTaylor: The fascists targeting #Berkeley r ENEMIES of free speech & of Muslims, immigrants, women & the planet. WHICH SIDE ARE U ON?

There is NO moral “equivalence” between those seeking to impose white supremacy and fascism, and those fighting against this nightmare. 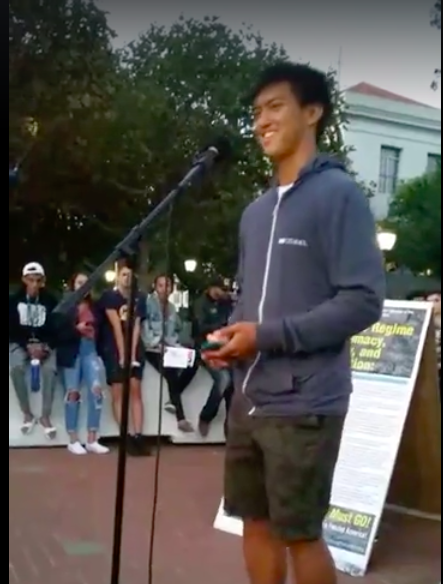