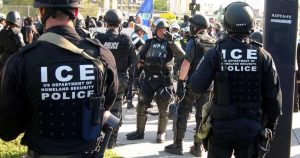 We will gather in the streets and public squares of cities and towns across this country, at first many thousands declaring that this whole regime is illegitimate and that we will not stop until our single demand is met:
This Nightmare Must End: the Trump/Pence Regime Must Go!

Our protest must grow day after day and night after night—thousands becoming hundreds of thousands, and then millions—determined to act to put a stop to the grave danger that the Trump/Pence Regime poses to the world by demanding that this whole regime be removed from power.

Even when some people agree that there is a need to protest each outrage and demand a different response from the government, they wonder if this demand, that an entire regime step down from power, is too extreme. It is not within the norms of how our system works.

I would like to offer a reflection on extremes.

500 people were arrested in ICE raids targeting and punishing sanctuary cities this week. This is extreme.

The island of Puerto Rico is facing apocalyptic conditions and the administration responded with blame and cruel indifference. This is extreme.

Women’s rights to abortion and birth control are being stripped away piece by piece. On fascist websites they talk about childless women having no worth in society and deserving to die. This is extreme.

At the UN, Donald Trump threatened to “totally destroy” North Korea, a country of 26 million people. This is extreme.

At a time when we should be seriously addressing the issue of climate change, so that the earth can continue to sustain life, our government is suppressing data, taking away environmental protections, and doubling down on the exploitation of fossil fuels. This is extreme.

Every branch of government has been taken over by fascists, and their base has been mobilized to enforce their ideology on the streets. White supremacists. Christian theocrats. Violent misogynists. They want to win. They want to encode their oppressive and hateful values into law. They are willing to share power only until they don’t have to anymore. At some point, long before 2020 or even 2018, it will be too late to stop them.

And all this has come about through the normal workings of our system. Donald Trump won the election through the electoral college. Women’s rights are being stripped away through the legislative channels. A defining feature of fascism is that it rises through the normal democratic systems, and then completely tears up the norms of that system.

The extremes we should be rejecting with every fiber of our being are the ones that are making life a nightmare for millions of people right now and promise to bring even more unprecedented misery.  When your house is on fire, you have to do things you would not normally do. You wouldn’t normally douse it with water, but that’s what is necessary if you want to put out the fire.

We are asking for everyone who is disgusted by what is happening to show up on November 4 and demand an end to this nightmare. It is not extreme to fight for a future for humanity. It is not extreme to insist that illegitimate rulers who have no interest in our future step down from power and get the hell out of the way. At one time, sitting at a lunch counter to fight Jim Crow segregation was considered extreme. Colonies demanding their independence was considered extreme. Demanding an end to the Vietnam War was considered extreme. We are calling for mass, non-violent protest that doesn’t stop until the Trump/Pence Regime is gone. They have done this in other countries. We can do it here.

This may not be what many of us expected we would ever have to do, but people are doing many things now they never expected they would have to do. Making arrangements for neighbors to take their children if they themselves are deported. Leaving their homes in a desperate search for food and water. Doing civil disobedience in order to save their healthcare – fighting for a right to live. Let’s not wait until we are forced to do things that are extreme beyond belief just to survive. Let’s not wait until protest is illegal and the electoral system is either skewed toward fascist victories or obsolete. Let’s do this, now, because it is the right thing to do and because the people of the world are counting on us.

On November 4, 2017, we will stand together with conviction and courage, overcoming fear and uncertainty, to insist that: This Nightmare Must End: The Trump/Pence Regime Must GO!

Endorse the Call for November 4