Things YOU Can Do
Send your  pictures, video, experience, questions, insights to [email protected]

created by the Bay Area chapter of Refuse Fascism

Bringing Refuse Fascism to a Palestinian demonstration in NYC

By a Refuse Fascism activist who took the message of Refuse Fascism into a protest against the U.S.-backed massacre of Palestinian people during the Land Day protests in Gaza

Meeting the Palestinian demonstrators yesterday was one of the most educational and heartening experiences I’ve had since becoming a volunteer for Refuse Fascism. The protest was in a Palestinian neighborhood but also people from different countries in the Middle East. 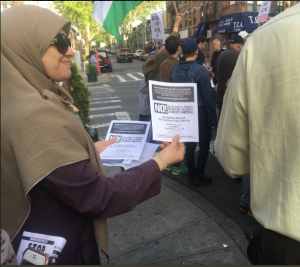 They greeted me and other members of Refuse Fascism with warmth and accepted our pamphlets with interest and enthusiasm. Putting aside the characteristic hospitality of Middle Eastern peoples, I believe these demonstrators were more receptive to our mission to take Trump, Pence, and the other fascists out of office than most middle class, white Americans because they are much more closely acquainted with tyranny, such as the Israeli occupation of Palestine, and outrages, such as the Israeli shooting down of youths, children, and women participating in a peaceful demonstration.

One of the organizers joined a conversation I was having with a woman and talked about our overall mission, in organizing all kinds of people in a networks to drive out the Trump/Pence regime, did she know of the ways that she could get this out to people in her community. – Read the whole story of connecting with people at this protest and invovling them in driving out the Trump/Pence regime.

Taking Out the Message, Organizing People, Raising Money at the March for Our Lives, Houston area, March 24, 2018

…In downtown, while politicians, teachers and students spoke about gun control, many of the protesters expressed a more general feeling of rage at the culture of violence in the U.S. and their concerns that something bigger is going on.  Several older people spoke about their fear of the U.S. embarking on nuclear strikes on North Korea, and the violence of the alt-right.  A couple of women talked about how Trump is surrounding himself with people who agree with him.  And a couple of other people talked how these people are hellbent on going to war.  Other people talked about domestic violence, and a few talked about the violence of the police.  A number of people said that there is something about the people in government today that is making everything worse than it has ever been.

…Many people said, of course the Trump/Pence regime has got to go, and a significant number of people said that they agree that the regime is fascist, but then, a lot of them had a hard time breaking out of their hopes that elections will save people. … A few others though, said that they know that it is up to us, the people, to stop them, but it seems daunting. .. A woman came up to us and said that she met RF a year ago and she has been thinking recently, that everything that was in the original Call has come true, and she thinks that now people are beginning to wake up to this.  All these people who we met have been invited to a RF chapter meeting tomorrow.

The Chicago chapter held two fundraising events in one weekend, Feb 2 to 4 and raised $1000 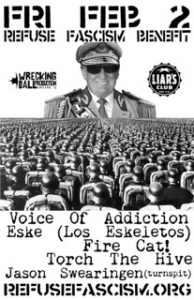 The first was a punk show on Friday night, Feb 2 at the Liars Club, a small well-known Chicago club. All in all, the message that there IS a movement to drive out these fascists got out in new circles on social media, and the crowd was almost all people who were new to RF.

The second event was a group outing to see a matinee performance of “We the People – an AntiTrump Musical” on Sunday, Feb. 4…. the success of both events was relying on people beyond our chapter or even our e-list. A few chapter organizers were critical but mainly we kept it all very simple and succeeded in spreading the name and message of Refuse Fascism while raising much needed funds.

On Black Friday a Refuse Fascism team of 8 went an intersection near the entrance to Hawai`i’s largest shopping center to leaflet and hold signs. We got out hundreds of leaflets (Click here for printable flyers (PDF of the Refuse Fascism leaflet we were passing out!). Many people stopped right there to read and respond.  Several groups of teens greeted us with “Fuck Donald Trump”; many people agonized about the need for people to “wake up and act”  and were challenged to check out the website and join the movement.  There were a lot of tourists from Australia and Canada who talked about how Trump’s policies are effecting the world (especially pointing to Trump’s attacks on the environment).

When one of those christian fascist street preachers with an insane sign and a loudspeaker showed up to condemn us to hell a courageous supporter in a wheelchair took out her whistle to counter his message. Then she pulled out a bright orange paper from the back of her wheelchair and scrawled “Nazi Scum”  with an arrow pointing his way, making it clear that he wasn’t with us.  This attracted even more attention to us; prompting another group of Jehovah’s Witness street preachers to apologize for his behavior and reassure us that religious people aren’t “filled with hate” and that she too was appalled by Trump’s “meanness”.

Creating a Scene at Black Friday in San Francisco

Black Friday, a Refuse Fascism crew with a bullhorn, a banner, three people wearing hazmat suits, and a small group flyering, collecting funds and names, took over a busy corner of Union Square in San Francisco – the heart of the city’s upscale shopping and hotel district, and staged a die-in.

At times there were half a dozen or more tourists, shoppers, and families passing by stopping to take pictures on their phones – no doubt many hundreds over the course of the 3 or so hours we were there. As people came to understand just what the scene was all about – the devastation that the Trump/Pence regime are wreaking and even more, will wreak if they are not drive from power, people threw in their own comments about how much they hated Trump – or in some cases, actually defended the orange monster and the regime. Some people actively joined in with Refuse Fascism’s protest – one young women put on a hazmat suit and lay on the ground, then her friends put in money so she could take the suit home. Several “took a knee” in honor of the NFL players and their on-going protest against police murder – and some promised to join in when Refuse Fascism goes to the Oakland Raiders game this Sunday to support running back Marshawn Lynch who is under fire from Trump for standing when the Mexican national anthem was played and sitting when the US national anthem was played.

Some key materials from Refuse Fascism in Google Docs format (easy to cut and paste into emails and social media):

HOW TO… Project the Message on Walls

From Some Methods We Need to Hold to Firmly and Deeply Instill in Everyone Working in the November 4th Movement:

Stay on message with our key slogans:

In the Name of Humanity, We REFUSE to Accept a Fascist America!
There are people all over the world whose lives are in danger from the Trump/Pence fascist regime who are counting on us. We are acting in the name of the humanity, not just for ourselves.

These slogans need to be known and taken up by more and more people from a diversity of perspectives—some who think this is already fascist and others who aren’t sure but want the nightmare to end now.

The Call to Action of Refuse Fascism and the New Call – This Nightmare Must End – provide analysis, direction and vision for how we must act. These should be constantly returned to for guidance and spread throughout society.