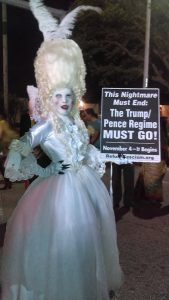 We went to a zombie festival street party. One person dressed up as a zombie, carrying a sign that read, this nightmare must end, the trump/pence regime must go. Nov 4th it begins. Ppl came up and said, yes this nightmare must end, and we told them, then you need to be part of making this happen-nov 4th.  As others got out cards and pamphlets, once again challenging people to get actively organize for going to austin for nov 4th. Where will you be nov 4th?

At one point, a Trump supporter complained about ‘protestors’ at the festival. A festival organizer and 3 police tried to get  us to stop getting out materials. After a brief confrontation, we called on ppl to take pictures with our zombie and sign and post on social media.  Throughout the evening ppl were posing and taking pictures to post.  A short time later, the head organizer came up to us and asked ‘what do you need from me’. We responded, get the cops to back off, which he did. This guy said that he remembers RF from the Warped tour and appreciate what we’re doing.
All day, over a thousand palmcards were distributed,  along with 40 pamphlets. And we raused some money with the papertowel game. Several ppl took materials to organize their friends for Nov 4, including from nearby cities.