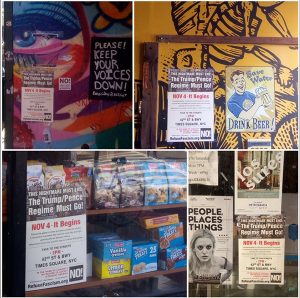 Our team of 2, plus another friend who joined midway, just finished a trip down a couple miles of a major street  in our city. We got almost 90 posters for November 4 out, mostly up, in stores, restaurants and street vendor carts. It was probably the most positive and heartfelt response we’ve gotten in a long time or ever. This area is a fast-gentrifying stretch that runs thru a large college campus, many small smoke shops, bodegas, wine shops, nail salons, laundries and restaurants which are being encroached on by chain stores in past 5-10 years.

About 75% of the non-chain stores put them up right away. (The chain store employees mostly wanted to, some eager, but couldn’t.)  There were 15-20 of the non-chain store managers said they had to talk to their boss before posting, but wanted the poster to make the argument. We also got out 400 new Refuse Fascism cards and about 300 flyers with promoting the new film by Bob Avakian (BA). We were out from 4:15 till 8:15.  On some blocks, 4-5 stores put the posters up, so there was the beginning of saturation.

We did not have long discussions, usually a couple minutes or less, enough for people to understand what November 4 is about (with material). This approach put the problem before people and in their hands, they were asked to decide on a matter that was already agonizing most of them, and to do something that could have consequences—positive and maybe negative.

We were, it seemed in almost every case, the first people to enlist them in doing something beyond complaining about Trump (which is part of the normalizing, wait and see atmosphere that’s been festering). The positive responses came from many immigrant shopkeepers or managers (Latino, Middle Eastern, etc), also Black people, and middle class white people who ran very upscale restaurants, markets and wine shops—some extremely excited to see us.  Repeatedly we’d stand in front of one of these cool places with spotless windows and think this will be a challenge, and then it was yes, put that poster up in the window!  In other cases, a mass discussion developed with enthusiastic customers which helped get some storekeepers off the fence.  We enlisted everyone in getting out the word. Some customers took posters to put up in their buildings, their bodega, one was going to post at the int’l hostel.

We individually (not in twos) walked into stores/restaurants, showed the  poster, read headline, said this is an emergency, we are going to stores up and down your street and they’re putting this in the front window.  We must drive out this fascist regime and here is the plan. Nov 4 It begins, ppl in cities and towns all over the country getting out in the streets, and staying in the streets day after day till we drive them out…” Many said yes before we got thru it all, some expressed strong support:
– “Yes, get this bastard out.”
–  “As soon as I saw it’s about getting out Trump, I’m with you, anything I can do to get him out, I will.”
– “Thank you for doing this, you’re really brave.”
– “Oh yes, put it right up front.”
– “I voted for Trump. I made a mistake. I thought he would help the small business, but he’s a very bad person. We have to get him out.”
– “I hate Trump, but it’s not just Trump, it’s all of them.”

If people agreed to poster in window, we taped it up and gave them a stack of 15-20 cards for the counter, and usually some leaflets with BA film (and explained what it was). We summed up that we needed much more material, especially more cards because 1) the storekeepers who were committed could use at least 50-100 cards at their counter and 2) we met a lot of customers while we were making our pitch who could have been drafted right on the spot to take 100 cards and get them out like we were doing, and on subway etc.  Not having the massive amount materials gave the opposite message (we’re doing it, you just come out Nov4, or spread on social media).  We couldn’t carry a lot more than we had today on our shoulders, but could have taken rolling cart of some kind, piled high. Even 2 people could manage this (leave cart on street when you dash into stores).

We found a lot of spontaneous hatred of Trump, not as much understanding of the Trump/Pence fascist regime, but people did relate to the comparison of Hitler with nukes.  No one took issue with “fascism.” The “struggle” was over whether we could stop them, but the very fact that something commensurate with that was showing up in their store helped change people’s thinking.

We recommend many more such outings, with more materials.  It has the potential to engage more people than mass flyering moving crowd at a subway stop for ex (tho I’m sure still important) and it put the effort in the hands of the shopkeepers and customers, with broader lasting impact as people begin to see the signs in stores – the dignity of this action in the public square so to speak (could maybe end up in blogs etc—we should publicize with pictures, I have many).

Two people can do these outings, and they can be brand new (better with 3). The moment is fertile – in one sandwich shop we stopped in, put up a poster, put cards on the tables and immediately a discussion erupted with everyone, one couple eagerly signed up to take posters/cards to their building and wanted go out with us on Sunday (we got a way to stay in touch with them).

Obviously hitting more areas is very important, but it would be worth taking cards/posters back through the stretch we covered to re-supply and see what happened to the posters.  Did they stay up? Etc.  I made a list of every shop that put one up, and/or took cards. Maybe one of our team can do this in next couple days.

PS we ran into exactly one person who was pro-Trump.