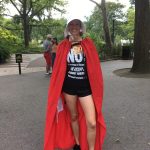 Voices from the protest

Why I Dressed Up as a Handmaid

Starting out dressed as “Handmaids” from the HULU series depicting a USA ruled by brutal Christian fundamentalist, women-enslaving theocrats… protesters confronted Mike Pence when he spoke today in NYC.And then… they threw those costumes to the ground and, together with others, pledged to drive out the fascist Trump/Pence regime in the name of humanity! The photos, video, and press coverage on this page gives a sense of how deeply this connected with pent up fury at the crimes of this regime.

Most of all, the significance of this protest and the one last week in Philadelphia, is that people dared to confront and act on the biggest lesson to be drawn from the Handmaid’s Tale as well as the history of fascism in the real world: fascism must be stopped—it must be driven from power—before it is too late. With fists raised, cloaks piled on the ground, and heads held high, these women chanted: This Nightmare Must End: The Trump/Pence Regime Must Go!
Spread this story! And join us!

Pence is a Christian fascist theocrat for whom the hellish world of the Handmaid’s Tale is a model society: women forced to bear children against their will, the Bible invoked to persecute LGBTQ people and tear immigrant children from their parents. Pence and Nielson are part of a FASCIST REGIME that is poised to do even worse – threatening war, even nuclear war, and destroying the environment for people the world over. 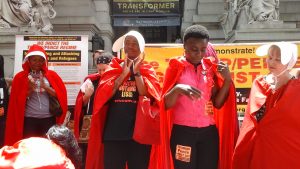 Nothing short of removing this whole illegitimate regime from power will stop this nightmare. People at the action pledged to do just that – not by relying on channels that Trump/Pence have made clear they have no respect for, but relying on the strength of people in the streets in non-violent but sustained determined protest to demand: This Nightmare Must End: The Trump/Pence Regime Must Go!

The lesson of the Handmaid’s Tale is that fascism must be stopped before it’s too late.  In the name of humanity, let us REFUSE to accept a fascist America.

This action broke into the media, and built on the tremendous protest organized by Refuse Fascism Philly last week, when 100 Handmaids confronted Mike Pence and powerfully demanded: Trump/Pence Must Go!

Dressed as handmaids in red capes and white face-obscuring bonnets, about 25 women demonstrated against the Trump administration in New York on Tuesday.  read article…

Lillian Forman, 82, was one of the handmaids who protested. She said she felt she couldn’t stay home.

“I see how America has changed since Trump’s presidency and how it will continue to keep changing if he has his policies fulfilled,” Forman said. “We’re losing our liberties, our law protections, and our balances.I saw what he did to the kids at the border, and if he can do that to little children — some of them mere babies, literally babies — he will do anything.”

Patricia Okoumou, who was arrested for climbing the Statue of Liberty in protest on July 4, also protested as a handmaid outside of the Alexander Hamilton Customs House. read article…

Led by the group “RefuseFacism.org”, which recently made headlines in Philadelphia for a similar rally, the handmaids donned red cloaks and white bonnets and kept their heads bowed as they marched to the Alexander Hamilton Customs House where Pence was expected to attend a Department of Homeland Security summit on cybersecurity.

“In the show, you can see the parallels. It’s fiction but it’s not too far off from the world that Mike Pence is trying to bring,” said Emma Kaplan, 31, a protestor from Brooklyn. read article…

“[The Trump-Pence administration] is a regime that’s shredding the rule of law and seeking to radically remake society, transforming the way this country is governed,” Samantha Goldman, one of the organizers, told Refinery29. “Fascism relies upon and foments xenophobia, misogyny, and white supremacy. You see the heart of the Christian fascist movement in this regime.” 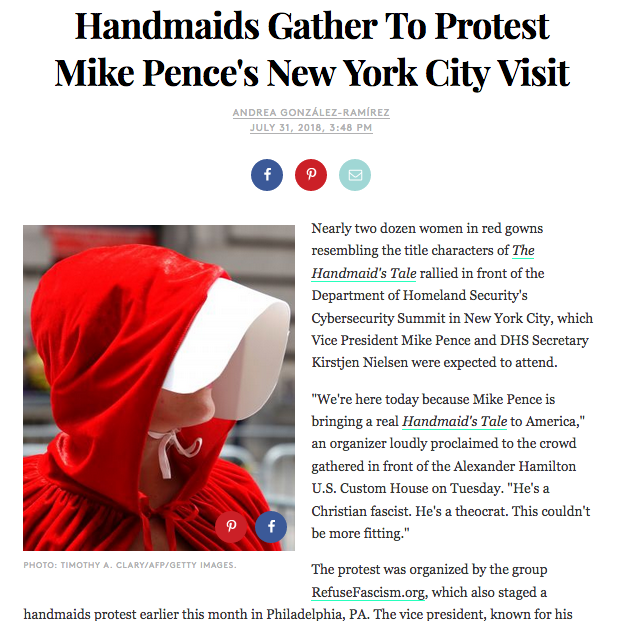 Read the article in Refinery 29

Voices from the Protest

We cannot rely on the normal processes such as voting and the courts to stop Trump/Pence. Because they have no respect for the institutions. But there is POWER in all of us. In the millions of women and men who are sickened by everything this regime represents. #TrumpPenceMustGo pic.twitter.com/QbJrv1c6k7

Patricia Okoumou, who was arrested for climbing the Statue of Liberty in protest on July 4, speaks – protesting Pence 7/31/18 pic.twitter.com/x3KNQCAg0O

Protester from Germany: I’ve been watching the news… it felt like a repetition of my high school history classes and that led to the Dachau Concentration Camp. We don’t want to go there again. pic.twitter.com/kfugoZdAZi

July 31 protesting Pence in NYC: Trump is a new generation neo-Nazi Hitler. How do you think Hitler came to power? It’s time: Trump and Pence Must Go! @RefuseFascism pic.twitter.com/wRqGeSqNjY