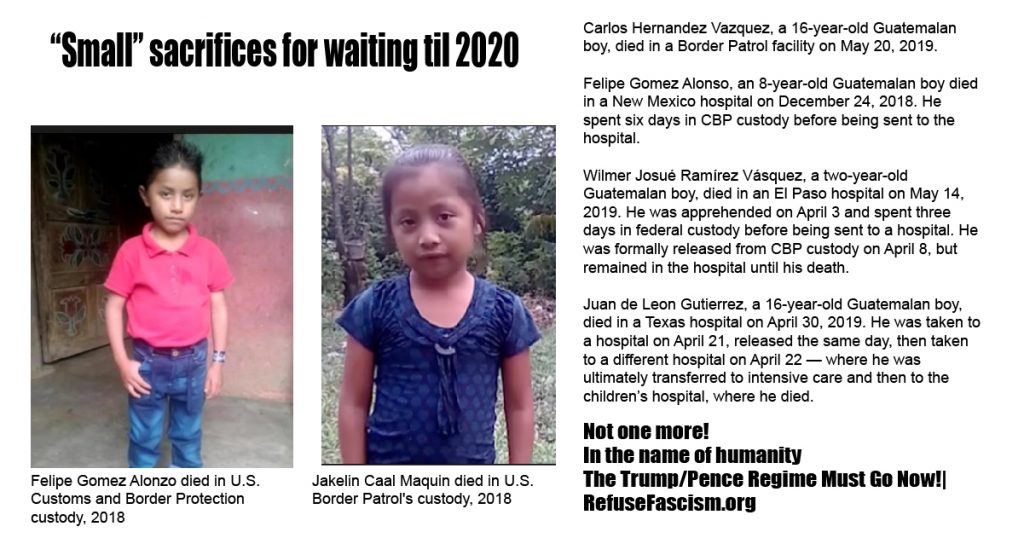 Trump/Pence Must Go: In the name of humanity, we refuse to accept a fascist America!

We don’t need more iron cladding. Facts are not what we lack. If anything, we have a confusing surplus of fact. Here’s a heresy for you: we don’t even need to know exactly what happened with Russia or the election to know that Trump needs to go right now!

Why? Because Trump has publicly committed crimes against humanity and national and international law. He does it often, and without apology. –  Read AN “IRONCLAD CASE” FOR WHAT?

Wilmer Josué Ramírez Vásquez, a two-year-old Guatemalan boy, died in an El Paso hospital on May 14, 2019. He was apprehended on April 3 and spent three days in federal custody before being sent to a hospital. He was formally released from CBP custody on April 8, but remained in the hospital until his death.

Carlos Hernandez Vazquez, a 16-year-old Guatemalan boy, died in a Border Patrol facility on May 20, 2019.

Also see: Horrific Abuse of Refugees at the Border Continues to Mount