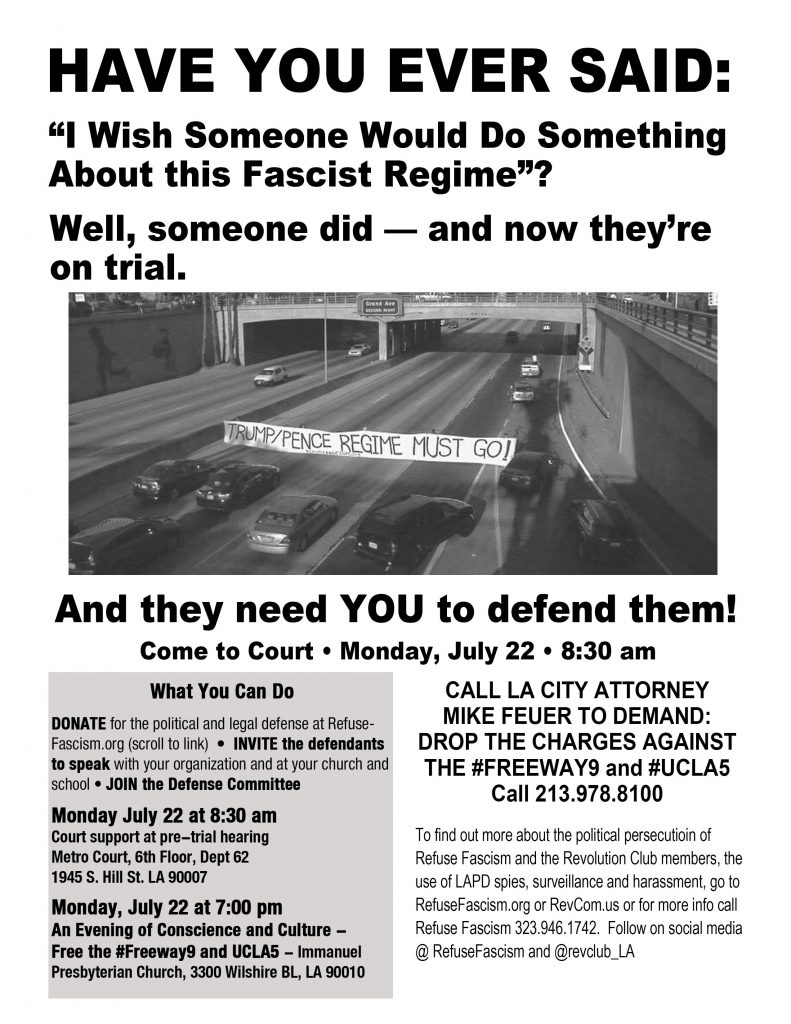 Victory In Illegitimate Trial of Two Arrested for Sounding the Alarm Against Fascism
Prosecutor Is Doubling Down on Political Persecution, Hearing On Monday July 1
What: Hearing on retrial
When: 1:30 pm Monday July 1
Where: LA Metro Courthouse 1945 S. Hill Street 6th floor Dept 62
PRESS CONFERENCE by defendants to precede hearing at 12:30 pm
in front of Metro Courthouse.

Documents on illegal LAPD (Anti-Terrorism Division) confidential informant received in discovery and the Motion to ban protest are available on request.

A mistrial was declared in the trial against two members of Refuse Fascism and the Revolution Club for protesting on the 101 Freeway in September and November 2017 to sound the alarm against the Trump/Pence Fascist regime. They called on millions to join a movement initiated by RefuseFascism.org to drive this regime from power and are charged with a total of 12 misdemeanors with up to 3 years in jail and $2,000 in fines.

That the jury was unable to reach a unanimous verdict reveals the righteousness of the defense and of the actions of standing up against fascism, which is not a crime!

Despite this mistrial, the prosecutor said immediately that they would retry this unjust case. A hearing on this is set for Monday July 1, 1:30 pm, LA Metropolitan Court House, 1945 South Hill Street, 6th Floor, Department 62. The defendants will hold a press conference and rally at 12:30 pm on the courthouse steps. All who feel the need to act to STOP this fascist regime need to stand in support.

The way the LAPD and City Attorney charged and prosecuted this case reveals this is a highly political persecution – aimed at criminalizing protest that steps outside the bounds of meaningless protest-as-usual, in the face of a rapidly consolidating fascist regime. When the Trump regime is caging thousands of migrant children in concentration camps with the Democrats funding this ethnic cleansing; when the last abortion clinics in several states are closing with the basic right to abortion under threat; the tripwires for war with Iran are being laid; and as the Supreme Court rules that states have the right to suppress their voters… a protest staged by members of RefuseFascism.org and the Revolution Club that shut down the 101 freeway in Los Angeles with a 50 ft banner with the slogan “The Trump/Pence Regime Must Go!” in the Fall of 2017 is STILL being aggressively prosecuted by the City Attorney’s office headed by long time Democratic politician Mike Feuer.

The prosecution has claimed this a simple traffic case, but they have filed motion after motion preventing the truth from coming into the courtroom about how these charges were put together in the first place. That LAPD’s Anti-Terrorist Division took over this case and decided the charges on a very political basis and that they sent a Confidential Informant into meetings of Refuse Fascism, secretly recording discussion and political meetings.

Yesterday, the prosecutor filed an extraordinary and outrageous motion trying to pressure the judge to silence the defendants and their supporters from raising any political discussion in the courthouse and even outside the courthouse on public streets. They tried to ban “any message regarding issues raised in this trial, including, but not limited to, Donald Trump, immigration, fascism, social injustices, et cetera.” They even raised objections, after the fact, about the politics in the testimony of the defendants about why they were compelled to step onto the freeway to stop business as usual.

The prosecution demanded that the judge interrogate the jury in the middle of jury deliberations. This would be tantamount to jury tampering by the prosecution. The judge did not go along with this, but the fact that the City Attorney tried to go to such lengths to shut down the political questions at the heart of this case shows that this case is about restricting the rights of people to bring out the truth of the extreme danger we are facing with this fascist regime. This would set a dangerous precedent for these defendants and for any other political trials.

When asked about this, Miguel “Alex” Herandez, one of the two defendants now on trial, said in a statement: “They have suppressed very important information from the jury. The fact that a spy from the LAPD’s Major Crimes Division was sent to public Refuse Fascism meetings to secretly record entire meetings and conversations with people (including a conversation with me) and ‘gather intelligence.’ Why are they trying so hard to suppress this information?”

In calling for the jury to do the right thing Mr. Alimouri said “In effect, history is the true measurement here. Will history look upon your decision favorably? Or will your children, will your grandchildren, will your great-grandchildren, look back and ask what happened? Or will they be proud and honored to see that you were on the right side of history? That you stood for something? What will history books say about you?”

That is the question before everyone right now: will people act commensurate with the crimes against humanity being waged by this regime. Michelle Xai, one of the #Freeway9 who was originally charged with conspiracy (charges which the City was forced to drop) said: “When Fascism is becoming law, we have the responsibility to act, in our millions, to stop this. The defendants were calling on those millions to act and those millions are needed now. Don’t tell me that it can’t happen in this country, that we can’t drive out a regime. It is happening in Sudan, Algeria, South Korea and right now in Hong Kong. This is the only way to get off the defensive and bring a stop to this Fascist Regime.”

* From the prosecutor’s brief: “Over the People’s objections, Judge Espinoza allowed the defense, in direct examination of the defendants and their closing, to identify a number of political woes that motivated the defendants’ actions on the day they were arrested. These included such inflammatory, irrelevant, and prejudicial topics associated with the current Presidential administration, including, but not limited to, ‘ripping babies out of their parents’ arms at the border,’ the threat of nuclear war, the fascist takeover of the United States government, and the death of migrants coming over the border. A central theme to the defense’s closing urged the jury to ‘pick a side.’”​