January 18, 2020: Refuse Fascism was at Women’s Marches inviting and challenging everyone to join #OUTNOW movement to stay in the streets to drive out this fascist regime.

From DC, Chicago, New York and San Francisco to cities and towns across the country, people brought their outrage into the streets. Home-made signs expressed fury and creativity: Fuck Trump; Welcome Asylum Seekers, Senators Do Your Job; dolls in cages representing the children being ripped from loved ones, deprived of the most basic medical care; Resist. Supporters of Bernie Sanders and Elizabeth Warren and other candidates for president were in the street as were revolutionary communists convinced that nothing less that an actual revolution can address the horrors that have led to a fascist regime. In DC and Chicago the #OUTNOW! movement that brings together EVERYONE who understands Trump and Pence must go NOW, was the channel through which the common conviction that Trump and Pence must go, NOW, got expressed and amplified. And where it had a presence, the #OUTNOW movement invited and and challenged people to join with #OUTNOW and flood D.C. as the impeachment trial begins, with mass, nonviolent protest that builds in size and frequency until it creates a political crisis that drives this regime OUT.

The following set of sights and sounds gives some sense of what we know of what happened at the Women’s Marches. Send links to your social media posts to [email protected] Follow Refuse Fascism on Twitter – @RefuseFascism – and stay tuned for updates and additions…

The Women’s March is starting! Message from @SunsaraTaylor as we step off #WomensMarch #WomansMarch2020 #OutNow pic.twitter.com/5CjfNFbS8Y

From NBC’s livestream of the Washington,DC rally: performers from Chile teach the crowd the global anti-patriarchy anthem “El Violador Eres Tu” (The rapist is you), pointing to the White House.

La Violador Eres Tu at the Trump Hotel in DC

The women’s march broke from their planned route to go to the Trump hotel.

All over the country, this week during Trumps trial, organize protests to drive out the women-hating, white supremacist, fascist regime in the White House. It’s OUR responsibility to use our power and take it forward #TrumpPenceOutNow #OutNow #WomansMarch2020 pic.twitter.com/5TC3ZwFNS2

“Join us at the Capitol. Everyday that Trump’s trial!”

Union Station, DC after the march:

We’re starting to fill Union Station in DC after the Women’s March, demanding the removal of what’s-his-name. #RemoveTrump#WeLoveDC pic.twitter.com/OhUaICXThk 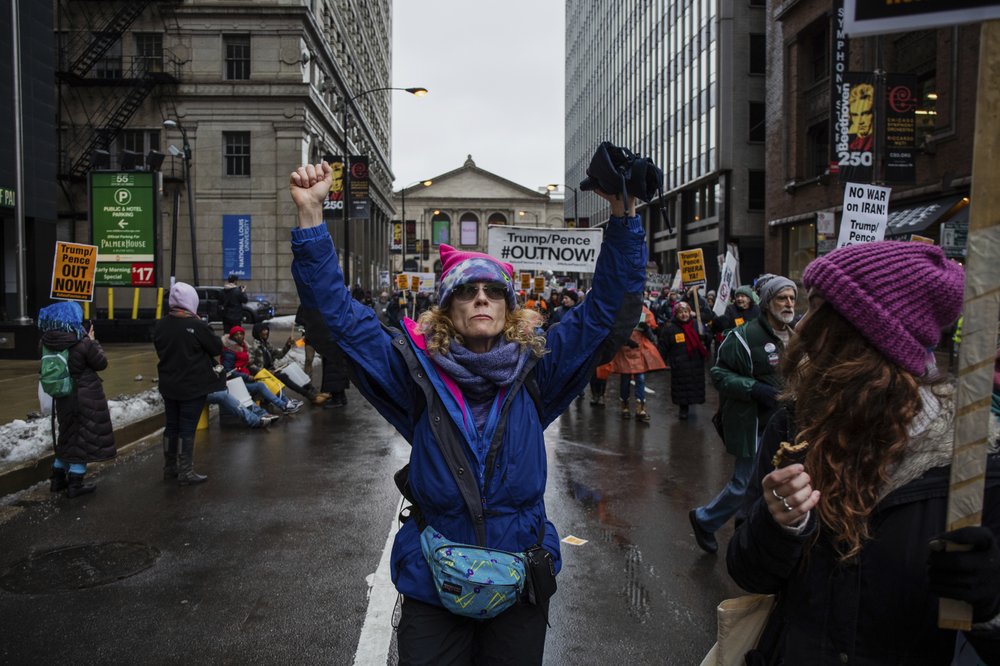 The Chicago Tribune reported on the march at the end of the official rally, which was led by Refuse Fascism:

Marchers arrived at Federal Plaza shortly after 11:30 a.m., chanting “Trump Pence Out Now,” “This is what a feminist looks like,” and “Vote him out!”
Standing in the plaza with two friends, 24-year-old Elena Vera said she felt energized by the march and what she felt were important issues on display, like immigration.
Vera said she feels Illinois has an important place in the movement, as it sits surrounded by mostly red states.

“There are so many important issues,” she said.

The crowd began to disperse from Federal Plaza shortly before noon, though many headed to Trump Tower. “We are marching to Trump Tower,” a woman shouted from a megaphone as marchers moved headed east on Jackson Boulevard.

As marchers got closer to the tower, police officers on bicycles moved the crowds to the sidewalk as they marched north on State Street. They chanted: “Trump says America first. We say humanity first.” .. Around 12:15 p.m., the marchers swarmed the area around Trump Tower, chanting: “Trump Pence Out Now.”…

Video of the march to Trump Tower

Two marches of hundreds of people each, one starting at Foley Square on the southern tip of Manhattan and marching uptown, the other marching downtown from Columbus Circle next to Central Park, met at Times Square.

In downtown Los Angeles, thousands filled several blocks as they made their way from a plaza to a park adjacent to City Hall, where a rally featured speeches by prominent California Democratic Party elected officials. In the mix, Refuse Fascism and the Revolution Club.

A group of drummers and the Nasty Woman Marching Band led the protest in Oakland, where marchers chanted “Our bodies, our lives, our right to decide!” and “Not my president!”

Danger, Danger! There’s are fascists in the White House. It’s up to us to drive them out! No one is going to do it for us!#OutNow contingent at #WomensMarchSF pic.twitter.com/TLx6xEq5ne

Sacramento Women’s March will be led by our Indigenous Women pic.twitter.com/Wov7iFB9Tv

Women’s March at Courthouse Square in Dayton was lit🔥🔥 pic.twitter.com/08Ia52lDu8