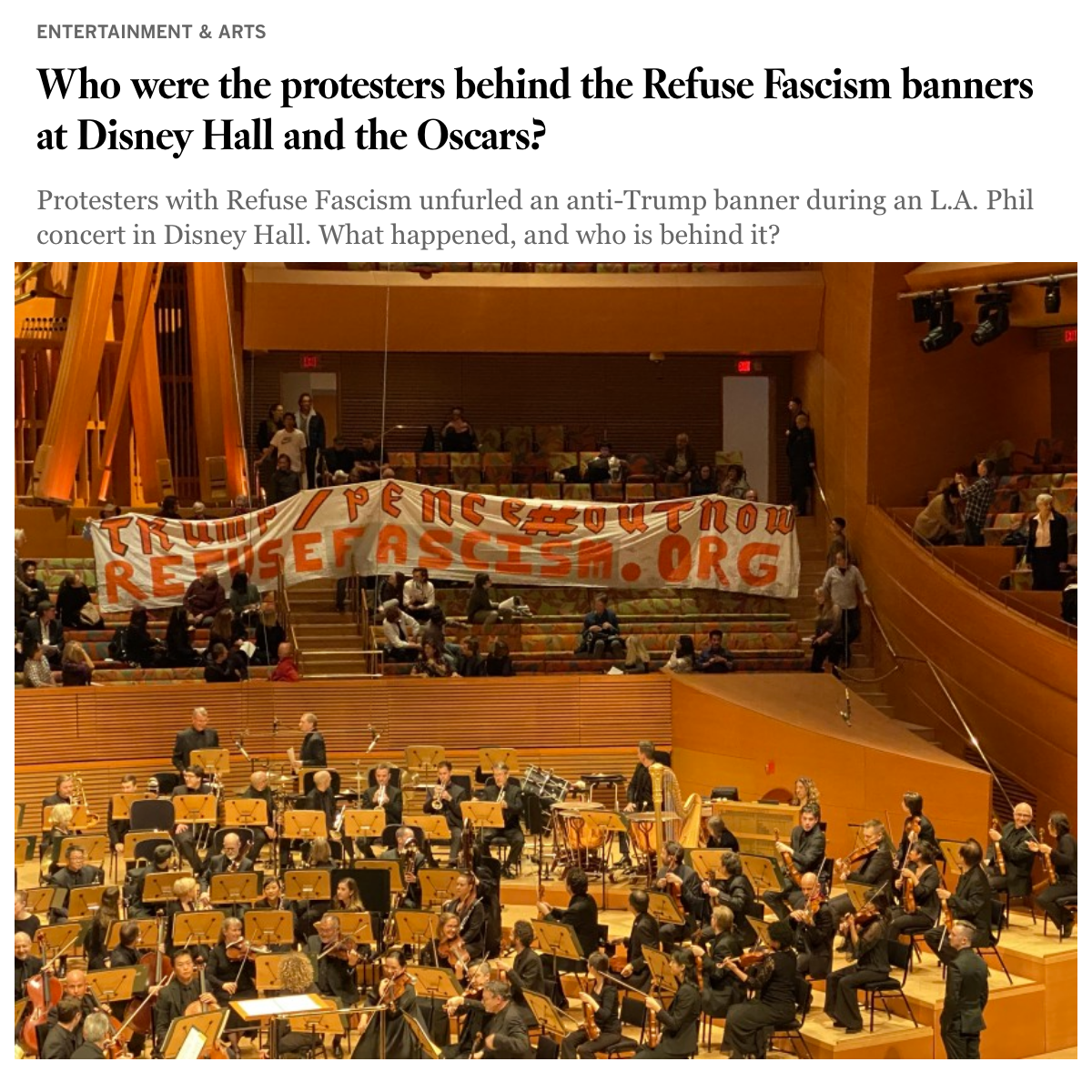 The weekend Feb 7-9 marked the opening of the LA Philharmonic’s festival “The Weimar Republic: Germany 1918-1933.”

Conductor Laureate Esa-Pekka Salonen returned to the Los Angeles Philharmonic (he is the former artistic director) to “explore this culturally explosive period and its contemporary resonances.” The LA Phil wrote: “The Weimar Republic began as a bold German political experiment at the end of the First World War and lasted until the rise of Nazism. The era was marked by incredible intellectual productivity, with German artists making lasting contributions in the fields of literature, art, architecture, music, dance, drama, and film. Berlin, in particular, proved to be fertile ground for artists, including composers Kurt Weill and Paul Hindemith. Join in a wide-ranging look at this fascinating, turbulent time.”

On Friday night a small team went to the Disney Concert Hall in downtown LA to enjoy an evening of virtuosity, and to hoist the 40 foot banner “TRUMP/PENCE OUT NOW – REFUSEFASCISM.ORG.” As we unfurled the banner concert-goers broke into exuberant applause! One person behind us called the act “a great gift.” This wasn’t a “show-stopper” – we displayed the huge banner toward the end of intermission with no intention of disrupting THIS program – yep, there were tense and even funny interactions with concert hall security, who finally realized we were supportive of the program!

Once the program ended, people made their way outside the beautiful architectural masterpiece that is Disney Hall, and toward us, grabbing up Trump/Pence #OutNOW stickers. One couple came up and said that banner hang was “fantastic and timely” and sent to us a ten-second video capturing it, which is what you see here. As we were about to leave, one of our team members, a former concert pianist, ripped out a verbal 5 minute historiography of German composer Paul Hindemith, whose symphonic work culminated the evening… off the top of his head! Wow, what an evening!

To finish this on a serious note, here is what Esa-Pekka Salonen said about the 3 week festival: “… that he has always been interested in the [Weimar] era for its ‘aesthetic, its humor and open possibilities, its artistic freedom in blending art forms and genres. But I feel there are also lessons and an urgent relevance in looking at that time today,’ adding, ‘progress is not inevitable, and perhaps we are living through something that is very similar to the Weimar Republic without knowing it.’”

If you are in So Cal, make an effort to get downtown to see this festival – the LA Phil concert programs are augmented with a collection of commissioned installations, exhibitions, performances, cabarets, and even a closing day/night film marathon presented in collaboration with American Cinematheque.