Columnist Charles Blow dubbed them the “Legion of Doom.”

They are theocrats, war criminals, & Neo-Nazis.

They are the cabinet Donald Trump and Mike Pence would install if they were to rule. 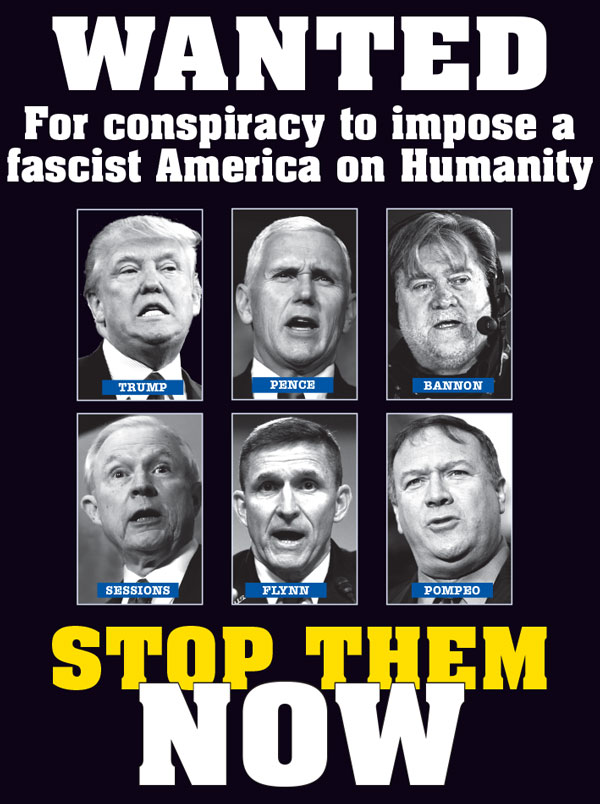 One of Donald Trump’s first decisions as president-elect was to name Steve Bannon his chief strategist and senior counselor. Bannon managed Trump’s campaign. Before that he was the owner and hands-on force behind the website Breitbart News Network. Mainstream news and Bannon himself call Bannon’s politics “conservative,” “alt-right,” or “white nationalist.” It’s worse than that.

On June 17, 2015, Charleston, South Carolina: nine people at a Bible study class in the Emanuel African Methodist Episcopal Church were murdered by white racist Dylann Roof. Roof said he carried out the massacre to start a “race war” to turn America back to the days of open segregation. He posed online with pro-Hitler symbols and a confederate flag. Part of the response, very broadly throughout society, was an eruption of outrage against the confederate flags, flags of slavery and lynching.

Breitbart’s response: an article headlined “Hoist It High And Proud: The Confederate Flag Proclaims A Glorious Heritage.” Steve Bannon ran Breitbart when this article was published. He signed off on it, and as a hands-on editor likely instigated it….

Mike Pence: A Christian Fascist Who’s a Heartbeat Away from the U.S. Presidency

The United States will now have a vice president who wants to ban all abortions, overturn laws barring discrimination against LGBT people, fully unleash the police to stop and frisk Black and other oppressed people, and carry out other extreme steps that will lead to horrible new leaps in repression. Mike Pence cites Bible verses to back up such ugly policy stands. He is a Christian fascist who will be #2 in the White House.

One of Trump’s sons reportedly said before the election that his father’s vice president will be “the most powerful vice president in history,” in charge of domestic and foreign policy while Trump concentrates on “making America great.” Trump’s people denied the report—but, in any case, Pence will wield enormous sway. He is already playing a major role, including choosing cabinet and other officials. He met top Republicans in the House of Representatives and told them to “buckle up” to move quickly, making clear he’ll play a leading role in pushing fascist laws through Congress. As writer Jeremy Scahill put it (in an article at TheIntercept.com), “Mike Pence will be the most powerful Christian supremacist in U.S. history.”

Pence is part of a Christian fascist movement that aims to impose on society a government, laws, and dominant morality based on strict interpretations of the Bible. According to a Slate.com article, when Pence was a congressman from Indiana, “Aides and other politicians often saw him reading his Bible, and Pence would cite specific verses to justify policy arguments. ‘These have stood the test of time,’ he told one staffer. ‘They have eternal value.’” He made an anti-evolution speech on the floor of the House saying he believes in “intelligent design” (an unscientific claim that life is too complex to have evolved and must be the work of God) and arguing that it be taught in schools.

Donald Trump has chosen retired Marine Corps General James “Mad Dog” Mattis as his Secretary of Defense.  He’s the latest addition to Trump’s storm trooper team.  Mattis’ mantra: “Be polite, be professional, but have a plan to kill everyone you meet.”

Mattis’ got his nickname “Mad Dog” for his role in leading U.S. troops in laying waste to the Iraqi city of Fallujah in November 2004, massacring insurgents and civilians alike.  Most of that modern city of 300,000 was completely destroyed, reduced to rubble. At least 60 percent of those killed were women, children, and the elderly. A correspondent wrote: “There has been nothing like the attack on Fallujah since the Nazi invasion and occupation of much of the European continent—the shelling and bombing of Warsaw in September 1939, the terror bombing of Rotterdam in May 1940.”

Donald Trump selected the longtime Alabama white supremacist (and U.S. senator) Jefferson Beauregard Sessions III to be the next Attorney General of the U.S.

Sessions first gained national attention in 1986, when he was nominated for a federal judgeship by Ronald Reagan. In his confirmation hearings, it was exposed that in 1984 when he was a U.S. Attorney in Alabama, Sessions led the prosecution of three Black civil rights workers for attempting to register Black people to vote in areas of Alabama where virtually no Black people had been able to vote—near the infamous town of Selma. They faced 100 years in jail. The three were acquitted by a jury in four hours.

In his confirmation hearing, an associate testified that Sessions had called a white civil rights lawyer a “disgrace to his race” for litigating voting rights cases.

A Black former assistant US attorney, testified that Sessions “stated that he believed the NAACP, the Southern Christian Leadership Conference, Operation PUSH and the National Council of Churches were all un-American organizations teaching anti-American values.” And that Sessions said he believed the Ku Klux Klan was OK until he learned its members smoked marijuana, something the former U.S. attorney testified was not a joke, but something he took as “a serious statement” of Sessions’ views.  Sessions made this contemptible statement about the KKK in the aftermath of a trial of two Klansmen for slitting the throat of a Black man in Mobile, Alabama.

Mike Pompeo wants to expand the government’s ability to spy on millions. He advocates legalizing and carrying out torture. He champions gutting fundamental civil rights. Now Trump has named this Congressman and former Army officer to head the Central Intelligence Agency—the CIA—one of the most powerful and deadly arms of the U.S. government’s repressive apparatus.

Pompeo opposed ending the ability of the National Security Agency (NSA) to collect phone records, or metadata, in bulk. Instead, he called for Congress to expandspying and “pass a law re-establishing collection of all metadata, and combining it with publicly available financial and lifestyle information into a comprehensive, searchable database. Legal and bureaucratic impediments to surveillance should be removed.” (Wall Street Journal, January 3, 2016)

By any conventional standards, Ben Carson is an obscene joke as Secretary of Housing and Urban Development (HUD). Less than a month ago, Carson’s close friend Armstrong Williams said Carson felt he would “cripple the presidency” in a cabinet position, because, “Dr. Carson feels he has no government experience, he’s never run a federal agency.”

But there is a fascist method to this madness. Trump’s choice of Carson to head up HUD puts someone who wants to decimate public housing and shut down any governmental interference with segregation, and who is a Christian fundamentalist lunatic to boot, in a powerful position in the U.S. government.

Ben Carson says any attempt by the government to address housing discrimination is a “mandated social-engineering scheme.” He says the micro-thin safety net that provides poor people, inner city residents, and Black and Brown people with barely livable shelter­—if that­—in dangerous projects and filthy homeless shelters is too much—that it just encourages “dependency.” What do you think an appointment like this means to people for whom the existing, shitty government programs are a matter of survival?

Donald Trump has nominated Betsy DeVos for Secretary of Education.

Betsy DeVos heads The American Federation for Children. This is an organization that describes itself as “the leading national advocacy organization promoting school choice, with a specific focus on advocating for school vouchers, scholarship tax credit programs and Education Savings Accounts.” (emphasis added)

School choice: Allowing white parents to avoid sending their children to integrated public schools. This strips public schools of funding. It leaves them with a high number of special-needs students and without resources to provide a decent education to children.

School vouchers: A tool for channeling state funding into private, religious(overwhelmingly Christian) schools. And thus having the government fund Christian schools, even though that is supposed to be unconstitutional. Parents get vouchers and can use them to pay tuition for segregated, Christian schools.

Scott Pruitt is Trump’s Pick to Head the EPA: A Regime Dead Set on Destroying Life on Earth

Scott Pruitt is Donald Trump’s nominee for head of the Environmental Protection Agency (EPA). As Attorney General of Oklahoma, Pruitt has been a rabid attack dog for the fossil fuel industry. He fought even the very limited steps the Obama administration took to try to contain global climate change. He has fought clean air and water rules that have been in effect for decades. Pruitt, and the Trump regime, represent an extreme escalation of the danger humanity faces.

Scott Pruitt is a climate change denier. He would head the EPA for a president who belligerently, and with no scientific backing at all, declares climate change a hoax. Pruitt is obsessed with shredding obstacles to fracking. In Oklahoma, that has led to disastrous environmental disaster already. In a state that use to be essentially without earthquakes, fracking has lead to a situation where one Native American Indian reservation suffered 816 earthquakes in one year. He was point man in fighting to extend the dangerous Keystone XL pipeline. He is a cheerleader for coal mining. His record as Attorney General in Oklahoma was one of literally transcribing lying propaganda from oil industry lobbyists and submitting it on official government letterhead to federal agencies.

Trump’s choice for Energy Secretary is Rick Perry, the former governor of Texas. All the mainstream press pointed out that while running for president in 2012, Perry stated in a televised presidential debate he planned to eliminate three federal departments but then forgot the name of the third, the same Department of Energy he’s now been appointed to head.

As funny and bumbling as this makes him look, there are much more frightening ramifications tied up with Perry’s appointment than being a buffoon. The Department of Energy is in charge of designing nuclear weapons, watching over the U.S. nuclear arsenal, and developing and guiding energy policy. It is very influential in deciding the direction of basic science in the U.S.

Now U.S. nuclear and energy policy will be in the hands of a man with a stated hostility to facts and science and with deep connections to Christian fundamentalist fanatics.