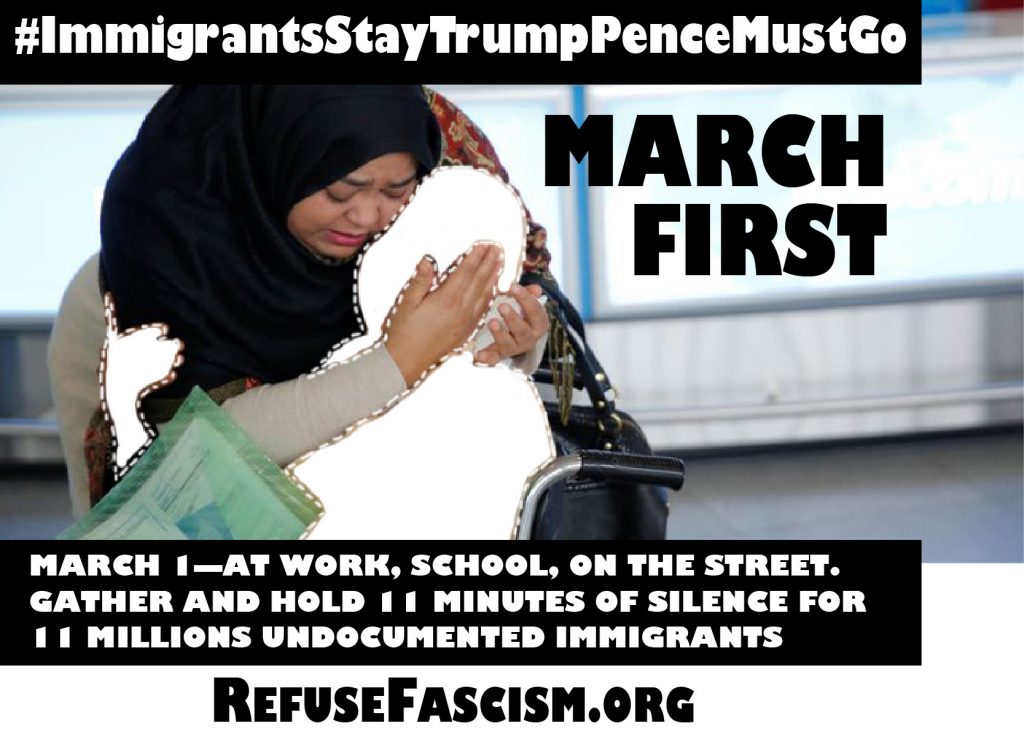 Yesterday Donald Trump gave a vicious white supremacist, xenophobic speech full of dog-whistles to his base at the Conservative Political Action Conference. He called immigrants “snakes” waiting to prey on citizens.  (‘The Snake’: How Trump appropriated a radical black singer’s lyrics for refugee fearmongering)

This is fascism at work on people, through fomenting racism by portraying a group of people as less than human and opening the way for racist attacks and government action to remove them.

We need your help to make Thursday March 1 a moment when people stop what they’re doing to make a public statement that immigrants are human beings who have the right to live unmolested by government threats.  These are our sisters and brothers.

RefuseFascism.org calls on everyone to Wear Black and demand Immigrants Stay – Trump/Pence Must Go!  At work, at school, on the street: Gather and hold 11 minutes of silence for 11 million undocumented immigrants.

IF the word can get to student and faith leaders, to people with public influence, and across social media — which takes money — hundreds of thousands could take visible, united action at their schools, public squares and workplaces showing that we will not accept the cruel and brutal future of the Trump/Pence regime.  Now is the time for everyone to come to the defense of those first and most viciously under attack and strengthen the movement to drive the fascist Trump/Pence regime from power.

In our millions we are powerful. Help spread the word. Donate today to stand up against Trump’s comprehensive and white supremacist attacks on immigrants and immigration.  Stand with DACA youth, with Temporary Protection Status (TPS) recipients, with immigrant rights leaders threatened with deportation, and with those in detention right now. Stand with those whose families have already been torn apart and those who live each day with that fear.

Our goal is $10,000 this week, to be used immediately for promotion – particuarly on campuses – and coordination of March 1 actions.  Two donors have pledged to match the first $3,500.  As soon as you donate, your gift will be matched.

Will you give more than ever before and double its impact?