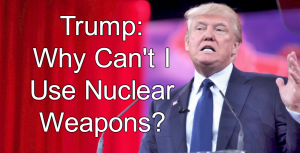 September 20  On September 19 fascist gangster Donald Trump stood before the United Nations Security Council and threatened to annihilate an entire country – North Korea – and its people. “The United States has great strength and patience, but if it is forced to defend itself or its allies, we will have no choice but to totally destroy North Korea. Rocket Man is on a suicide mission for himself and for his regime.”

Trump is not some isolated lunatic. He was reading a prepared speech before an assembly of the worlds’s leaders. He was making a declaration from his entire fascist cabal. His regime is hell-bent on war. It is an immediate mortal threat to the 25 million people of North Korea, and in fact to the entire planet.

The Crimes Against Humanity of the Trump/Pence Regime

Like a wife-beating husband, Trump coupled bogus concern for the people of North Korea with a promise to incinerate them. He presented the United States as a long persecuted victim. The false claim of victimhood is a crucial part of fascist ideology. But never has there been such a gap between perceived victimhood and actual power.Trump has his finger on the nuclear trigger, and has threatened to use it. He is in command of the world’s largest military and largest nuclear arsenal – by far. He has questioned why he shouldn’t use nuclear weapons. It is not exaggeration, it is truth that the Trump regime poses a greater danger to the people of the world than Hitler did.

Why would anyone with a conscience and a beating heart not do everything they can to end this nightmare?

Raise the alarm, throw yourself with all the passion, creativity, energy, and determination this cause deserves and needs into organizing, preparing for, and letting everyone know about what begins on November 4. In the name of Humanity, this Fascist Regime Must GO!