Starting on July 18, Refuse Fascism has been organzing actions and uniting with others around the country demanding:

Federal Crackdown on Portland:
No more police murder of  Black People, No fascist police state, No fascist Military War on the People, No Federal Agents Sweeping Up Protesters
TRUMP/PENCE OUT NOW!

Refuse Fascism on the Ground in Portland 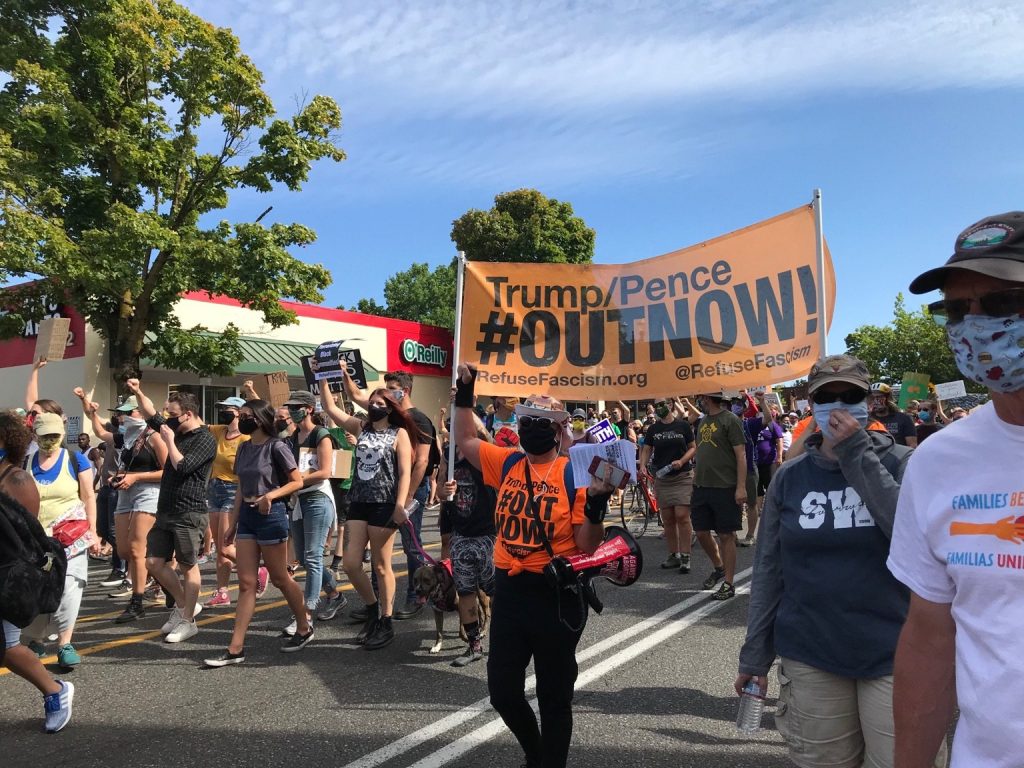 NYC: If we want a different future, if we don’t want fascism, we’re gonna have to do the uncomfortable thing – stay in the streets

“If we want a different future, if we don’t want fascism – we are gonna have to do the uncomfortable thing and get in the streets.” –@Sabel_Boo w @RefuseFascism #TrumpPenceOutNow #Biden2020 pic.twitter.com/OqBt9hF5D0 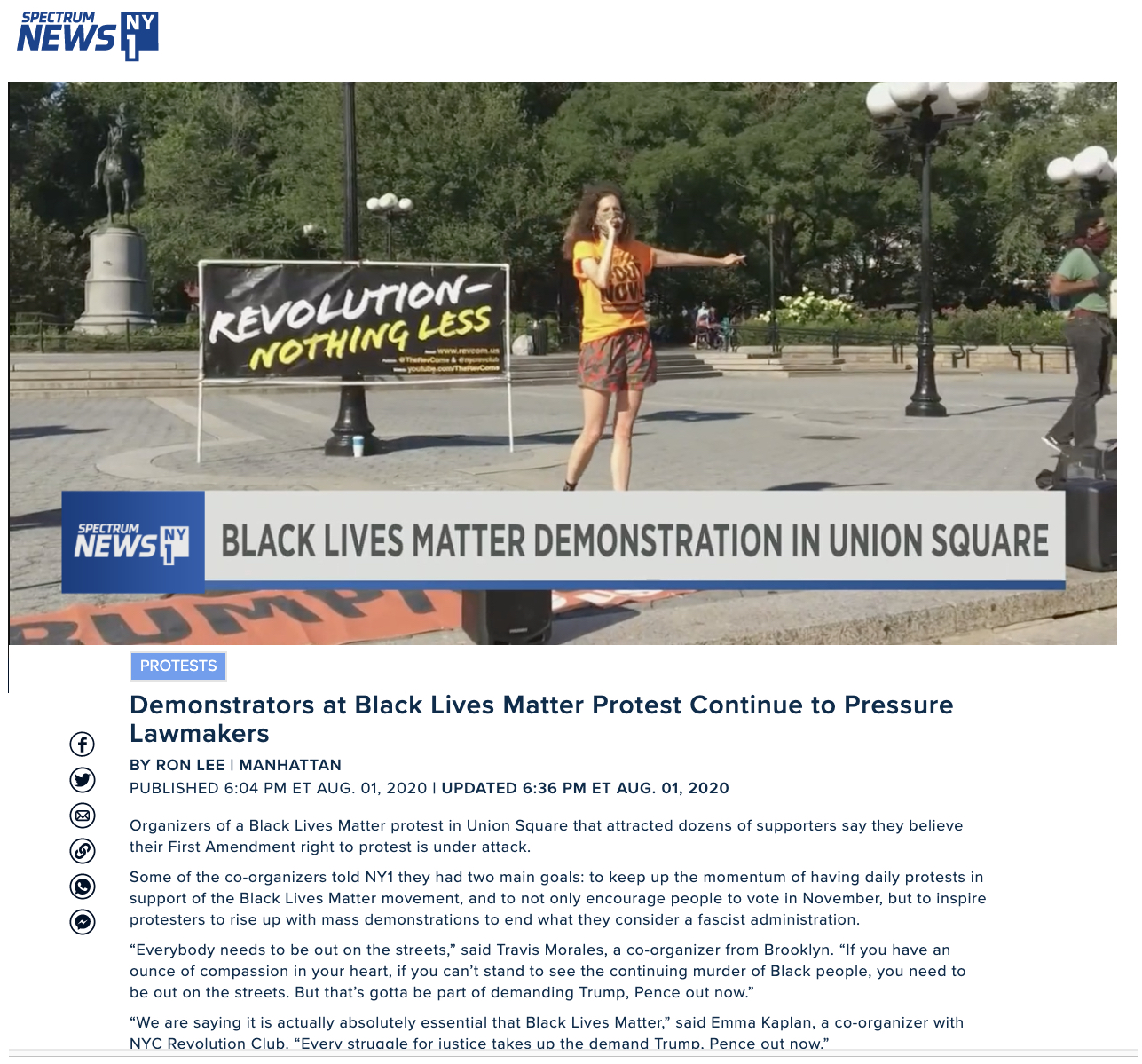 Some people in Refuse Fascism LA joined with the Revolution Club in a march through South Central Los Angeles in blistering heat. The RevComs brought out, in Spanish and Englsh, the genocidal agenda behind the fascist federal pigs sent by the Trump/Pence regime to Portland and other cities and project “Legend” to escalate repression of Black and Brown people in Chicago and other places.

On the streets of South Central LA, Chantelle from Refuse Fascism challenges people: because Black Lives to Matter, because Trans Lives Matter, because Immigrants Lives Matter, you have to confront that we are dealing with a fascist regime, and ACT on that and drive them out through sustained nonviolent protest. 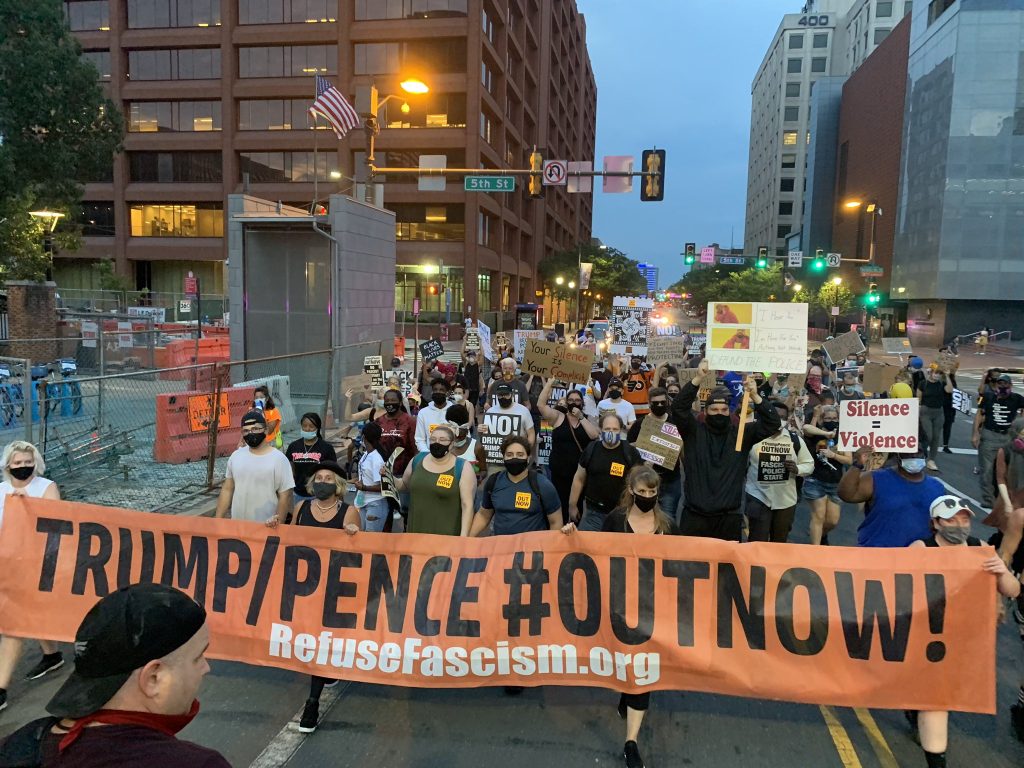 #RefuseFascism speak out at the SF Federal Building. “These people decided that they can defy the Constitution, that they are emperors and kings.” “We should really be doing more!” “Trump and all of his fascist nazis must go!” pic.twitter.com/RFuNWgi3H5

Quanah Parker Brightman of United Native Americans: I’m proud to be a member of #RefuseFascism We’re united in this coalition to defeat Trump, to defeat Pence, all of those right wing fascist evil people who are trying to rewind our clock, which is set at 2020 back to the 1800s.” pic.twitter.com/beEKJ7Rmhh

#RefuseFacsism marching to SF Federal Building against #TrumpGestapo. We will not tolerate what they are doing in Portland anywhere. We will not let it spread across the country. TRUMP/PENCE #OUTNOW pic.twitter.com/YFLcIHQOA9

Beautiful scene in front of Trump Tower. People taking the pledge to refuse to accept a fascist America. If we stay in the streets & demand #TrumpPenceOutNow, we can drive out this hated regime.
Chip-in: https://t.co/AwpuKHFgP2
Follow: @RefuseFascism pic.twitter.com/zvEbQQZA6d

No Trump!
No KKK!
No Fascist USA!

Out in the streets saying HELL NO to #GestapoTrump and a fascist police state!

Thrilled to have #itsskxttlles send us off for a march to a TBD location. On 16th and 6th ave join us. #refusefascism #outnow pic.twitter.com/pXSX8LNr8g

We are at a serious crossroads. We must stay united in the streets like Portland with the aim of ousting this regime

#FedsOut of #Chicago & #Portland No #Fascist Police State: #TrumpPenceOutNow we need an end to institutionalized racism &murder by police- an end to any way people anywhere are used, abused, &brutalized. We need a Revolution- Nothing Less! Join the club in #LA for a march 8/1/20 pic.twitter.com/x1HklwBbZl

“We must REFUSE fascism!”#ResistanceTaskForce #1 mission: get in the streets, stay in the streets demand #TrumpPenceOutNow & don’t stop till demand is for won! pic.twitter.com/ZFIsIwvUSi

From Wounded Knee to Portland. Quanah Parker Brightman of United Native Americans speaks at #RefuseFascism press conference in Oakland. “As Indigenous People we’re sick and tired of seeing the army and fascist gestapo coming in.” This dictator the White House needs to go NOW! pic.twitter.com/p3TJPJXf8j

“If this isn’t the time, when is? This is a dress rehearsal for a full on fascist state. Waiting for November is like waiting for rain when your house is on fire.” Barry from #RefuseFascism speaks in front of Oakland City Hall (boarded up) in solidarity with #PortlandProtesters pic.twitter.com/259QphJMtF

Protesting #TrumpsGestapo
No Fascist Police State #TrumpPenceOutNow
In the name of humanity, we REFUSE to accept a fascist USA!
Stay in the stay in the streets & drive them out!
Sign-up :https://t.co/2DnuG9STL3
Donate: https://t.co/1bylvXk0wG
#WallAgainstTrump pic.twitter.com/a6I2CVpWvP

As part of a survey of the protest terrain, the NY Times (7/25/2020: Fires and Pepper Spray in Seattle as Police Protests Widen Across U.S.) noted the presence of Refuse Fascism in the mix:

Protesters in several cities said the smoke-filled videos of federal agents firing tear gas and shoving protesters in Portland had brought them to the streets on Saturday.

“Portland is leading,” said Chantelle Hershberger, an organizer with Refuse Fascism who was part of the Los Angeles activists protesting the presence of federal agents in Portland, where city officials have opposed the presence of the federal officers. “They’re showing what it looks like to stay in the streets despite police oppression, despite the federal forces being sent in. This kind of energy is actually what’s needed.”

Bipasha Mukherjee, 52, of Kirkland, Wash., said she has been protesting on the streets since May and said it was worrisome to her to see such aggressive tactics by the police.

“This is not the country I immigrated to,” said Ms. Mukherjee, who arrived from India more than 30 years ago. “It feels like we are rapidly becoming a fascist state and a police state.” 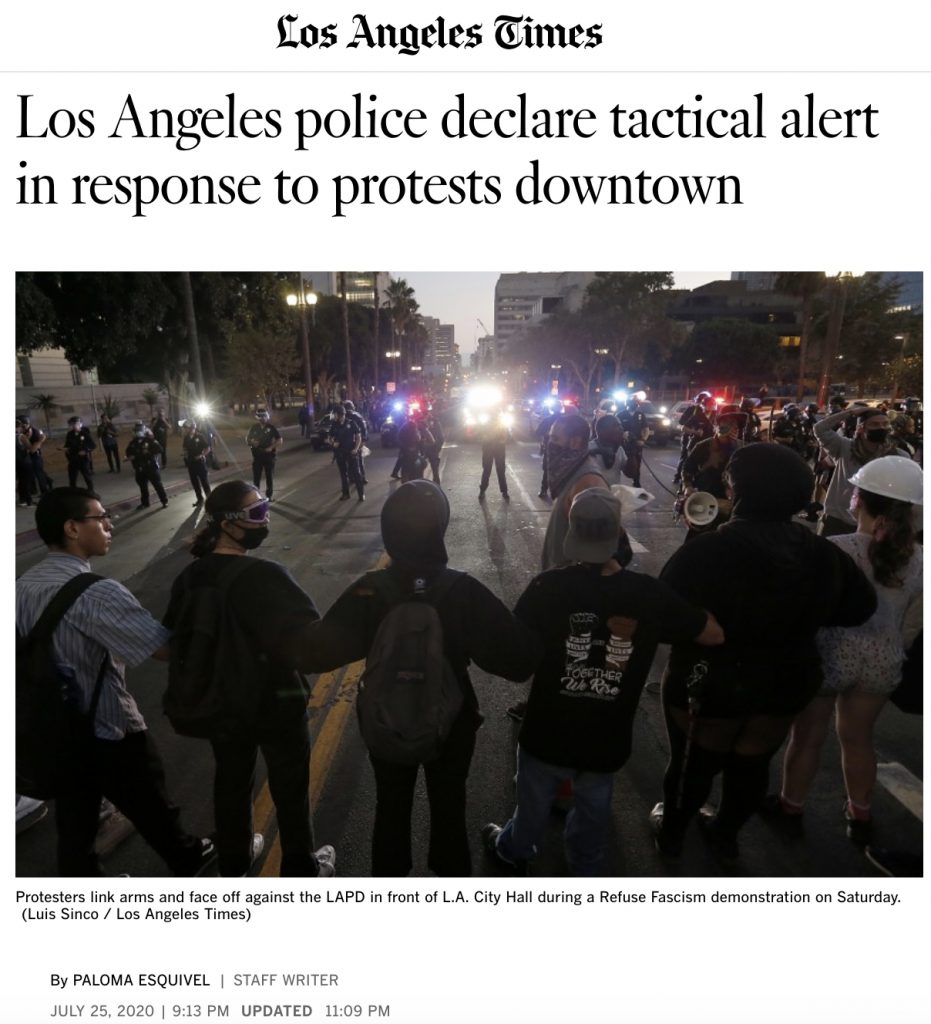 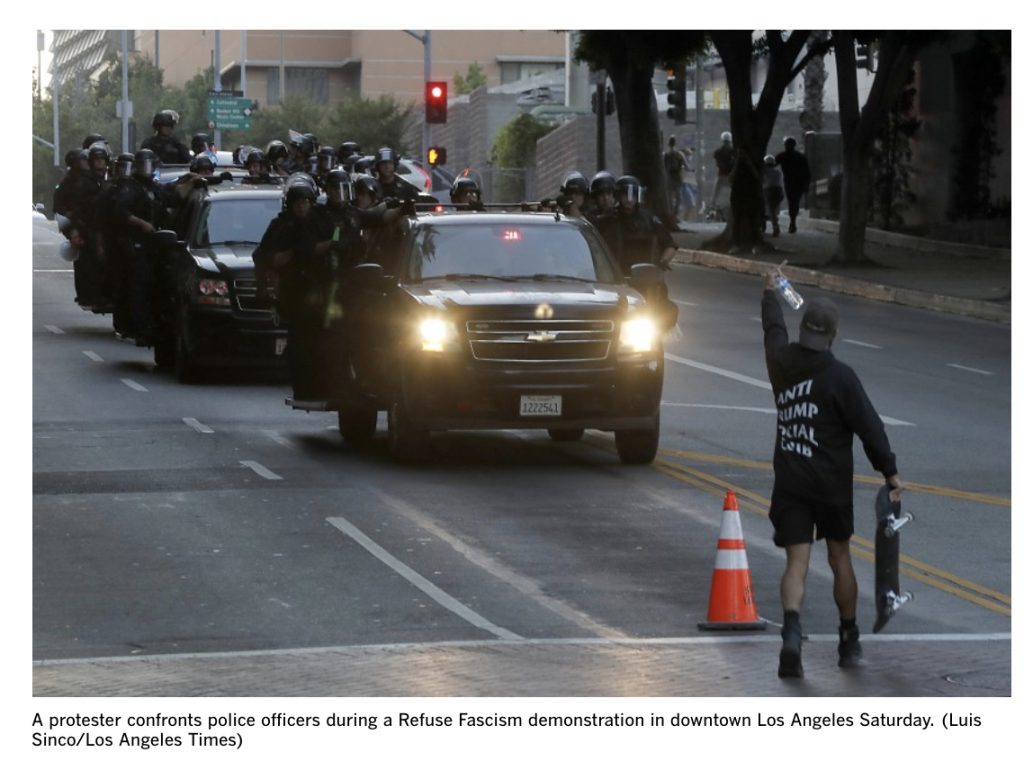 NYC July 22 – In the Streets, in Pouring Rain, Responding to Trump’s Threats to Send Stormtroopers  into Major Cities

Out in PHILLY protesting the escalation of fascism
NO FEDERAL AGENTS SWEEPING UP PROTESTERS
TRUMP/PENCE OUT [email protected] pic.twitter.com/cxsLxti14v

“In the name of humanity we refuse to accept a fascist America” pic.twitter.com/SriIaqUCke 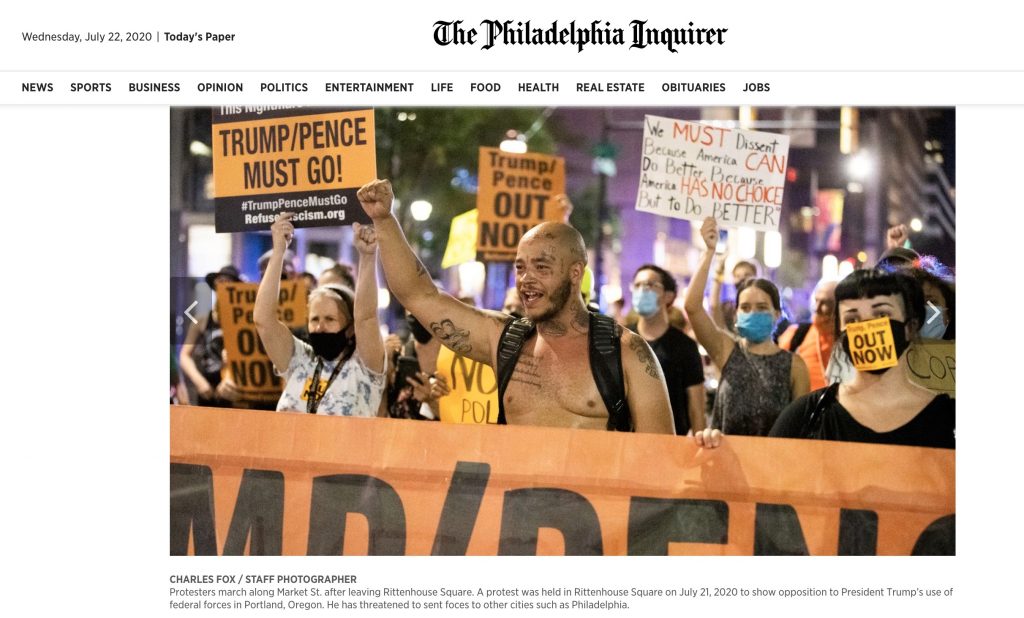 – Read: Dispatch from the frontline in Chicago

“We Stand With Portland! No Fascist Police State!”

To all who saw Portland and knows damn well it’s a dress rehearsal for other cities, we say HELL NO!

This Trump Pence Fascist Regime CANNOT get away with #PortlandKidnappings! @emmancipator: Portland is a dress rehearsal of what is it to come if we don’t drive these fascists from power. #TrumpPenceOutNow

“Why can’t this be the movement, that not only drives that bloated bag of fascist feces to his bunker..but that drives this fascist regime OUT of the white house..” @JamNoPeanut #TrumpPenceOutNow#PortlandKidnappings

Marching today with @RefuseFascismLA in #DTLA to stand with the protesters in Portland and everyone rising up against the injustices of this system. We must not allow the fascist Trump pence regime to crush his dissent and opposition. #TrumpPenceOutNow #PortlandKidnappings pic.twitter.com/auiaGZ5PQv

Chantelle from @RefuseFascismLA calling for people to unite around the demand #TrumpPenceOutNow connecting the reality of all that is at stake if this American fascism consolidates. pic.twitter.com/pfDpxbc9lM 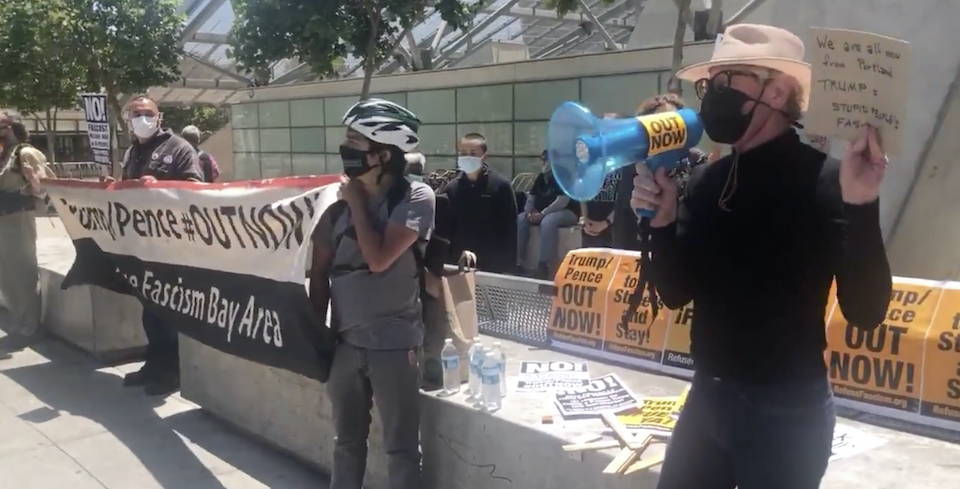 Her child asked “why are we still here?” as Trump has done things that evoke what Hitler did. She said, if we are still here, then we better be DOING SOMETHING”. #OutNow #PortlandProtests #TrumpPenceOutNow https://t.co/hG3x1Ax19p

“Around the world, hundreds of thousands in the streets have driven out hated tyrants. But if people think they are going to go into a voting booth and put an end to this fascist hell then we are deceiving ourselves.” #RefuseFascism at SF protest against #PortlandKidnappings pic.twitter.com/Lf9UwiFhJu