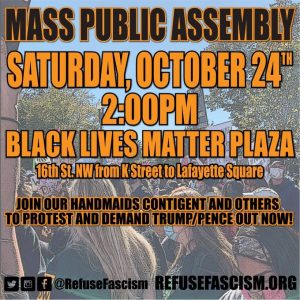 Trump Is Already Stealing the Election.
WE NEED TO VOTE,
BUT TRUMP WILL NOT BE STOPPED JUST BY VOTING!

Find or host a public assembly in your area

Generate a flyer with time & place for your area, with this call on the front and the Pledge to the People of the World on the back

Or adapt and print this PDF

Trump is already stealing the election. Black and Latino people forced to stand in line 12 hours to vote, mail-in drop off locations shut down during a pandemic while armed white supremacist MAGA militias are being mobilized to intimidate.  NOW IS THE TIME TO STAND TOGETHER IN THE STREETS AND PUBLIC SQUARES EVERYWHERE…SATURDAY OCTOBER 24 WE WILL ASSEMBLE IN PROTEST, TO PLAN AND ORGANIZE.

Trump Is Already Stealing the Election.
WE NEED TO VOTE,
BUT TRUMP WILL NOT BE STOPPED JUST BY VOTING!

This is the time to be in the streets demanding
Trump/Pence OutNow!

We must vote in big numbers.  But, the reality is that voting alone will not stop Trump. The illegitimate rushed confirmation of a theocratic fascist, Amy Coney Barrett to the Supreme Court who is for the immediate purpose of throwing the election to Trump should he lose. Trump and Amy Coney Barrett refuse to commit to a peaceful transfer of power.  We face a rolling coup — a theft of an election — heading to a showdown November 3.

Let’s unite and rise like we did in the Spring for Black lives, coming back day after day in non-violent protest – now united by the demand Trump/Pence OutNow! and refusing to stop till they’re gone.

If we base what we do on “news” dominated by the unrelenting hatred and threats at Trump’s rallies on the one hand, and “polls” that Biden is winning and Biden urging us to “just vote” while the Trump/Pence regime steals the election, humanity will lose.

We can change the political situation, holding fast to principles of non-violence, yet determined to prevail. Our numbers, our diversity, and our heart for humanity can sustain us through whatever the Trump/Pence regime tries to do to remain in power. As we grow, we will inspire millions more to join this great struggle, until those in power, to stem the rising tide of protest, are compelled to concede to our single demand that the regime must go.

On Saturday, October 24, come one and all into the public square for mass protest assemblies to demand Trump/Pence Out Now!  Let us show the world that we are uniting, with courage and conviction, to drive the Trump and Pence from power.

In the Name of Humanity, We Refuse to Accept a Fascist America