In the Face of Trumpite Rallies: Humanity First not America First,

On May 1, Refuse Fascism activists carried out inspiring and heroic counter-protests against pro-Trump, white supremacist, anti-science, virulently mysogynist so-called “ReOpen America” rallies in several cities. In Los Angeles in particular, counter-protesters from Refuse Fascism and the Revcoms persevered in nonviolent but defiant and determined protest while repeatedly threatened and assaulted by violent fascist thugs.

An NBC News piece on Friday morning quoted Andy Zee, Refuse Fascism co-initiator, saying, “In a society where Black people, Latinos, and Native Americans are already dying at disproportionate rates, who do you think will be sacrificed in order to re-open America and get the economy going again?” Other protests on May 1st demanded protection for essential workers, prisoners, and immigrants held in concentration camps. They included protesters with fake body bags at Time Square in New York City; and nurses who stood in front of the State Center in downtown Chicago and held a banner telling the fascist rally, “Nurse Are Dying. Go Home.”

At protests it called, and united with, Refuse Fascism called out the Trump/Pence regime for using the COVID-19 crisis to intensify persecution of immigrants, subject prisoners to extreme risk of death, force people of color to bear the cruelest brunt of the crisis, and on top of all that, to advance moves drastically change how society is ruled – to implement fascism.

In contrast to the anti-scientific, fascist mob in LA holding a “Reopen America” rally @RefuseFascismLA & @therevcoms stood up for the needs of humanity and demanded that the Trump/Pence regime must go NOW.

From the LA Daily News

John Mena, a counter protester, is here with Refuse Fascism. He says we need to stay closed, otherwise, “we’re sending people to the slaughterhouse.” @ladailynews pic.twitter.com/jSVtRhlGKf

NYC: Out here opposing the fascist “Re-Open America” rally in downtown Manhattan. Trump’s goons are rallying today in service of the Trump/Pence regime consolidating fascism. His Stormtroopers are mobilized.

Our people are dying. And on this #MayDay caravan, we have now arrived in Times Square to demand that the pain and death be seen, as we demand a #Recovery4All. pic.twitter.com/Bhz5KCN1bH

Chicago May 1: No Trump, No KKK, No Fascist USA pic.twitter.com/7hZDARM47O

Nurses at a counter-protest today in Chicago…

Why isn’t the media covering the nurses and warehouse workers protesting across the country?

Instead covering militias with guns… pic.twitter.com/WIcpGD4xtM 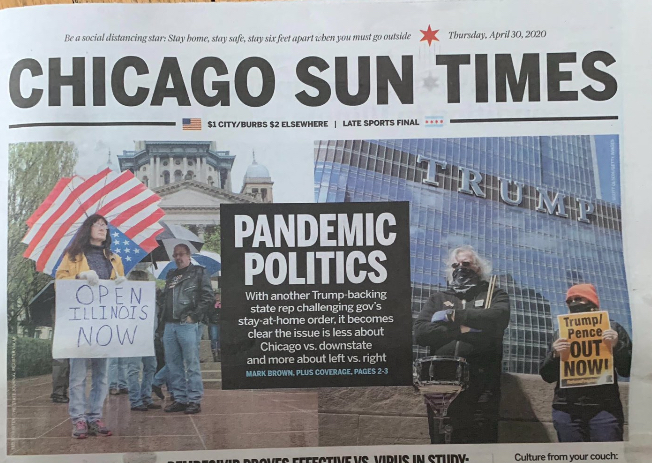 In contrast to the anti-scientific, fascist mobs holding “Reopen America” rallies – based on a callous disregard for public safety and human life – RefuseFascism.org supporters in several cities will hold counter-protests, press conferences, and symbolic actions, while observing social distancing and safe practices, to stand up for the needs of humanity and demand that the Trump/Pence regime must go NOW.

The Trump/Pence regime’s catastrophic response to the COVID-19 pandemic has already cost more than 50,000 lives in this country.  Its attacks on science, embrace of end-times Christian fascists, its constant lying and bludgeoning of the very notion of truth, and white supremacist scapegoating of immigrants and foreigners threatens millions of more lives here and around the world. The U.S. now leads the world in COVID-19 cases and deaths.

Powerful fascist forces including the Koch-funded Convention of States Action, the Devos family, Infowars, and Trump himself have instigated, funded, and organized these rightwing rallies in order to support a president and regime that endangers the future of humanity and the planet. Far from standing up for civil or economic rights, these mobs are being unleashed to enforce and advance the fascist program of the Trump/Pence regime; a program of terror against immigrants; attacks on abortion rights; suppression of voting rights; rebellion against Democratic governors; scapegoating foreigners, political opposition, and the press; and open white supremacy. This is on full display at these rallies, where misinformation and conspiracy theories are peddled and many come heavily armed, waving their American and Confederate flags. They say the cure is worse than the disease when they know full well that COVID-19 is disproportionately affecting and killing Black people, poor immigrants, the infirm and elderly.

NO MORE COLLABORATING WITH A FASCIST REGIME THAT HAS DONE GREAT HARM AND WILL DO MUCH WORSE IF THEY ARE ALLOWED TO CONTINUE WITHOUT MASSES OF PEOPLE ACTING TO DRIVE THEM FROM POWER.

The 2020 Refuse Fascism Statement of Conscience/Call to Act states,

“There are times in history when a people must reach deep into their collective conscience and act with extraordinary moral courage to stop the crimes of their government.

We must say out loud what has been too often spoken in whispers and riddles. An American fascism is here and advancing, wrapped in the flag and Mike Pence’s Bible taken literally—spreading its poison of white supremacy, misogyny, xenophobia, and oppressive, fundamentalist “traditional” values.

Participants in May 1 actions will available for interviews. Video will be posted at Facebook.com/RefuseFascism.